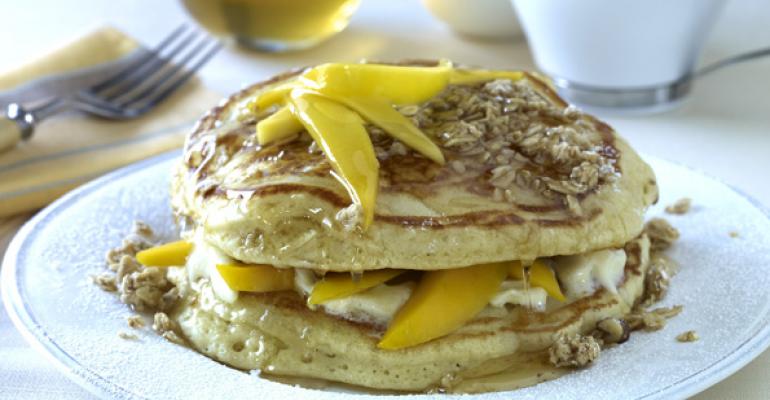 Strategies for building your breakfast reputation

Interjecting personality and variety into morning meals may be a winning strategy for building business. In fact, according to Datassential (2013), 70 percent of all breakfast operators added a new entrée to their menu in 2012, with egg dishes among the fastest-growing items. The same source reports that 48 percent of restaurants are now serving breakfast, up from 36 percent in 2007. Given today’s competitive picture, it pays to be on the lookout for ways capture a bigger market share, whether with grab-and-go or linger-and-luxuriate specialties. Here are several examples of ways to create craveable breakfasts.

• Build on the classics: Serving breakfast every day from 7 a.m. until 3 p.m., Jelly Cafe in Denver features among its choices Benedicts, Scrambles and a half-dozen types of hash ($7.99-$8.99). The latter are topped with two eggs, and come with a choice of toast and homemade jelly. Executive chef David Payne’s hash options range from classics like Corned Beef Hash and rustic Red Flannel Hash to Curry Tempeh Hash, Vegetable Harvest Hash, Roasted Turkey Hash and Sweet Potato Hash with chorizo, onion, celery and roasted poblano pepper.

• Experiment with flavor: At Porter House New York, executive chef/managing partner Michael Lomonaco says “play with your food” is his motto for 2014. His Raspberry Stuffed French Toast is an example of this philosophy. “Lately, I have been having fun with stuffed French toast—fruit and berries, Nutella, country ham. The fuller stuffed version is more interesting, a creative inspiration and fun for guests. Anything goes, and the egg and cream batter can be adapted to the flavor profile of the stuffing. Cardamom, allspice or clove can go along with the cinnamon to make the whole dish even better with wines and cocktails.”

• Create irresistable twists: Popularized at The Brindle Room in New York City by chef Jeremy Spector, Mashed Potato Donuts with Salted Caramel Glaze demonstrate how menu items can be familiar yet compellingly out of the ordinary. Currently on the brunch menu at The Brindle Room: Challah French Toast ($11) with banana and Nutella, and the Potato Chip Frittata ($10), with cheddar, scallion and paprika.

• Tweak tradition: Hotcakes are elevated into Bliss Cakes at M. Henry in Chicago with luxurious concoctions such as Blackberry Bliss Cakes ($9.25). Who can resist hotcakes layered with warm berries and vanilla mascarpone cream, and topped with a brown sugar and oat crust? Other variations created by Michael Moorman include Mango Bliss Cakes.