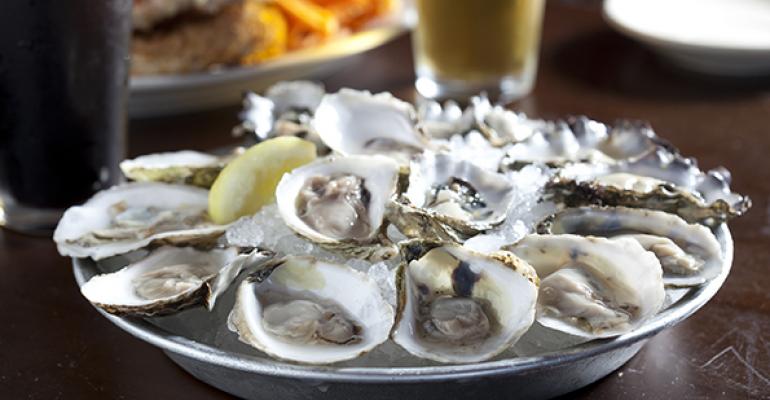 With more than 100 oyster species (and fans, no doubt, for each type), National Oyster Day (Aug. 5) presents a perfect chance to showcase the oyster varieties grown closest to home, or a comparative tasting of different types. Which will it be at your restaurant—the smaller, saltier and milder East Coast oysters or the sweet, creamy West Coast varieties?  The local or regional connection to oyster varieties can be strong, too, because most are named for the body of water where they’re grown.

For a limited time, Ocean Prime Beverly Hills is participating in California Wine Month with its Flavors of Sonoma menu. Inspired by the seasonal flavors of wine country, each of three entrees is promoted with suggested white wine pairings. West Coast Oysters on the half shell ($19), for example, are paired with Matanzas Creek Sauvignon Blanc or Arrowood Vignier “Saralee’s.”

In New York City, the Grand Central Oyster Bar’s National Oyster Bar celebration pays homage to the bivalve with dishes such as The National Oyster Day Power Platter ($21.15) with a combination of eight oysters from both the East and West Coasts. During August, the Oyster of the Month selection is The Chilled Long Island Naked Cowboy Oyster. The five-piece special, is served with citrus sake mignonette and salmon caviar ($12.95).

At The Pour House locations in Exton, PA, and Westmont, NJ, National Oyster Day is celebrated with “Buck-a-Shuck” Oysters and craft beer specials. Buck-a-Shuck Night also takes place every Wednesday, with more than 30 craft beers on tap (and 133 bottled craft beer selections) to wash down the bivalves.

August dining promotions at Big Sur Oyster Bar in the South Point Hotel, Casino & Spa in Las Vegas include the “What the Shuck!?” lunch specials. Included are half-price oysters and clams on the half shell. Louisiana Gold Seal Oysters are shucked fresh afternoons in the open kitchen, Monday through Thursday.

The following recipes provide more ways to feature oysters on your menu.