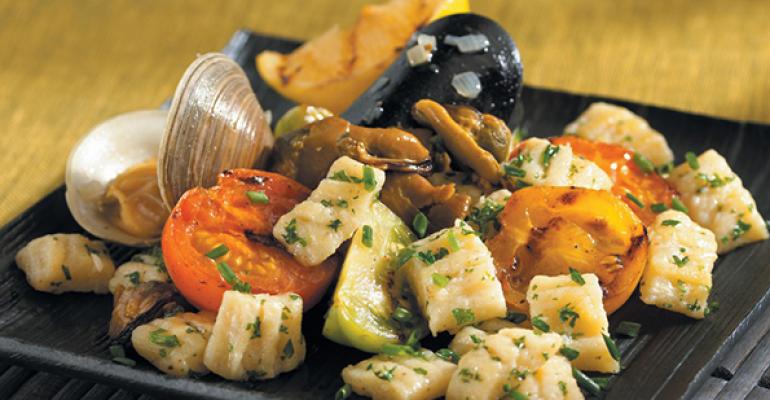 October is the perfect time to step back and take a critical look at your pasta offerings. World Pasta Day is celebrated on October 25; October also happens to be National Pasta Month. But pasta is always appealing. According to the National Pasta Association, the average North American eats 15½ pounds of pasta per year; in Italy, the average person eats more than 51 pounds.

The International Pasta Organization (IPO) and Oldways are working on the Third Healthy Pasta Meal Scientific Consensus Conference, part of the World Pasta Day & Congress taking place in Milan, Italy, October 25 to 27. Riccardo Felicetti, chairman of the nonprofit IPO, says, “We want to tell a story about how pasta can really make a difference at tables all around the world, from both a nutritional and environmental point of view. Pasta is a healthy carbohydrate-containing food at the center of traditional eating patterns around the world such as the Mediterranean, Asian, Latin American and vegetarian diets, and is one of the most environmentally friendly foods to produce.”

Among restaurants observing National Pasta Month in the U.S. are the Brio/Bravo Restaurant Group, offering LTO promotions pairing pasta and wine. The restaurants partnered with Barilla Pasta and Porta Palo Wines. Chefs from more than 50 Bravo! Cucina Italiana locations competed to create one of three dishes featured company-wide in the “Share the Love of Pasta” promotion during October. The chef who creates the top-selling dish will win a trip for two to Italy. Among the three features are Sausage and Pepper Spaghettini with Oven-Roasted Tomatoes. Similarly, chefs from the 63 Brio Tuscan Grille locations created dishes for “The Art of Pasta” promotion. Among the three featured pastas is Chicken, Sweet Potato and Brown Butter Campanelle.

Elsewhere, chefs tap into unexpected flavors, ingredients and pasta shapes (more than 600 are produced worldwide) for creative pasta ideas. Chef Lou Piuggi’s menu at Naples Ristorante e Pizzeria e Bar in Bethesda, MD, features seasonal pasta specialties, such as gnudi (creamy cheese dumplings). He shares his recipe for Gnudi with Crab, Spring Peas and Lemon. In spring, the dish is garnished with fresh pea sprouts and squash blossoms, but garnishes shift with the seasons. At Nostra Spaghetteria & Bar Mia in San Francisco, chef Alexander Alioto’s Angnolotti Stuffed with Chicken Thighs is a dish inspired by his travels to Italy.