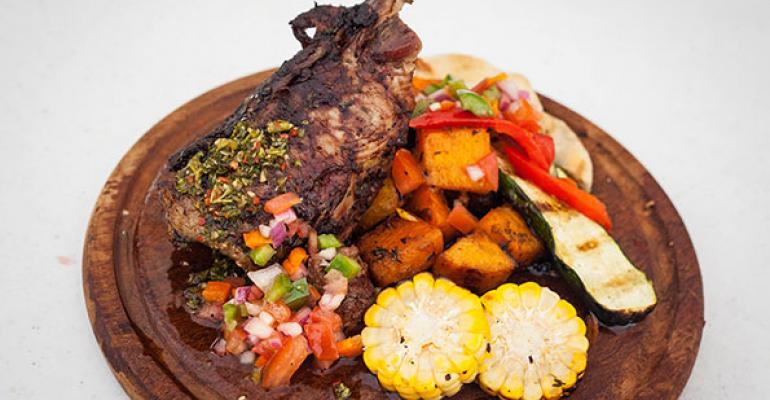 Spices, ingredients and cooking techniques for Latin regional cuisines are widely embraced by U.S. consumers. The culinary exchange works both ways, too. For example, Evandro Caregnato, culinary director at Dallas-based Texas de Brazil restaurants, notes that lamb chops are now among their most popular menu items. “Lamb chops are recent addition to most churrascarias, since this was not a cut of meat that the gauchos would traditionally prepare—it was too fancy and expensive.” But more sophisticated diners’ tastes, he says, have changed all that. Another lamb idea is the Patagonia-style lamb from chef Reina Morris of Buenos Aires Café in Austin. The dish is served with chimichurri sauce.

Taco updates include Orange Chipotle Turkey Tacos from celebrity chef Jill Davie. Wonton Tacos from Chef Richard Sandoval at Zengo in Denver are also a crowd-pleaser. “Charred tuna wonton tacos at Zengo are a favorite of our guests,” Sandoval says. “They provide the perfect fusion of Latin and Asian cuisines.”  The tacos feature sushi rice, mango salsa, guacamole and pasilla flavors combined with the crunch of the taco. At Tamayo, also in Denver, Chef Sandoval’s Smoked Brisket Tacos are among the restaurant’s top five best-sellers. He says they’re about as far away from fast-food tacos as one can get. “Brisket is a flavor powerhouse, and slow-simmering dissolves its tough parts into succulence. I give this recipe a Latin twist with guava for an especially tasty sauce.”

Quesadillas are another Latin-inspired casual dining classic. The Mango and Brie Quesadilla recipe from Cheeky’s in Palm Springs, CA, combines fruit and cheese. Another variation, Quinoa Risotto and Sweet Corn Quesadillas, branches out by incorporating some Mediterranean influences.

Reinterpret bread and cheese combos for bar snacks
May 19, 2015