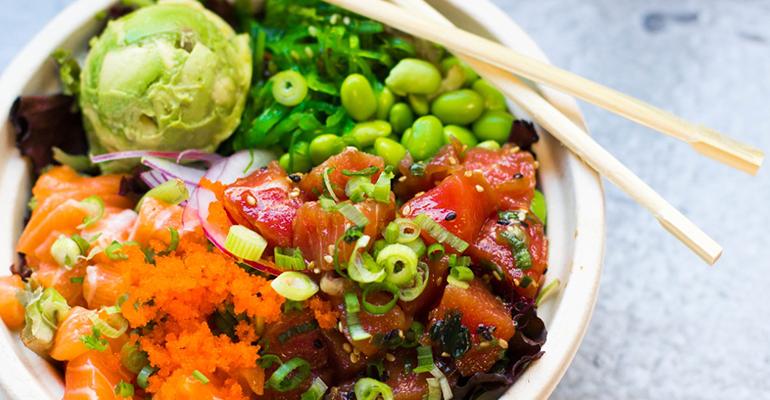 Whether you call them ghost kitchens, virtual restaurants or delivery-only hubs, restaurants without a physical brick and mortar location are taking over the restaurant industry. But while many of these concepts start from scratch as a food brand without a façade, Poki Time — a fast-casual poke restaurant based in San Francisco — has had the opposite experience.

Co-owner Doug Wong is converting all three of his Poki Time restaurants to delivery-only hubs, in partnership with Virtual Kitchen Co. Only their newer concept, Tuna Kahuna — which opened this spring as an upscale fast-casual restaurant in Burlingame, Calif. — will remain a traditional brick and mortar store.

In 2016, Poki Time opened its first location at the beginning of the poke bowl boom. After they opened two subsequent stores in the San Francisco area, poke was everywhere, and the Poki Time team found themselves scrambling to both stand out from the growing mass of poke spots, and to keep up with the growing demand for delivery.

“When our stores first opened three years ago, they were almost 100% in-store purchases, but now just last year one of our stores was almost 40% delivery,” Wong said. “You have to be able to adopt to meet consumer demands. […] We try to embrace change and find the best way to move forward.”

Like many business owners, Wong was drawn to the prospect of improving his bottom line by skipping out on real estate costs and lowering the cost of labor.

“Restaurants don’t have the ability scale in the way that other companies can,” Wong said. “When we invest money into one restaurant, it does well and we want to expand, then we have to take a whole bunch of money and we’re back in the red building out a new location.”

After a soft launch a few weeks ago of their new virtual concept, Wong has expanded the reach of Poki Time without needing to invest in exorbitant brick and mortar expenses. They can deliver poke bowls – for an average ticket price of $15-$20 — to his customers out of their ghost kitchens. They currently partner with all of the major third party delivery apps, including DoorDash, GrubHub, Uber Eats, Postmates, and Caviar.

“We’re going after markets we never had the opportunity to even think about in the first place,” Wong said. “We’re talking about locations we always wanted to consider, but did not have the bandwidth or personnel to do so.”

Luckily, Wong said that he has not had to cut staff in order to make this transition — it has just shifted responsibilities and eased tensions in the store.

Before converting entirely to virtual restaurants, Wong said that getting the technology to play nicely together — through integration of iPads and POS systems — was challenging at best. But now they have new challenges that go along with the growing pains of the delivery industry.

“We’re working on different problems now,” Wong said. “In traditional restaurants, you have to interrupt your line to figure out the latest DoorDash order and then the customer has to wait 5-10 minutes after they place their order for the restaurant to even register it. We’re working on it so it’s almost an instantaneous response time.”

But just because Wong has shifted his attention to delivery, does not mean that real-life restaurants are completely out of reach. Six months ago, Wong opened up his new restaurant, Tuna Kahuna, where their poke bowls stand out by showcasing unusual fusion ingredients, like white truffle oil, cured egg yolk, and unique pickles. He also plans on opening more brick and mortar concepts in the future.

“I don’t think dining is dead in the water,” Wong said. “Most people will say ‘it depends’ if you ask them if they prefer delivery or to go out, and it’s up to us to create that incentive.”