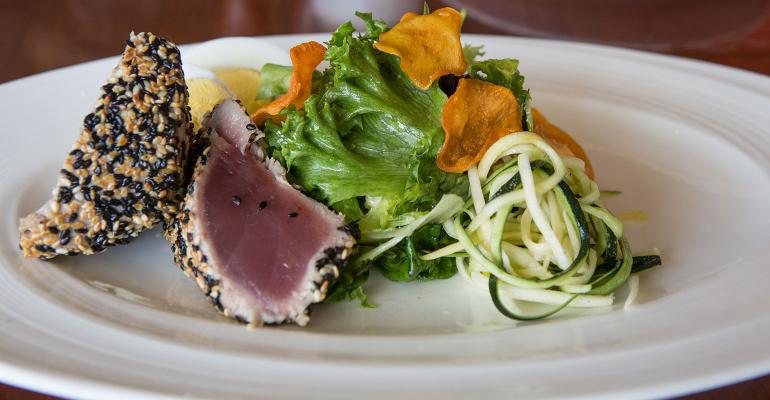 Grapefruit — both the fruit itself and its flavor — is trending in dishes that appear across restaurant menus, as well as in beverages. This citrus fruit is particularly popular at fine-dining restaurants, according to FONA International. For instance, Reef in Houston serves snapper carpaccio in grapefruit agrodolce, and Cielo in St. Louis offers a seared tuna dish with mixed green salad, heirloom cherry tomatoes, potato chips and grapefruit dressing.

Sisig gets ready to sizzle Trend watchers have cited Filipino food as the next big cuisine poised to sweep the U.S. Their predictions have gained clout as notable restaurants serving the foods of the Philippines pop up, such as Bad Saint in Washington, D.C., and Irenia in Santa Ana, Calif. While Filipino food is not yet mainstream in the U.S., one dish in particular has the potential to win over American stomachs: Sisig. Media personality and food-hall developer Anthony Bourdain tells CNN Philippines that the sizzling dish of chopped bits of pig head and liver could take off in the U.S. "I think sisig is perfectly positioned to win the hearts and minds of the world as a whole," Bourdain said. (Photo by Samantha Celera/Creative Commons)

Turmeric, the brightly colored spice best known for its place in Indian cuisine, is only on 2 percent of U.S. restaurant menus, according to Datassential. However, it’s becoming more popular, with 154-percent growth on menus over the past four years. Turmeric is a deep orange colored, ground spice made from a rhizomatous plant in the ginger family. Find out more about turmeric. There’s a significant generation gap when it comes to how consumers of different age groups interact with restaurants, according to a recent survey by American Express. The survey sheds light on the unique habits of Millennials, Gen X and Baby Boomers. Here are three key points pertaining to restaurants: • Delivery: To-go service is increasingly important to Millennial consumers, who seek the convenience of having restaurant food delivered. At the NRA Show in May, Rhonda Abrams, a small business advocate, discussed the survey results. “People want to eat at home or in the office or in a park,” she said. Millennials are also more likely than older generations to order delivery on a mobile app or website. According to the survey, 62 percent of Millennials used these options over the past month, compared with 28 percent of Baby Boomers. (Photo by Natashaphoto/iStock/Thinkstock)

• Tipping: The state of tipping is in flux across the industry as some operators seek to do away with the practice. Consumer support of tipping breaks down across generational lines. Baby Boomers are least likely to say they prefer not to continue tipping, while Millennials are the most likely to not wish to continue to tip. When they have to leave a tip, and when paying with a credit card, Millennials are most likely to do so with cash, compared with Gen X and Baby Boomers.

The impact of delivery apps

Delivery is becoming a must-have for restaurant operators, and apps are an increasingly popular way for consumers to utilize the service. But do mobile delivery apps steal dine-in business? The answer is no, according to a recent survey by Sense360. After tracking 21 million anonymous quick-service and full-service restaurant visits, the survey found no dip in in-person visits after the consumer downloaded a delivery app. With consumers expecting more from what they eat and drink, functional beverages are becoming increasingly popular. One strain of functional beverages is protein-infused drinks. Coffee, tea and beer are all getting pumped up with the addition of protein. Coffee and tea — daily beverages for many consumers — are prime candidates for the add-on, with 44 percent of American consumers saying they would like to add healthful ingredients to these beverages, according to Mintel. These beverages are traditionally served in the morning, but consumers can get an evening functional-beverage fix with protein-added beer. Mighty Squirrel beer has 4 grams of protein per serving, compared with 1 gram for most other beers, and targets active, health-conscious drinkers, FONA International says. The beer debuted nationwide last year after strong strong sales in its home market of Boston.