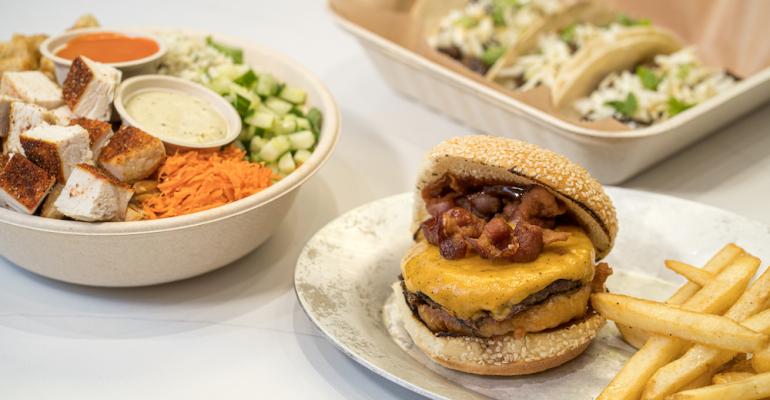 This modular, multi-menu operation is designed to maximize efficiency and transparency

Dubbed Swift Eats, the 900-square-foot ghost kitchen’s most visible brand is Swift Salad. When diners order in the restaurant, they can walk the line to build their own salad, choose a house-made option or warm bowl, in the style of Sweetgreen.

Also on the menu, however, are three back-of-the-house brands: Swift Burger, Swift Taco and Swift Wings. Guests can order from any of the brands as walk-ins, but also for delivery through the company’s app and third-party partners.

Dine-in is not a big part of the model. The unit has a small outdoor patio with eight seats, but no seats inside.

Co-owners Jeffrey Kaplow and Brandon Mohammed conceived of Swift Eats in 2020 as a concept built around efficiency and transparency, saying customers want to see where their food comes from.

Kaplow and Mohammed are also Subway franchise owners. Kaplow operates three Subway locations in New York City and Mohammed four — though none together.

The Swift Eats model is designed around the idea of never sacrificing food quality, which is often where restaurant operators cut costs, they said.

The Swift Eats menus are built around high-quality, locally sourced ingredients. The idea is to streamline operations to minimize both labor costs and food waste. Every ingredient is used across the sister concepts — many in all four.

“The places that are using the type of ingredients we’re using — those high-quality ingredients — their price point is much higher than ours,” Kaplow said. “It comes back to the efficient kitchens and the minimum waste. Whereas they’re wasting product, we’re very rarely wasting any product. And where they might have to have three cooks to cook a burger concept, we could have two cooks in the back cooking for all four concepts.”

On Swift Wings menu, for example, are jumbo, never-frozen wings that can be fried or baked with seven flavors, or the vegan Buffalo Cauliflower Jumbo Wings. The taco menu might feature chicken Tinga or herb-roasted vegetable tacos.

Menu prices for entrees range from $7.89 to $14.89, with most items falling between $10 and $12. Each concept features meat and fish options, and all but Swift Burger feature vegetarian options.

Swift Eats encourages customers to order through its own website or app by offering a rewards program and lower delivery fees than third-party apps.

Deliveries on orders placed through the Swift Eats platform are completed by Relay, a last-mile delivery fulfillment provider. But Kaplow and Mohammed said they plan to employ their own drivers when they reach roughly 35 to 40 delivery orders per day.

Kaplow and Mohammed treat this first location in Manhattan as a test run and an opportunity to build their brand. With its placement near the business-heavy Midtown neighborhood, Swift Eats currently generates most of its sales through Swift Salad during the weekday lunch rush and through corporate catering. Kaplow said the next step may be a Jersey City-based location geared toward serving suburban families.

“We need to be opening stores in very different areas to understand where Swift Eats will be most effective,” Kaplow said.

The modular structure of Swift Eats’ concepts is essential to Kaplow and Mohammed’s plans for growth. In addition to the four concepts currently available, they have seven or eight others ready to implement — including one with a brunch menu on deck for early 2022 — offering flexibility depending on each location’s needs.

Swift Eats locations could also serve as rentable kitchens for outside brands.

“In the future, we're more than open to renting out some of our spaces to other brands to bring down our costs,” Kaplow said. “If we were like a Cloud Kitchen and we were to build out a space that had a front of house, as well as eight compartmentalized kitchens in the back, if we're not able to rent out four or five of those kitchens, we can safely put in our own concepts, remain at a 100% occupancy, until maybe somebody wants to come in.”

The long-term goal is a franchise model, but Kaplow and Mohammed intend to wait on that until they can determine what works best for the Swift Eats brand across multiple locations.

“It has to be manageable,” said Mohammed. “The soul of the business kind of becomes delineated when you go into franchise.”

To reach that point, Kaplow and Mohammed intend to emphasize the physical presence not just of their current location, but of all future ones they may open.

“Our whole thesis here is that having a presence in an area with a footprint, with transparency, with customers being able to come in and know that this is going to be here,” Mohammed said. “The concepts may switch, but Swift Eats will be here. That will be consistent.”