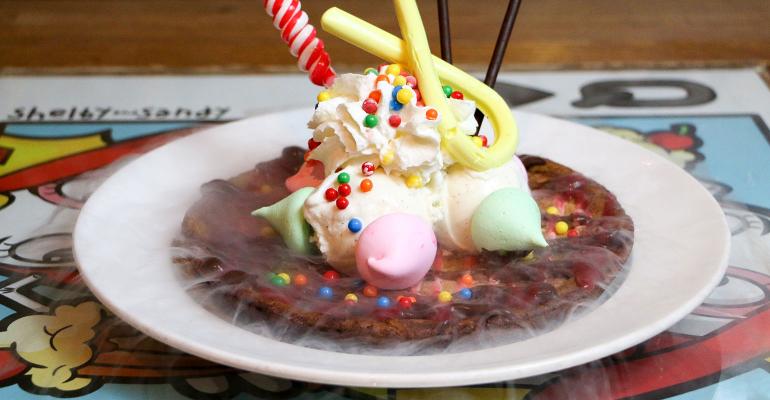 At a time when there are many options to beat the summer heat, sundaes, cones and cannoli with a base of vanilla ice cream get dramatic upgrades

Burger-and-shake venue Holsteins has had a lot of success with its Bam-Boozled shakes, the boozy, candy-coated darlings of social media. Just as photogenic — and maybe even more fun — is the Udder Chaos sundae (pictured above). “I wanted to create something over the top…similar to our shakes, but in sundae form,” says Rebecca Bills, executive pastry chef. The sweet chaos begins with a large chocolate chip cookie and three scoops of vanilla ice cream. Then, the sundae gets shivery-sweet with strawberry and peppermint nitro meringues (dipped in liquid nitrogen right before serving so a wispy vapor trails off the plate). The dish is punctuated with novelty candies like micro jawbreakers, chocolate Pocky Sticks, banana Laffy Taffy and a rainbow lollipop. The laid-back, always-summer vibe of the San Diego ice cream scene allows for this gravity-defying swoosh-shaped cone at Pokewan, a grab-and-go poke spot with locations in Carlsbad and Del Mar. The South Korean-inspired cone is shaped by hand in-house in many colors with an unexpected ingredient: puffed corn. The Jolly Cane’s texture has been compared to Corn Pops cereal, and it’s filled with vanilla soft-serve then topped with sprinkles. “We wanted to incorporate something fun that people would enjoy,” says James Pyo, executive chef/owner. “It looks interesting, and it’s not something that’s well known.” (Photo courtesy of Pokewan) Andia Xouris started her ice cream catering business, The Freezing Pointe, North Carolina’s Triangle, specializing in creative ways to incorporated ice cream into special events (think blue and pink ice cream for a gender-reveal baby shower). Eventually, though, Xouris wanted something more down home, a place to welcome friends to enjoy scoops. So Andia’s Homemade Ice Cream, opening in Cary, N.C., in late June, fills that void with the motto “scoop with love.” These cannoli are on the new menu, and they’re a summery take on the sweet Italian classic. (Photo courtesy of Andia’s Homemade Ice Cream)