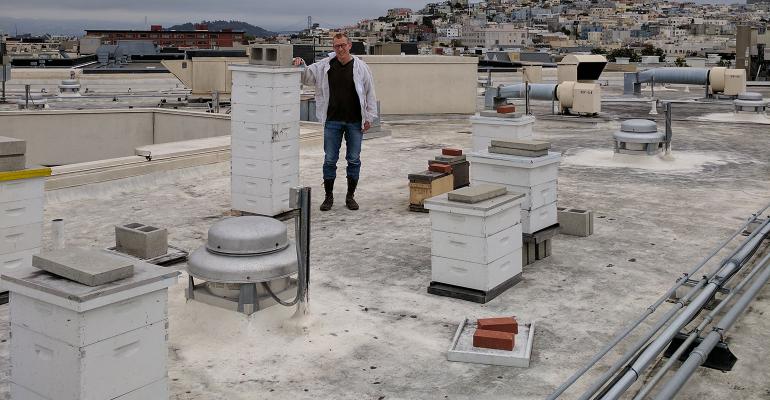 Hyper-local honey: A chef and a beekeeper talk bees

Should restaurants tend their own hives?

Several times a week, Daven Wardynski, area executive chef at the Omni Amelia Island Plantation Resort on Amelia Island, Fla., suits up to go out and spend some quality time with his bees.

At the Omni, Wardynski keeps beehives in a tropical garden over a rickety footbridge, where you can hear the buzzing before you see the busy activity.

For him, it’s about the product: honey, which he’s used like liquid gold, infusing his menus with a luxurious, local touch.

“It doesn’t get more local than this,” said the chef.

He’s created dishes like pitas with a honey sauce, numerous salad dressings, panna cottas for dessert and even upscale hot dogs drizzled with honey. Wardynski marvels at the way the flavor of the honey can change throughout the year.

Wardynski is among a small but growing number of chefs who are installing hives on their rooftops or properties, not only to produce hyper-local honey, but also to pollinate adjacent gardens and help reverse rapidly decreasing bee populations. For restaurant operators thinking of raising bees, Wardynski offered some advice: Partner with a pro.

Roger Garrison, for example, is proprietor of A Bee Well Production, a San Francisco-based company that partners with businesses and individuals and has placed 50 beehives in seven hotels, a grocery store and residences in the Bay Area.

He’s been beekeeping for years, but “I prefer to call it bee-tending, because you’re a steward of the bees,” Garrison said.

When working with managers and chefs at the hotels, Garrison has the ability to see things that non-professional beekeepers may miss, intent as they may be in protecting their bees.

“I work seven days a week,” Garrison said. “Every location gets touched every week. If you don’t go, sometimes you may miss the fact that the queen is failing and you may need to bring in a brood from another hive.”

When a new location expresses the desire to maintain beehives on the property, Garrison emphasizes how important it is to get buy-in from everyone in the business he’s working with.

“When a beekeeper and a chef and a business owner are working together, that’s the perfect triangle,” he said.

Location is important, and Garrison doesn’t recommend restaurants putting hives in super-close proximity to the dining area, because not every guest is comfortable being that close to our buzzing buddies.

“And look at your location and put your hives in a spot where you can actually work — lifting boxes and frames — I’ve gone to a location where they put the hives on a hillside where it’s really awkward to work,” Garrison said. “I tell them eventually you may want to move this hive.”

Across the country, Wardynski kept the same considerations in mind, saying the key is finding a space where bees will flourish.

When Wardynski started beekeeping at the Omni a few years ago, wonderful weather and afternoon rains resulted in seven colonies of bees being able to produce 1,000 pounds of honey. But in the next year, a significant drought in Florida took a toll, and only about 300 or 400 pounds of honey was produced.

Back in San Francisco, Garrison tries to create an environment that fosters “survivor colonies,” which last more than two or three years.

To get the hives started, Garrison will often order packages of bees from beekeeping clubs and organizations. It’s an iffy proposition, though, with a big learning curve.

“At one location, I brought in five packages of bees, and four of the five hives collapsed in the same day,” he said.

A mite infestation — they feed on baby bees — was the culprit. And there are other pitfalls as well. Other pests can intrude and viruses can develop, but Garrison doesn’t want to treat his hives with fungicides or antibiotics, although one day he may make the switch, he said. “I’m always looking forward; how can I do a better job with my beekeeping?”

Happily, Garrison reported that the surviving hive at that location “is going bonkers. It’s rock and roll,” he said, adding that when a hive “swarms” that means that the bees are collectively feeling strong and looking to branch out: time to give them another hive.

“Think of it as a 12-year-old trying to run away from home,” Garrison explained. “They can’t support themselves, but it’s a natural thing where they want to find another home and leave the queen behind. So I’ll find the queen, split her off and make sure she has a lot of worker bees with her.”

A fat queen bee is a great sight for beekeepers.

“When beekeepers see a fat queen bee, we get really excited,” Garrison said. “That means things are going really well, and she’s walking around, strutting like she should; like a queen.”

Reading the language of the bees is a subtle — but important — part of the process, another great reason to have a pro that you can call on.

“Beekeepers don’t keep bees to get rich,” Wardynski said. “It’s quite the opposite. It’s a passion for the craft and personally for me as a chef, it’s about how it tastes. The upfront cost can be challenging, but the return with a good honey flow can make that back in an instant.”