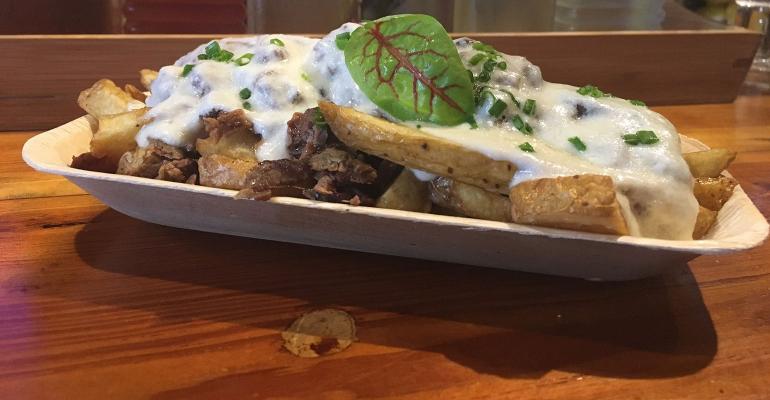 Brisket is the sweetheart of the barbecue world. Here’s how chefs are incorporating the tender beef into bold, best-selling menu items.

BRISKET POUTINE
Nils Richter, owner, Downtown Social House, Fort Myers, Fla.
Craft cocktail bar Downtown Social House aka SoHo, opened this summer with a brick-walled bar area and a patio with Florida charm, complete with a gumbo limbo tree and twinkly lights. Brisket poutine (pictured above) has been a best selling shareable plate in the opening weeks. The dressed-up French fry dish (sometimes called Disco Fries in some regions) is made with hand-cut potatoes and topped with aged cheddar and brisket that’s been smoked at sister restaurant The Lodge. There, pitmasters season big Angus briskets with a signature spice blend, then smoke it for 12 to 14 hours in a 700-pound, wood-assisted smoker until the meat is tender with a smoke ring, a status symbol for brisket everywhere. ARMADILLO EGGS
Jake Maynard, owner, the Mesquite Pit, Mineral Wells, Texas
The jalapeño popper’s Texan cousin, armadillo eggs are traditionally identified by the addition of sausage. At the Mesquite Pit, a family-friendly barbecue and burger spot with three locations west of Dallas, armadillo eggs are made instead with brisket, stuffed along with cheddar into jalapeño peppers and breaded with panko. “Being known for our mesquite smoked brisket, it was a natural product to start with,” says Jake Maynard, owner. Each week, the restaurant produces between 8,000 and 10,000 eggs, the best-selling appetizer. Since the eggs are so popular, a new menu item has just hatched: the Armadillo Egg Nest, a batch of armadillo eggs nestled inside an onion blossom. BRISKET DUMPLINGS
Matthew Register, chef/owner, Southern Smoke BBQ, Garland, N.C.
Southern Smoke BBQ respects North Carolina’s overwhelming preference for pig, but isn’t afraid to challenge and surprise their fanatical customers a bit with decidedly nontraditional food stylings from regions around the country and the world. Brisket dumplings can make use of leftover brisket. Brisket is mixed with panko, green onions, sesame oil and the restaurant’s own Sweet Grace barbecue sauce for the filling. The dumplings, soon to be a permanent menu item on the Southern Smoke BBQ food truck, are pan-fried and served with a dipping sauce of chile oil, honey and hot pepper flakes. FLEETWOOD MAC -N- CHEESE
Billy Morris, owner, Todd Chaisson, head chef, Smokin’ Rock N’ Roll, Cleveland
In their past lives, Billy Morris and Todd Chaisson were heavy metal rockstars. But the duo eventually started writing more recipes than songs, and started rolling with a barbecue food truck that can be found in the streets of Cleveland. Menu items that feature brisket include Judas Beef (brisket sliders) and brisket can be added to this dish, Fleetwood Mac -M- Cheese, a lunch option that absolutely rocks out. BRISKET CANNELLONI
Linda Harrell, executive chef/partner, Cibo e Beve, Atlanta
Cibo e Beve translates to “eat and drink” in Italian, and the focus is on both at this Atlanta eatery: craft cocktails, a wine list and lots of hearty-yet-modern, rustic-to-fancy with a touch of regional Southern flair. The Brisket Cannelloni is a great example of Italian countryside-meets-barbecue heaven. It’s made with fresh sheets of pasta rolled and stuffed with ricotta, Parmigiano and braised beef brisket. Then it’s baked till bubbly in a casserole dish with tomato sauce, béchamel and mozzarella. “I chose to do it with brisket because I love the flavor of braised brisket,” Harrell says.