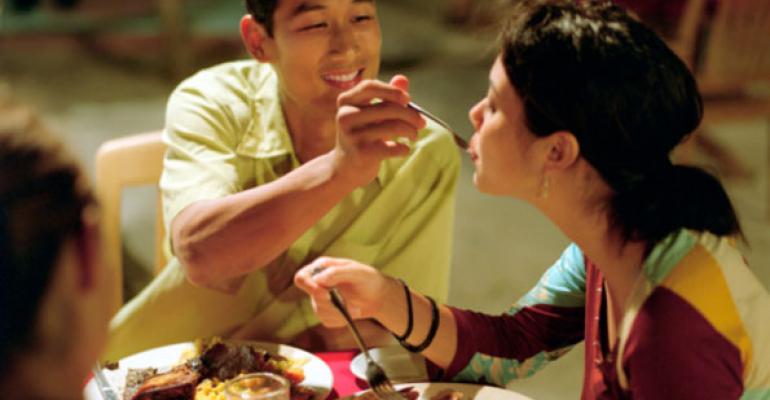 Food trucks still reign supreme as the best way undercapitalized culinarians can break into the restaurant ownership game. But a new study finds that another affordable alternative—the pop-up—might work just as well. What’s making this possible? A surge in the number of deep-pocketed customers who flock to pop-ups because they want a unique experience to go along with their meal.

We’ll get to the results of this research in a minute. But the key development here might simply be that a handful of restaurant industry service suppliers now see pop-ups as an addressable market segment that’s worth a closer look.

In this case, the survey was conducted by San Francisco-based Eventbrite, the Ticketmaster of smaller-scale events. The company quizzed more than 2,000 people who had eaten at a pop-up restaurant in the previous year. The findings: pop-up patrons are “experiential diners” for whom cost is not necessarily a factor and who eagerly share their dining experience on social media. They also embrace the practice of buying prepaid tickets when dining out—the sale of prepaid tickets being the business Eventbrite is in.

“The current generation of foodies views food as an experience, not just a meal, and is highly focused on the social and one-of-a-kind, ephemeral qualities that this new wave of events offers,” says Eventbrite’s Sarah Hoffman. “It's a win for guests who get to experience chefs at their most creative, but also for the industry; chefs and restaurants are able to build their brand and differentiate themselves through these pre-paid, ticketed experiences that help reduce food waste and deter no-shows.”

Real-world customers told Eventbrite that the top components that make eating at a pop-up a true experience include an out-of-the-box location (76 percent want this) and a surprising menu or theme. Three-quarters said they’re willing to pay more for the privilege of eating a pop-up meal. How much more? Half of respondents said they would pay, on average, $58 more for the same meal at a pop-up event that involves chef interaction than they would at a traditional restaurant.

These free-spending customers are eager to spread the word about their meal on social media, too. They told Eventbrite they are more likely to share their dining experience via social media for a pop-up than for a typical restaurant (75 percent versus 51 percent). Expect pictures, too. Sixty-two percent of survey respondents said they had posted images of their meals online in the past three months.

Another industry supplier, Intuit, parent company of small business accounting software company QuickBooks, wants to help aspiring chefs and restaurateurs get into the pop-up business, too. Check out the company’s information-packed infographic for helpful startup tips. Note that the bean-counters at QuickBooks say that for newcomers, “Pop-up restaurants are still cheaper on average than other options,” including food trucks and small brick-and-mortar operations.

If you were waiting for the barriers to restaurant ownership to go as low as they possibly could before you take your shot, it looks like your time has come. A well-executed pop-up now looks like a good way to jump-start the process. Get ideas for what could work >>