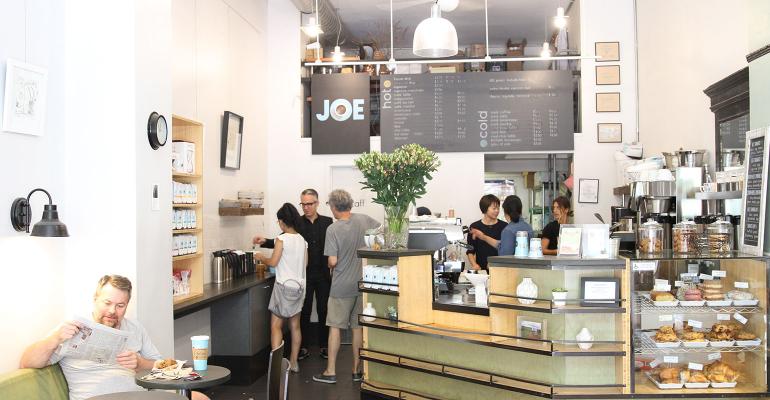 The first time Jonathan Rubinstein spotted Danny Meyer at Joe Coffee, his New York coffee shop, Rubinstein was so nervous that he couldn’t bring himself to talk to the famous chef.

“I remember being super star-struck,” Rubinstein said in an interview. “I was unable to introduce myself.”

Years later, Meyer has since become a big investor in Joe Coffee. On Monday, Meyer’s Union Square Hospitality Group announced its investment in the 14-unit chain of coffee bars. Terms of the investment were not disclosed.

The funds will help the chain grow — though Rubinstein, at least for now, is in no rush to look beyond New York City. City shopping is a long way from where Rubinstein was pre-coffee in 2002. In August that year, he left his job as a talent agent, deciding to do something “that was kind of opposite of a high pressure corporate job.”

The following January he settled on starting a coffee bar, then spent the next few months learning everything he could about coffee before the shop opened its doors that summer. “I learned it all from when we signed the lease to when we opened the doors,” said Rubinstein.

Joe Coffee has since evolved into a player in what is known as the “third wave” of coffee concepts seeking to bring higher quality coffee to the public. In addition to the coffee bars, the company has a roaster with a burgeoning wholesale venture, a catering business and an education component.

The company started roasting its own beans four years ago and started a wholesale venture a year and a half later, selling coffee to restaurants, hotels, cafes and grocery stores. Rubinstein believes that is a big opportunity for his company.

Joe Coffee also has an education component. The company views itself as a major advocate for coffee education. The company and its baristas have developed a curriculum to teach people how to make their own espresso beverages at home. The company held about 60 classes last year.

“It’s great for the brand for people to think of us as the coffee authority,” Rubinstein said.

The company also got into catering, almost by accident. After the Natural History Museum asked if the company could brew coffee for a meeting of 20 people, Joe Coffee developed a catering strategy.

The company will now offer pop-up coffee bars for meetings, fashion shows, weddings or other events for anywhere from 20 to 700 people. Last year, the company did 220 such events.

“It has become a big part of our business,” Rubinstein said. “There are days we have four or five events. It’s been sort of a sleeper hit.”

Rubinstein ultimately got to know Meyer when, in 2006, Meyer tapped Rubinstein to serve as a judge in Union Square’s first Barista Olympics. Joe Coffee has worked closely with Union Square, providing coffee for the café at the 9/11 Memorial Museum Pavilion and at Public Fare, the all-day cafes at Central Park’s Delacorte Theater and in Bryant Park.

“USHG has had a meaningful relationship with Joe Coffee and founder Jonathan Rubinstein for many years, both as avid fans of their coffee bars and also having served their coffee at Union Square events for years,” Meyer said in a statement. Ultimately, Rubinstein said, as Union Square started looking to make investments in “like minded companies,” Joe Coffee was given the opportunity to meet with Meyer and his group.

“We were almost jumping out of our seats,” Rubinstein said. “We were so excited about what we could do together.”

Meyer said in a statement, “We chose to make this investment with Joe Coffee because they are dedicated to the pursuit of making flawless coffee, are led by passionate and exceptional management, and share the same hospitality values as USHG.”

The company has funded its growth and expansion largely by relying on funds and investments from friends and family. The funding from Union Square will free the company from those constraints.

But the funding also provides Joe Coffee with access to Union Square’s experience and skills, especially on issues like real estate selection.

“They have a scientific way of looking at things,” Rubinstein said. “Instead of what I did when we moved to Philadelphia, with me jumping on a train, walking around all day and saying, ‘This is neat, let’s open here.’”

And though Rubinstein has had a relationship with Union Square and Meyer for years now, he remains awestruck at what his coffee bar has achieved since 2003.

“Who would have thought that some day he would choose to invest in us and be part of our world,” Rubinstein said. “It’s still unbelievable to me.”