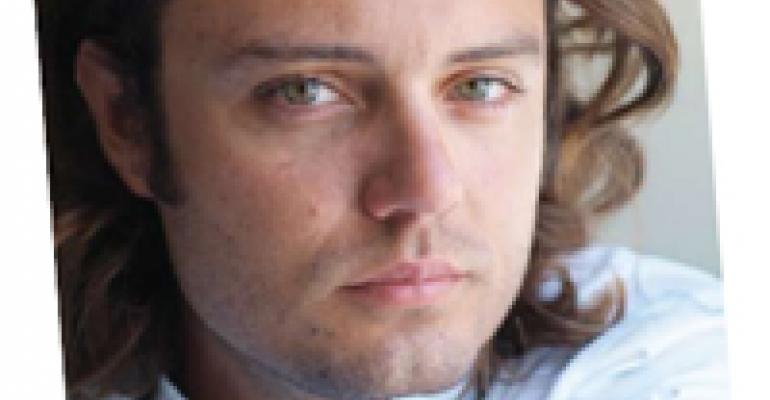 Chef David Myers, armed with one of the first Michelin Guide stars in Los Angeles and a superbly trained team, recently opened Comme Ça, a glamorous, modern brasserie, and Boule Atelier, a showcase of jewel-like sweets and soul-satisfying breads. These are the beginnings of a nationwide expansion by Myers, named Best New Chef in 2003 by Food & Wine. Noted for his flagship restaurant, Sona, which captured a Wine Spectator Grand Award in 2006, Myers has been called an “artist among artists” and was mentored by Charlie Trotter, Daniel Boulud and Joachim Splichal. In his office above Boule Atelier, Myers talked with RH contributor Libby Platus about team building, perfection and spontaneity.

Myers: The kitchen at Sona is so intense, so we joke and laugh a lot to break the intensity. Our team is a unit like you would never imagine. There are certain ways to motivate teams that are above and beyond. The end result is performance at the highest level.

RH: How is that achieved?

Myers: We do Navy Seal training, the model training program the Seals created to weed out for their BUDS (Basic Underwater Demolition Seals). In the winter, we have a full day. It starts at 4 a.m., swimming in the ice-cold ocean. Each person has a swim buddy and we're out there going through the Navy Seal hell week exercises. You get low-grade hypothermia while you are doing it. We have doctors there because it's a brutal experience. But, at the end of it, we're a team, ready to go to bat for each other. They learn about winning, leading, success. We do this with everyone, the front of the house included.

RH: Do many make the grade?

Myers: Some won't. For the most part, those who last the first six weeks, will. We never have to fire anybody; they just quit!

RH: What led you to this approach?

Myers: When I was developing Sona, I researched the best-performing teams in the world. Who were they? What were they doing? How did they become the best? Inevitably, what kept coming up was the military.

RH: Your team is so well-trained. Can they perform well without you?

Myers: I don't care what any chef says, there's no businessperson who does it themselves. How do you think Jack Welch at GE or Steve Jobs at Apple did it? Did they have to control every aspect? They have very talented people. It's no different in the restaurant business.

Myers: During my first year at Ohio State University, I continually missed exams because I spent all my time cooking at home. I got a job at one of the best restaurants in Columbus and was hooked immediately. Then, after 2½ years of experience, inspired by Charlie Trotter's first book, I went to Chicago. I knocked on the door and wasn't going to leave until I got a job. Luckily, I did! Charlie Trotter's was the first restaurant that really impacted me. I loved it. It was the toughest, most intense kitchen. The experience, mentally, was off the charts. It helped form my views and clarify my opinions on excellence and achievement. I learned how to lead, inspire, create, and how to be comfortable in the uncomfortable realm of change. He set up the connections for me to go to France and work at Chef Gerard Boyer's three-Michelin-starred Les Crayeres in Reims.

RH: You have incorporated the Japanese concept of “kappo” in your cooking. What is that?

Myers: When it comes to cooking, the Japanese are aesthetically and spiritually driven. “Kappo” is cooking in front of you with ingredients that are truly “of the moment,” right then and there, that one single fish that ran through the creek. The only two chefs I am aware of who do kappo in the United States are Masa in New York City and Urasawa, Masa's protégé, in Beverly Hills. Both are amazing.

I traveled throughout Japan experiencing seasons, at the most poetic moment, when things just sing. Our restaurants seek to combine this sense of spontaneity, peak and poetry of the season, with French technique.

RH: You are known to be a perfectionist, and yet, at the same time, you're very spontaneous. How do you combine such opposite traits?

Myers: By establishing a constant state of change. Change is never a nightmare at our restaurants because our team is used to it. If you come to Sona, you do not expect the same dish every time. People ask what's my signature dish and I say there's no signature. Our audience enjoys the thrill of the unknown. We never print our tasting menus and tasting is 65 percent of sales.

RH: Around the corner from Sona is your new Comme Ça. Why did you like this location?

Myers: We've had this lease for two years. We researched it and saw that the area was shifting to high-impact retail. We just lucked out. We're in the hottest spot in L.A. for high-end restaurants that can mirror the kind of experience these boutiques, like Marc Jacobs, are offering.

RH: How is Comme Ça different than Sona?

Myers: Sona is very much my personal cuisine. The menu at Comme Ça reflects traditional bistro cuisine and a French brasserie environment. The menu will not change like it does at Sona. There still is an emphasis on buying from artisanal farmers and perfect technique. The feeling is casual and relaxed. It is a breakfast, lunch and dinner operation, seven days a week. Sona is dinner only, five days a week.

RH: Are you planning more restaurants?

Myers: We will scale out Comme Ça. We're looking at possible locations for the next five years. Boule will open in Beverly Hills and expand nationwide. The former Boule location will be converted into another project. And we are planning Sokyo with Chef Kazunori Nozawa.

RH: A lot of people who are artistic have difficulty coordinating both business and artistic matters. Is this difficult for you?

Myers: I love business. There is a great quote from Jack Welch: “Control your destiny or someone else will.” If I only focus on the artistic side, somebody will focus on the money side and control my artistic side. I don't like that.

RH: What's this rumor about you surfing?

Myers: I bought a surfboard but didn't use it. I just worked. The busier I got, the more I needed balance for my health and sanity. Two years ago, I started surfing. I had many great lessons out there. It's really humbling and changed my life for the better. Now, we want to use the success of our restaurants, in a positive way. We're developing an initiative geared towards the ocean.