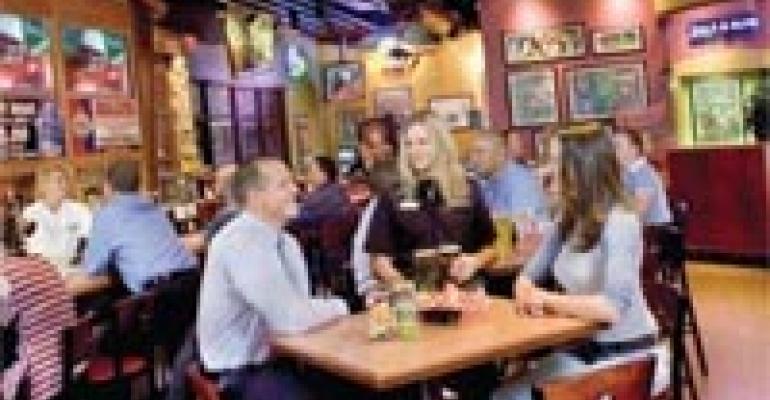 Certainly you don’t need to be told how tough it is out there in restaurant land. By many accounts, making ends meet hasn’t been this difficult in decades. In the wake of soaring oil prices and a government program to make ethanol from crops, the cost of basic ingredients—rice, eggs, flour, cheese—has gone through the roof. And the idea of raising prices for many is too freakin’ scary, so they’re pulling ingredients out of dishes, reducing portions, cutting staff. On the consumer side, this stagnant economy and soaring gasoline prices have your customers thinking twice about eating out. In a nutshell, this is not a great time to be a restaurant owner in America. In the past, when we’ve issued our list of the Top Ten Growth Chains, it was a list of juggernauts that were making money hand over fist. This year’s list—which features $100 million-plus growth companies—is a bit different. It reflects well-positioned restaurants that have handled the difficult economy better than the rest, says Bob Derrington, an equity research analyst from Morgan Keegan and Co. He helped us compile the list. Not so surprisingly, several of the concepts on our list have a cost-effective chicken focus. As in recent years, we’re also featuring our pick for the Chain of the Year. Turn to page 42 to see why Chipotle Mexican Grill is one of the few top players kicking ass and taking names. So, without further ado, here is our list of the top powerhouse chains in the land.

Based in Huntington Beach, CA, BJ’s is a brewpub concept that features Chicago-style deep-dish pizza. Its sales by the end of last year were at the $319 million mark, which is an increase of 32 percent over the previous year. Its unit growth was up 23 percent at the end of ’07, with a total of 69 stores. Most of that growth is taking place along the west coast. Its units average around $5 million in sales on the strength of its craft beers and diverse menu. In addition to its popular pizzas, BJ’s menu features a variety of appetizers, sandwiches, pastas and ribs. Checks average around $13.

This Baton Rouge chicken-centric concept just made our list with sales of $100 million at 66 units. It offers high-quality, never-frozen chicken fingers, crinkle-cut French fries and thick Texas toast, which are all made to order. With check averages of $8, Raising Cane’s is the right concept for the right time: in other words, inexpensive, better-quality fast food. Its average unit sales were $1.8 million on an average footprint of 2,500 square feet with 70 seats. “Chicken, compared to other proteins, is quite affordable, and it’s really popular with customers,” says Derrington. “That’s why the market is getting inundated with chicken concepts. But somewhere down the road there is going to be a shakeout.” Maybe so, but until then, Raising Cane’s is rolling along.

Talk about chicken concepts, here’s another, this one based in Richardson, TX. Founded in 1994 and featuring an avation-themed atmosphere, the so-called “wing experts” had 325 units at the end of last year with sales of $195 million. Unit counts were up a slight 1.5 percent, though sales grew by a whopping 26 percent. Most of this growth was fueled by franchising. Wingstop offers nine flavors of wings, which are made to order, and French fries are cut daily. Average unit sales are around $600,000, and stores seat up to 44 guests, which suggests the company has the attributes that more resemble a quick service restaurant than a fast-casual concept, though it serves wine and beer. Last month, Wingstop President and CEO James Flynn announced that the company posted its 20th consecutive quarter of comp store sales increases. It’s clearly doing something right.

Headquartered in Athens, GA, Zaxby’s is yet one more fast-casual chicken concept. Created by childhood pals Zach McLeroy and Tony Townley, this 409-unit concept features fried chicken wings and fingers, plus blackened breasts served in sandwiches. They are served with crinkle fries and Texas toast (sound familiar?). System-wide sales were $563 million at the end of last year, which represents a 21 percent increase over a year earlier. Average unit sales are about $1.5 million, which come from check averages of $9. An average unit has a footprint of 3,300 square feet and can seat up to 80 customers. The company is doing so well it has gotten into television advertising with spokesman Richard Thomas (John Boy from the Waltons), which has produced a noticeable bump in sales. “One thing to consider when looking at this concept and many others on this list is that they offer finger food,” says Derrington. “It’s popular with consumers and also reflects the low price points that many are looking for these days.”

Another pizza-centric restaurant, this one was born in Canada and now has headquarters in Dallas. The sports-bar concept has 280 units internationally, with only 52 units in this country. Nevertheless, its U.S. sales grew 31 percent in ’07 to $128 million (as opposed to system-wide sales of $728 million). Despite its name, Boston’s has a diverse 150-item menu, which also includes chicken wings, burgers, sandwiches and pastas. Units average $2.6 million in sales, with check averages of about $15. As you’ll see from the entire list of growth chains, a sports-bar theme is thriving in this weak economy because of the entertainment value it offers along with a high-quality menu and low price points.

One of two Mexican concepts on our list (not including our Chain of the Year, Chipotle), Qdoba demonstrated some remarkable top line sales and unit growth at the end of 2007. Its sales were in the area of $380 million, up around 43 percent over the previous year. It totaled 412 units last year, which represented 30 percent growth.

Like Chipotle, Qdoba offers a Mexican menu that is of much higher quality than you’ll find in quick service. Unlike Chipotle, however, its menu is considerably broader. Qdoba, with its $8 check average, is one of several fast-casual concepts on our list. Consumers are choosing fast-casual restaurants, says Derrington, simply because the price points are lower than that of casual restaurants, while the food quality is higher than that of quick service.

Brought to you by the folks who created Outback Grill, Tampa-based OSI Partners have created a seafood concept that complements their steakhouse. The “polished” casual concept features eight choices of market-fresh, creatively prepared wood-grilled seafood in a decidedly upscale setting. The fish can be topped with one of four sauces. The menu also features steaks and chops, plus chicken and pasta. At the end of ’07 Bonefish posted sales of $406 million, an increase of 24 percent over the previous year. Its unit count also registered an impressive 20 percent increase to 143 restaurants. Average unit sales are about $3.1 million, with average checks of $25 per person. Bonefish is one of the few national brands that specializes in seafood and is a clear step above the industry granddaddy, Red Lobster. The average unit is 6,200 square feet and seats 220. Despite its higher check average, Bonefish is doing quite well in a down economy.

Here we go again with another chicken concept, though this one is the Big Man on Campus. Formerly known as BW3 or Buffalo Wild Wings and Weck, this chicken wing concept posted system-wide sales of more than $1 billion at the end of last year. It did this on the strength of 493 restaurants with average sales of $2.2 million. In addition to chicken wings, Buffalo Wild Wings features chicken tenders, popcorn shrimp, wraps and sandwiches, ribs and burgers. Checks average $13. In addition to the ever-popular allure of chicken, a big draw of the 200-plus-seat concept is its sports-bar theme and its high-end audio-visual offerings. “You can’t underestimate the value entertainment brings to a concept,” says Derrington. “In this case, Buffalo Wild Wings has a lively, entertaining environment that people love. And the numbers prove it.”

This is the only deli concept on our list and it boasts of a 100-item menu that eschews fried or greasy foods. Last year, it racked up system-wide sales of $308 million, which was up 21 percent over the previous year. Its unit count was 248, most of that coming from its aggressive franchising program. Average sales per unit are $1.4 million. In addition to classic deli sandwiches, McAlister’s features a number of popular menu items, including its Spud Max, a giant baked potato filled with ham, turkey, bacon, cheddar cheese and more. It also offers a variety of items to cater to vegetarian appetites. Average checks are $7.75 at this Ridgeland, MS-based concept. McAlister’s proves that a cozy setting with rock-solid food will never go out of fashion.

The good news here is that this is no ordinary chicken concept. No, it’s a crazy chicken concept or, at least, that’s how it translates in Spanish. The real difference is that El Pollo Loco, which was born in Mexico in 1975, features marinated, flame-grilled chicken, rather than the fried chicken many of the others on this list offer. The grilled chicken comes with tortillas, rice, beans and other sides if one chooses to eat a burrito or taco. On the strength of its superior product, the 390-unit concept, headquartered in Mesa, CA, had system-wide sales of $618 million, which was up 17 percent over the previous year. Average unit sales are $1.6 million at restaurants that have a footprint of 2,500 square feet, seat 60 and have drive-thru windows. Checks average $9 at this exhibition-style concept with its wood-burning grills. If you’re going to do chicken, this is one way to separate yourself from the crowd.
TAGS: Trends Archive
Recommended Reading