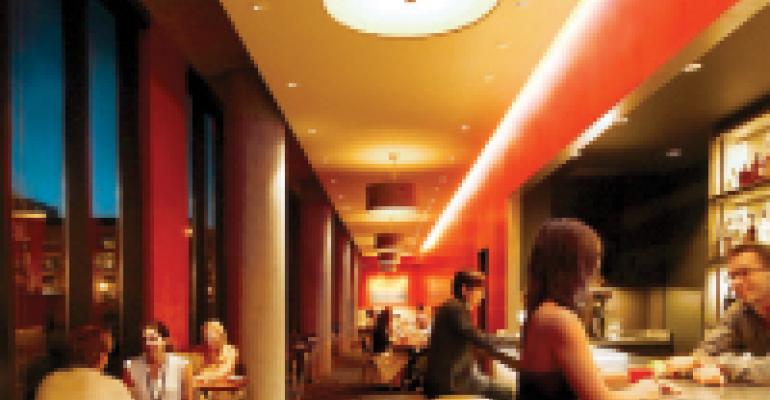 A growing number of operators are finding that less is more. Less space means lower labor, rent and development costs and, if they can balance the smaller number of seats with the overhead, more profit.

Consultant Aaron Allen, c.e.o. of Quantified Marketing Group, believes the proliferation of fast-casual restaurants has forced the square footage issue. Fast-casual operations are less complex than their full-service cousins and generally demand less space — and less money to develop. So, while a good sales to investment ratio rule of thumb has traditionally been 3 to 1, today that figure is closer to 2 to 1. “If you look at a smaller footprint, you're able to compress two out of the three biggest costs; you need fewer people to run it and the occupancy costs are lower,” Allen says. (Food is the third cost.)

Concurrently, in the last decade the ratio of sales per square foot has grown in weight. That's one reason many casual dining chains are seen as underperforming: On paper, they appear to be too big for their own good. At the same time, ironically, chains like P.F. Chang's with oversized spaces also are besting many of the concepts in the middle.

“The plates are moving so fast right now that the major restaurant chains are in the fault lines and don't know it,” Allen observes. “Either you need to get really small or you need to have a megabox — the middle ground is very dangerous right now.”

For many owners, low startup costs are the strongest argument for opening a small restaurant. “If there has been a restaurant in the space before, you have a nice opportunity to have a fairly low-cost entry into the business,” says Donald Lang, principal of DLA, which has designed spaces for a number of Boston restaurants. For a location like Boston, which has a lot of historic buildings, limited parking and a dense residential base, small sites are ideal locations for restaurants that will serve the neighborhood.

Lang didn't have the luxury of a preexisting restaurant space when he took on the job of designing Orinoco, a 30-seat, 867-square-foot project in Boston's South End. The site had been an antique store set in a five-story historic building with no wheelchair access. Because it was being converted to a restaurant, the architects had to work with the city on compromises to render it suitable for foodservice, including a hidden-from-view five-story ventilation system.

While Lang was able to cut through the red tape and construction challenges of converting the space into Orinoco, the effort and cost of attempting to take over a nonrestaurant space often can be deal breakers. Steve Jones, principal with SF Jones Architects in Marina del Rey, CA, agrees with Lang that taking over a small space already outfitted as a restaurant is more economical than trying to retrofit a space. He has seen a lot of sticker shock from would-be restaurateurs when they find out how much it will cost to install items like grease traps and air ducts. He recently worked on Anisette, a French bistro housed on the ground floor of an 11-story building in Santa Monica. “The space was extremely challenging because it was a historical building, and getting all the mechanical systems to work and the ducts through the space was extremely difficult.” In addition, California has strict rules about grease disposal; the restaurant had to figure out where to locate an underground grease interceptor “the size of a VW bus,” Jones says. “If you're lucky enough to have a big parking lot next to the restaurant, it's easy, but in an urban setting with underground parking, there are a lot more gymnastics to it.”

Changing a nonrestaurant space into a small eatery isn't just a construction project, it can be a permitting quagmire. “You have to be really careful if you're taking over a nonrestaurant space,” Lang advises. “In Massachusetts, if you're going to change the use of the space, all the building code requirements and possibly the zoning requirements change. You want to have a good attorney on board to make sure you will be allowed to have a restaurant.” There are other considerations; in his hometown, Newton, “if you don't have parking for your restaurant, you will not have a restaurant. It's like walking into a brick wall.”

Even if you're inheriting a former restaurant space, you will probably end up making some compromises. “Say a chef comes in and says ‘we need two more burners and a couple of fryers’; before you know it, you're moving things,” Jones says. “Moving anything six inches is a major deal. The hood has to cover the burners, so if you add burners you need to take down the hood and put up a new one.”

MAX FROM THE MIN

Restaurants, regardless of their size, demand certain basic elements: an eating area (assuming it's not a takeout-only operation) and sometimes a bar; areas for food storage, prep and cooking; and a reception area. The smaller the setting, the more critical it is to maximize sales per seat, so shoehorning as many tables in as allowable becomes a primary goal.

“A higher-end restaurant needs more space (between tables), but in a neighborhood restaurant, people don't mind being cozy with their neighbors,” Lang says.

Sometimes creating space means pushing outside the box — literally. Jean Baptiste Ducruet, principal of Atmosphere Design, converted a subterranean space in downtown Westport, CT, into a casual neighborhood eatery, Zest Café. Despite having to navigate through thick walls and design around a low ceiling, he created an award-winning space for owners Pietro and Janine Scotti.

But it wasn't easy. Fortunately, the landlord really wanted to attract a restaurant to the space, which is in the middle of a busy shopping district, so he had found someone to install a hood and ventilation system. He also agreed to allow the tenant to position a reception/waiting area at the top of the stairs to allow more square footage for patron seating in the main room. The lighting, flooring and air conditioning had to be configured to maintain at least 7.5 feet of vertical space, which meant installing uplighting on the perimeter of the room, painting the concrete floor instead of covering it with something that would add to its height and wrapping the HVAC ducts around the edges and disguising them behind a curved wall.

Spoonriver in Minneapolis took over a narrow, small space after some noodling around. The 11- by 102-foot space works because one side of the 60-seat room is lined with a banquette and the other is lined with large windows, which together give the illusion of a bigger room. To ensure good traffic flow, a 10-seat bar area features cantilevered, rather than moveable, stools. But, while the dramatic dining room is the star, planning began in the kitchen.

Paul Udris, a principal with U+B Architecture and Design, says projects like this one have taught him that “you always design from the back of the house out when you have a very tight space.” Before Spoonriver owner Brenda Langton signed the lease, the firm looked at the feasibility of moving into the space based on the chef's wish list for equipment. Even after the lease was signed and the equipment carefully selected, “Brenda wanted to switch to an oven three inches deeper than the one we chose, and we had to tell her we didn't have three inches,” says Edie Sebesta, an architectural designer with U+B. In fact, Spoonriver only became feasible when the property provided a small portion of the parking garage for the back of the house.

One of the issues some smaller operations have faced is where to store and sometimes prep food. Orinoco, for instance, ran out of food every day during its first month in business. So the owner negotiated for more refrigeration space in the building's basement and now relies on deliveries from a commissary set up at a second Orinoco location in another part of Boston for some prepared items.

Au Bon Pain has used the commissary system to supply a number of its downsized kiosk locations in Boston for a number of years; recently, the company opened a similar facility in Washington, DC. At 200 to 600 square feet, the smaller units don't have adequate space for storage or prep.

“So much of our stuff is made fresh every day,” says Ed Freschette, vice president of marketing for the Boston-based chain. “Where do you bake and prep fresh fruit, sandwich and salad materials? We need space to prep it somewhere and get it fresh to the cafes.” Deliveries are made twice a day, at 5 a.m. and just before the lunch rush. That can be adjusted depending on weather and other conditions that affect traffic to the restaurants. Baking is a logical function to be centralized, both from a logistical standpoint and for labor efficiencies. Skilled bakers are more expensive than the typical store employee.

Unfortunately, often owners don't discover the costs and barriers and realize how much space must be devoted to equipment, ductwork, providing adequate access for disabled guests and other issues until after they have signed a lease and already laid out some cash. “They find out these things when they're already pregnant, and there's no going back,” Jones says. “The kitchen keeps growing, the dining room gets smaller, the costs are ballooning, and they're saying ‘this thing doesn't pencil out anymore,’” he adds.

When it does pencil out, operating with fewer square feet offers a clear distinction: a sense of intimacy. Stephen Sicola, the chef/owner of Sicola's, a Culinary Experience, says having just 48 seats at his private dining space in Austin, TX, allows him and his staff to focus on the food and customize the guest experience more than a bigger place would permit. “You can make it as interactive as you want it to be — you can go out and speak with every customer to make sure they are happy. And you're able to work with detail, versus feeding the masses or having 100 people in the kitchen,” Sicola says. In his business, everybody pitches in. “If we cook, we all cook, do dishes and clean. It's almost like home when we come here.”

Ducruet agrees. “With more and more of the designs I do, the space is small because people can't afford large spaces anymore. But it's nice, because small sometimes is homey.”