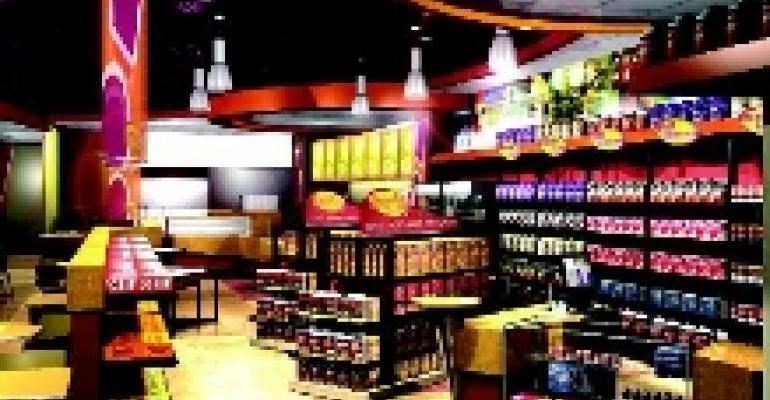 George Nadaff has a knack for spotting a trend and running with it. He launched a string of day care centers in the late 1960s, when women were entering the workforce in droves. He picked up on how those same working mothers rushed to pick up their kids, then rushed home to get dinner on the table. "So we tried a test, preparing food in the kitchen and having entrèes available for them," Nadaff recalls. It worked at a time when home meal replacement was only a glimmer. Fast forward two decades later, and he was astounded by the lines outside the original Boston Chicken location. A franchising veteran (by then he had already sold a company operating 19 KFC franchises; Mulberry Child Care Centers, which grew to 90 locations; and several other ventures), he masterminded the expansion of that one store into a small empire, which eventually was sold to Blockbuster Video and morphed into Boston Market. Nadaff walked away with a tidy little nest egg.

The most recent lines-out-the-door concept to capture Nadaff's fancy was Lo Fat Know Fat, a small fast casual cafè/nutrition store in Watertown, MA. Specializing in down-to-earth and healthful choices like chicken meatballs, wraps, salads, smoothies and lowfat fries, the place was packed with customers fresh from the gym or taking a lunch break from their office jobs. This, despite the fact that "it was a location that no real estate site selection person would ever pick— there was no parking, and it wasn't convenient," he recalls. About two-thirds of the business, divided equally between lunch and dinner, was takeout. The menu listed nutritional values for all the items, including carb and protein counts. Nadaff was intrigued. He also figured that, just as Boston Chicken fulfilled a demand for takeout home-style meals, KnowFat was poised to address a mounting demand for betterforyou restaurant food. "We don't say 'healthy,' because that means 'cardboard' in terms of taste," Nadaff explains. He prefers to call it "healthier."

He also liked the business model of teaming a healthy restaurant with a complementary retail component; the higher profits on the retail side, which only takes up about 20 percent of the space, help offset high operating costs on the foodservice side. And he believed that the package had broad appeal for an increasingly health-and weight-conscious public, not just gym denizens. Eventually he decided to buy the original store and the rights to the concept; cofounders Chris Pappas and Tim Kurtz, both former GNC execs, retained ownership of two additional stores, also in the Boston suburbs.

Deconstruction of a Brand
Once he took over the concept, Nadaff didn't waste time recruiting an executive team with brand-building experience. Eric Spitz (president and co-CEO) and Gary Jacobus (executive VP and chief marketing officer) joined him from Trakus, a sports technology company; Bill Fry (VP, training and food operations) joined the group after 12 years with YUM! Brands; Bob Nasella (VP, retail) had been a general manager and senior buyer of natural foods for a supermarket chain; and Tom Mackey (VP, field operations) had been president and COO of Lo Fat Know Fat.

The board of directors includes former and current executives from GNC, The Limited, Wild Harvest and other respected brands.

Spitz and Jacobus took a few months putting together a business plan for the concept. The next step involved hanging out at the three open locations to conduct surveys. They asked about the name, the menu, the design and other aspects of the business.

The menu was dissected from a number of perspectives. First, it got a onceover from Joan Buchbinder, a nutritionist who advises the New England Patriots. It also underwent engineering to provide the greatest variety of choices with the leanest number of ingredients. New cooking platforms were brought in to speed up production. To make sure guests didn't miss the fat that is trimmed from the traditional versions of dishes, menu items were pumped up with bold flavor profiles. Emphasizing sides like the fries, protein pilafs and steamed broccoli has have helped elevate check averages to $8.50 at lunch and $10 at dinner. Finally, food is served on china, not paper or plastic. Research showed that KnowFat!'s dinner guests choose the brand over other fast-casual options because they don't like eating dinner from plastic baskets.

A new prototype interior was created by Judd Brown Design. "We were looking for a unique design that said vibrant, fresh and healthy, but not overly healthy like a gym," Jacobus says. "When people walk in, they know this is different, not like anything they've been in." Stores will occupy 3,000 square feet—2,200 square feet for the restaurant and kitchen, the rest for retail. Construction costs are pegged at $450,000-$650,000. KnowFat! expects to lease sites ranging from existing strip centers, end caps and other former restaurant properties.

The name was a point of debate: "We're a restaurant center, a retail center, we're really what we call a better way to enjoy the foods you love, and we didn't want to say health in the name, we didn't want to go there," Jacobus says. Finally, an evolved version of the original name—now KnowFat! Lifestyle Grille—won. "It's built on knowing what you put in your body," Jacobus says. Store promotions play up that theme, using catch phrases like "did you know" or "in the know."

With Nadaff's history, raising money was not much of an issue: Early on, some 62 shareholders ponied up about $3 million to get the new venture going; management is in the middle of raising another $5-$10 million to finance expansion. "People are fascinated by this because it's not another restaurant," Nadaff explains.

All this tweaking is deliberate: Nadaff and his team are doing whatever they can to position KnowFat! to succeed on a national level. Their expectations are high: They want to have 600 outlets open by 2009, mainly through master license agreements.

"We want to get as many open as possible to dominate our home market, but outside Boston we're relying on area developers," Jacobus says. Local developers are better able to choose real estate and have the connections to get construction done faster."There are 5-10 people in various cities that are literally sitting there, about to do something with us." By the end of August, KnowFat! had area development agreements in Houston, San Francisco and Minneapolis that were expected to produce 16 additional locations.

Nadaff says would-be franchisees see the genius of the retail/foodservice business structure. "If you have 40 percent of your business on the retail side, and that delivers a 40 percent gross profit, that impacts the other side of the business. It drives the food and labor costs down, and people get that right away," he explains. He likes to talk about the "blended check average" for KnowFat! customers—their combined restaurant and retail purchases—which hovers around $14, well above the typical fast casual operation.

Because running a restaurant is a different animal than operating a retail store, managers undergo intensive training and get some aid from technology to help things go smoothly. "Most of the people we're talking to are restaurant operators who never operated retail," Jacobus says. "Our POS is designed to help them run the store." The system tracks sales, helps manage inventory and assists in promotions and new product launches on the retail side.

The Core Customer
The menu is designed to offer something for anyone trying to eat in a disciplined way: Symbols indicate vegetarian, lowcarb, high-protein and low-fat selections. Sandwiches and burgers are served on whole grain bread and buns. "Air fries," baked in an impingement oven, have been a signature item since the beginning. Substutitions are encouraged. And the receipt incorporates a nutritional analysis of the food consumed.

It's also intended to appeal across gender lines. Women stop in to grab a bite and shop for supplements; men are more likely to pick up dinner to go. Because each spends an average of 20 minutes, fast prep is a must: orderst ake three minutes to produce. KnowFat! management determined the ideal site for the concept is, not surprisingly, near a fitness center; other ideal locations sit near hospitals and colleges.

Much of the research for this well-thought-out brand focuses on the target market. "We are creating five to seven personas to describe the people who eat here," Jacobus explains. Those include fitness fanatics, soccer moms and others. Some know exactly what they're looking for, especially on the nutrition side of the business; others are more interested in what's on the menu or convenience. Creating the profiles "will allow us to have that one-to-one relationship where we're marketing and talking to customers in a language that resonates with them," he says.

Already, even though only four locations exist, there is a fierce loyalty within KnowFat!'s existing customer base. "We've got this cult-like following," Jacobus says. "People think, 'I've got this lifestyle, a commitment to this, and you guys are helping me.'" Nearly a year ago the company introduced the "In the Know" loyalty program, which allows guests to track their eating habits and get feedback from the staff nutritionist online. They also receive coupons for the nutrition center. Eventually, Jacobus says, data collected through the loyalty program "will be critical to our marketing efforts and ability to keep our guests enthused."

Loyal customers aside, perhaps the biggest hurdle in attracting new guests are preconceived notions about what constitutes healthy food. One way Know-Fat! is overcoming apprehension is by setting up tables at health clubs, corporate health fares, athletic events and other locations, where staffers hand out samples and coupons.

The ultimate goal may be to go public, but Nadaff says he wouldn't be surprised if one of the franchising giants buys out KnowFat! before it has a chance to float an initial public offering. "The large food chains out there that are buying the Chipotles of the world like concepts that get established early on and go in and make you an offer you can't refuse," he says.