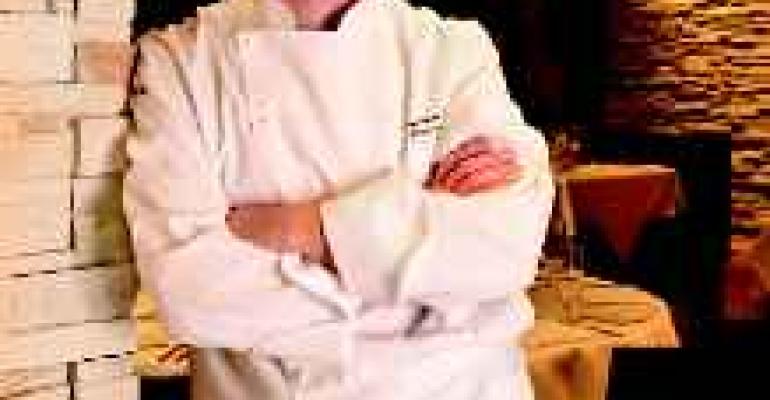 From Farm to Table

Jonathan Bennett runs the show at Moxie, one of Cleveland's hottest restaurants. Hired as a sous chef when the stylish American bistro opened in 1997, by 2001 the CIA grad had stepped into his current shoes as executive chef and co-owner of Moxie, named last fall by Gourmet as one of the best places to dine in the U.S. Since then, his duties have expanded to include two new ventures for him and his Praxis Restaurant Group partners: the traditional Mom's Diner and Red, Cleveland's first contemporary steakhouse.

Bennett, 31, is best known for his uncompromising attitude toward food: The Moxie crew butchers meat, cooks stocks, prepares rice dishes and finishes soups a la minute, mixes crème fraîche and rolls out puff pastry from scratch; at Mom's, mashed potatoes made twice a day and Angus beef burgers are typical of the "good, honest food" on the menu, Bennett says.

RH's Megan Rowe recently asked Bennett to explain his philosophies about food and the business.

Was food important at home when you were young?
Sort of—I was raised on a hog farm in Ellerbe, NC with 2,500 pigs. We had around 400 acres and leased out some of that to other farmers, so there was always something you could pick: eggplant, tomatoes, beans, squash, watermelon. Growing up on a farm is something nobody can explain unless they've done it: Pigs eat three times a day and you never take a vacation. Working 60-hour weeks in a restaurant doesn't compare.

When did you first start thinking about becoming a chef, and how did you get there?
My mother did the cooking. She also owned a hair salon; sometimes she and my father were both busy, so I would help out by cooking. When I was 8 or 9, my mother took me to a Japanese steakhouse for the first time. I was so impressed by the experience that she bought me an electric wok. I would imitate the hibachi chef and make tableside stir-fry for the family.

My mom did one of the local chef's hair and helped get me a job at an inn nearby when I was 13; I made it to the line at 14, and as soon as I had a car, that was my job. It was a lot more glamorous than cleaning pig stalls. Then I got a job at a country club, where I decided this was my lot in life, and ended up attending the Culinary Institute of America. After that, I returned to North Carolina to take care of my father, who was ill, and got a job at Pinehurst. I worked at Classics in Cleveland, and the Homestead, helped open Plaza 600 in Cincinnati, then my wife and I lived out of the back of a pickup truck and traveled around the country for three months. We worked at a bakery for a few months, then I ended up at Moxie.

Which of your mother's recipes was your favorite?
Beans with ham hocks and cornbread. We'd eat it for lunch every Thanksgiving after rabbit hunting in the morning.

Did you ever experiment with a dish and surprise yourself?
I'm always trying to find ways to apply cooking for 5 or 15 into cooking for a Saturday night of 415 (a busy night at Moxie). For example, cooking rice pilaf a la minute instead of cooking a large quantity and holding it is something that I was surprised to find we could pull off. Taking the proper way to do something and applying it to a busy restaurant setting is always fun and surprising.

What's your strongest professional suit?
Not compromising at any level, and keeping old world techniques alive. We make our own sausages, cure our salmon, make fresh cheeses and crème fraîche—those things we can make better than what we can buy. We're lucky to have the facilities and staff to be able to do it.

Is there an ingredient you find indispensable?
Salt. We can't survive without it, and nothing would taste good without it. Everything else is a flavor; salt is a flavor enhancer.

What are your pet peeves at work?
Not showing the proper respect for the food God gave us to work with—going out to have a cigarette when you have onions caramelizing on the stove, or forgetting about a piece of salmon in the oven. An animal died to give you that piece of salmon.

What would you be if you weren't a chef?
I would probably be an architect. I think the two jobs are very related—architects may not be the actual builders, but they designed the building and told people how it would work. It's the same here: Customers always ask "did you cook my meal?" What I do is design the plate and provide the recipes, and someone else builds it.

Where do you get your ideas and inspiration?
I could be driving in the country and pass an apple orchard, or go to a farmer's market and see what's in season. Summer is easier; in the winter, I have to look at an almanac to remember what's available. I also keep an eye on recipes in magazines.

What kind of meal do you enjoy in someone else's place?
I tend to order the funkiest thing on the menu. We've all had the steak and potato lover's dinner. I want to see what they do with the carpaccio.

Favorite junk food?
Kettle-cooked potato chips (I only eat them off my kids' plates) washed down with Mountain Dew.

After those long hours, how do you blow off steam?
I like to watch movies. For seven bucks you can forget about life for two hours.