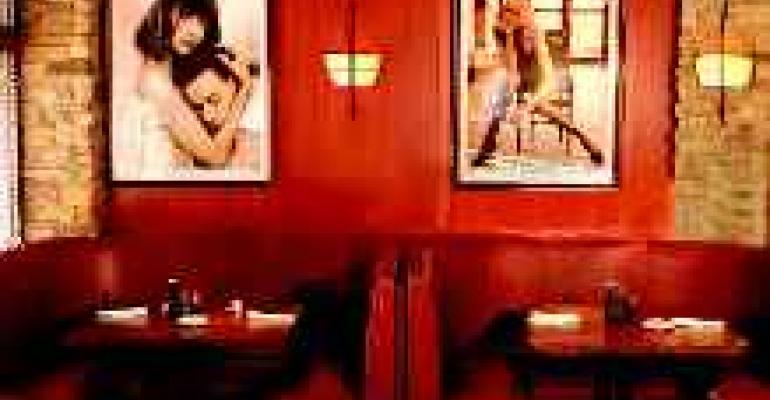 Judging by the menu, Red Star Tavern seems to be aiming straight for the stomachs of nostalgia fans. The graphics smack of the whit-bread 1950s, and selections—including fried shrimp with fries and cocktail sauce, pot roast with mashed potatoes, chopped angus sirloin with mushroom sauce, caramel apple bread pudding—promise the comfort fare moms dished up in premicrowave times. But turn to the back page drinks menu, with more than 25 custom cocktails—heavy on the 'tinis—alongside a deep list of beers, microbrews and a selective wine list, and suddenly Red Star Tavern takes on a very today vibe.

The combination is intended to have broad appeal, from young singles to busy families and empty nesters. The formula works. Ever since the first location opened in Deerfield, IL, three years ago, "it's become a neighborhood sort of spot," says Roger Greenfield, one of parent company RDGChicago's two principals and cofounders. "It morphs during the night: It's families with kids from 5:00 to 7:00, then at 7:00 you've got singles and couples coming in. A lot of the locations have a late-night menu, and that's when industry people—bartenders, waiters and cooks from other restaurants—come in. They need their cocktail hour, too."

Speaking of cocktails, the expansive bars at Red Star Tavern have developed a following as well, accounting for an average of 40 percent of each location's sales. Customers drop in for drinks and stay for a bite to eat while they watch a game on one of the bigscreen plasma TVs.

RDG, which also brought us Bar Louie (also an RH Concept of Tomorrow), apparently has another winner on its hands.

The development of Red Star Tavern happened organically. "We found this second-generation space in Deerfield, a suburb between where my partner and I live, and we sat down and put together all our favorite foods that we would like to see on a menu at a place where we could eat two or three times a week,"

Greenfield recalls. "We came up with comfort foods and other items that were favorites of us both. Then we fit out the restaurant with sort of a comfortable, lodgy feel."

Greenfield, dreamed up the interior for Red Star just as he has masterminded the design for all of RDG's restaurants. The typical 7,000-square foot Red Star Tavern incorporates 200 dining room seats, a 100-seat bar, a 70-seat private dining room and a patio that can accommodate up to 100 guests. Design elements include an open kitchen, fireplace, curved leather booths, wood-paneled walls with flagstone detail, custom lighting, eclectic artwork and plasma televisions. Glass separates the open kitchen from the dining room "so you can see it but not hear it," Greenfield says.

One way Red Star has stayed on top of the game during its three-year history is constant menu tweaking. The process is simple: "We are always looking at our numbers and seeing what's selling and not selling, and we try to replace the ones not selling with something that sells," Greenfield explains. But, predictably, some patrons always object if a slow mover gets yanked from the menu. "If something stays on the menu, it has to be something people love," he adds.

With chains like Houston's and Champs representing the most direct competition, the much smaller Red Star must rely on creative methods to keep in the public eye. New stores at lifestyle centers piggyback on the centers' broader marketing efforts, for instance. The beauty of operating in that kind of environment is that impatient diners who can't wait for a table at another restaurant often check around to see which restaurants don't have waits. Managers also work with local concierges and target businesses for corporate events bookings.

As Red Star expands, getting new staffs up to speed is less of a challenge than one might expect, thanks to an intensive train-the-trainer program. "A lot of times our managers and chefs have worked in one of the other Red Stars before they open, so they're totally familiar with the concept and the menu," Greenfield says. "They work for about a month at one of the other stores, where they live and breathe the concept." He thinks that exposure is critical.

While several Red Star Taverns have opened in center cities (Chicago, Columbus, Louisville), RDG has decided the future for the concept lies in the growing ranks of lifestyle centers and other suburban locations.

RDG CHICAGO IS FOLLOWING A FAMILIAR FORMULA TO FINANCE the expansion of Red Star Tavern: As with its other concepts—which include Bar Louie, Nick & Tony's and Bluepoint—growth is fueled by cash flow from the company's 50-plus portfolio.

To make sure that cash flow is healthy, RDG keeps close tabs on all its restaurants and nips problems in the bud. "Every day we try to look at the P&Ls and see if any restaurant is out of line," says Ted Kasemir, co-principal with Greenberg. Red-flagged restaurants get visited by a culinary team or a front-of-house team of veterans from the home office. "Theses guys are the firemen who go in and put out the fires," Kasemir says. Speed is critical, he argues.

"You have to keep on top of things," Kasemir says. "This is a business of pennies."