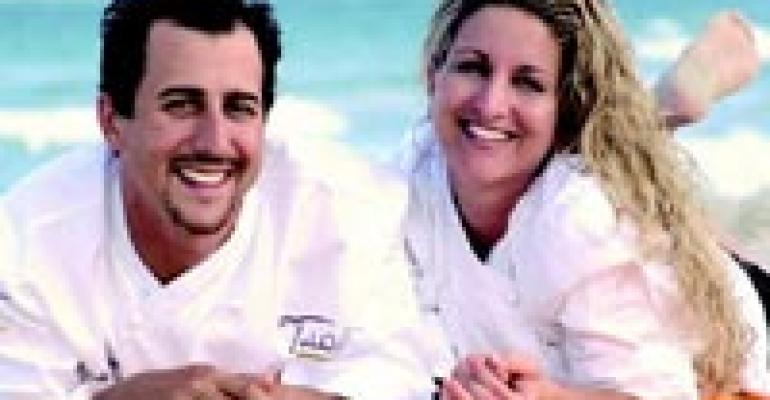 After winning separate kudos, Andrea Curto and Frank Randazzo decided to form their own professional husband-and-wife team. Both veterans of Tribeca Grill in New York and Pacific Heights in Coral Gables, Andrea most recently drew raves as executive chef at Wish and Frank won praise for his work at the Gaucho Room, an innovative steakhouse at the Loews Hotel, both in Miami Beach. Last year, the new South Florida power couple decided it was time to do their own thing. Six months after opening, Talula Restaurant and Bar had already won nods from the New York Times and Bon Appetit as a happening place. RH Features Editor Megan Rowe talked with them about food and how they really eat.

How did you get into the restaurant business—and why do you stay?
AR: After a couple of years at regular college, I figured out that's not what I wanted to do, so I came home to find myself and got a job as a waitress—I always loved to cook, I was constantly experimenting and doing things in the kitchen. Once I started waiting tables, I begged someone to give me a job in a kitchen, because I wanted to go to the CIA and knew I needed some experience. I don't want to say we're gluttons for punishment, but something about this business draws you to it. When it's tough, it's grueling, but when it's great, it's awesome, and there's a certain energy about cooking for people and having them enjoy your food.

FR: I was young, I needed a job, and I got one as a busboy in a restaurant in New York. It was easy for me to stay—I absolutely am this business. As far as what I wanted to do, this is it.

What culinary figures have had the most influence on you?
AR: In culinary school, we watched a film about Alice Waters, and I was really intrigued by her and what she accomplished and all those beautiful fresh ingredients and produce available to her. Someone I definitely respect is Charlie Palmer—someone who started from nothing and built his empire. The person who had the biggest impact on my cooking would be my grandmother. I always use my grandmother's recipes. I use a little bit of her all over the place. I'm saving her true recipes for when we open our little Italian restaurant someday.

FR: Charlie Palmer is a good chef who is an inspiration—a guy who got into the business, worked his way up, was smart enough to open a business and succeed at it and now has his multimillion-dollar restaurant group. That's my goal. Not only to have a great reputation in the kitchen, but to be able to balance the rest of the business.

What would you have as a last meal?
FR: It definitely would be a lot of the food I grew up with—antipasto such as fresh mozzarella, roasted peppers, prosciutto and stuffed peppers, followed by my grandmother's or mother's gnocchi, served with red wine.

AR: For me, it's the full Italian Sunday dinner: start out with antipasto, lasagne, pork, salad, nuts, fruits, tiramisu. We do that less and less, but we try to make meatballs or pork sauce on our days off.

How do you entertain?
FR: If we're doing something casual, we'll grill fresh fish, chicken and ribs. On our days off we don't want to go all out. We marinate things so when we do cook out, it's set up ahead of time, and it's easy to clean up.

AR: We have a couple of friends who are always wanting to learn new things, so we have a cooking class. We ask them what they want to make.

What's your favorite junk food?
AR: I love cheese doodles and those miniature Reese's peanut butter cups in the freezer. I don't know if I should admit this, but I can't buy the cheese in a jar that you heat up to serve with tortilla chips because I will eat the whole jar. Also those little chocolate sugar wafer cookies.

FR: Milk and cookies, especially Oreos, and potato chips. Any time I come up with a sandwich, I have to put potato chips on it.

What one ingredient can you not live without?
FR: One is red chili oil. I generally use a mild to medium red chili oil to garnish, marinade or finish anything from dressings to plates and sauces. It's a multipurpose thing. Not everyone uses it because they fear the chili. It helps give our dishes more dimension. Instead of using the same ingredients, you cut in some red chili oil and it builds a complexity and flavors so that you have these different things going on in your palate. I also like fresh lemon or lime zest; it gives a special freshness or lift to almost anything.

What's the most important business lesson you've learned?
AR: Now that I have a family (including twoyearold Isabella), I try to manage my time better and delegate a little. As chefs and business owners, we tend to submerge ourselves in our restaurants and work and think we can do it all ourselves. Now that I have people who depend on me, I realize there are people who can take care of things.

FR: That it's hard to meet people who are genuine.

How do you manage working together?
AR: When it's great, it's awesome, because we complement each other in many ways. But when it's horrible, it's horrible! But at the end of the day, we're friends again—we work hard on communicating. That's the thing that makes it go. We address our issues before they blow up and get out of hand.

How do you relax?
AR: I don't. I've tried, and it's really hard—my husband yells at me about it. He's really good at taking naps; I don't know how. I have a very hard time relaxing until I just crash. I do like to play tennis, but I don't know if it's relaxing—I like something where I can run around and smack the ball around and let out a little aggression.

FR: Play golf, swim with my daughter, drink a little.

If you weren't a chef, what would you be?
AR: Probably something in the music field, because I'm a big music lover, I played in some bands and did theatre.

FR: I always wanted to be involved in some sort of criminal law like the CIA or FBI. Most of my friends joined the New York City police force, but I was interested in seeing the world.