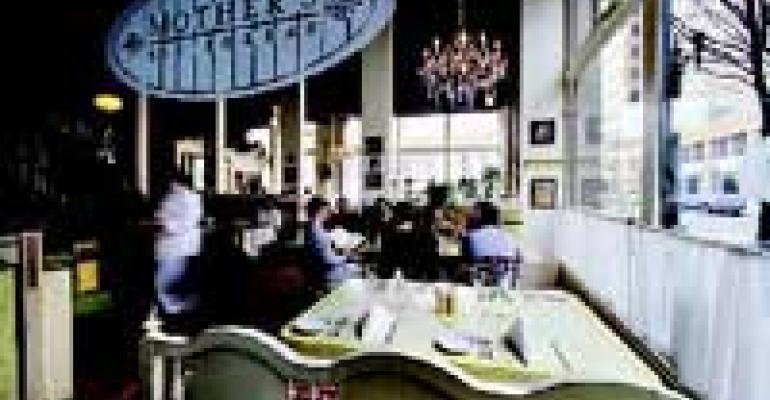 " You should eat so good," proclaims the sign outside Lisa Schroeder's restaurant, where she feeds both body and soul.

"Is that pot roast?" you may ask, sniffing as you enter the dining room of Mother's Bistro and Bar in Portland, OR. It sure is. From the doorway of the comfortable bistro, you might also pick up the essence of macaroni and cheese or chicken and dumplings, which, by the way, Lisa Schroeder has been slaving over all day. Sounds just like what home should be, doesn't it? That's the whole point, says entrepreneur Schroeder. It is exactly like mom's—at least someone's mom's—because the Mother's Bistro menu comes not from focus groups or from following the latest trends, but from the real moms the restaurateur seeks out, cooks with and honors at her business every day.

Like all great inventions, Lisa Schroeder's idea was born of necessity (at least, as she defined necessity). Back in 1992, the single mom was trying to do right by her young daughter, Stephanie, and on all fronts, succeeding. Well, she confesses, almost all fronts. To make ends meet, Schroeder had to put in 13-hour work days as a marketing manager with Weight Watchers and as owner of her own little catering company in New York. So for the then-35-year-old mom, making nourishing, soul-satisfying, home-cooked meals—like the ones her own mom lovingly prepared back in Philadelphia-was a rarity. To Schroeder, that was distressing. After all, those stews, roasts and braised dishes not only fed the body, but made a family feel loved, and for Schroeder, preparing these meals was the calling card of the "good Jewish mother."

"What I need," Schroeder used to muse, driving home from work and weighing her takeout options, "is a restaurant that can give us that food."

And she couldn't be the only one who wished for such a restaurant, she decided, as she dreamed of opening such a place herself. "I knew it would appeal to almost every age group. Older people would love it because it's the food of their past. Younger people would eat it out of chicken nugget backlash. It's what they wish their parents would have made them. And if it's really good food, in a somewhat hip, and not-too-grandmotherly environment, I knew it would be universally loved."

Comfort Food Rules
So love is what she's dishing out today, in the form of hearty helpings of "mother foods" like chicken paprikash and meatloaf. "Obviously there is such a need for a place that serves this food, because mothers aren't making the stuff at home, and we're losing those authentic dishes of our collective past," Schroeder laments. Her offerings at Mother's Bistro are straightforward, with an emphasis on flavor and no distractions. "So many restaurants offer frou-frou comfort food, because the chefs don't feel comfortable just offering pot roast," she says. Laughing, she adds, "So they do things like crust it with shiitakes or something. They feel like they have to make it their own."

Schroeder's cooking may not be haute cuisine, but this culinary school grad isn't exactly slinging hash, either. "I wanted it to be mother food taken to a higher level," Schroeder explains. To that end, her strategy is to take real moms' recipes and apply-her classical training to make them best they can be—to fuse everything she gleaned in her formal training with "real" home-cooking.

For example, she cooks a veal stock overnight, then uses it for meatloaf and pot roast. Another example is the Chicken Fricassee adapted from the recipe of James Beard's mother. (Schroeder honored Mrs. Beard's cooking at a James Beard House event in 2001.) But instead of simply boiling the ingredients, as had Mama Beard, Schroeder sought a more flavorful preparation, browning the chicken and sautÈing the leeks, celery and carrots in chicken stock. "It's still a chicken fricassee, but with more complex flavors," explains Schroeder. "It's 10 times more intense."

Similarly, Schroeder adjusted the stuffed artichoke recipe of one of her recent "Moms of the Month," the real-life moms whose recipes she features as monthly specials. "I wanted to honor her, but I also wanted to make it better," she says. "So I used very good cheese, Parmigiano Reggiano and Pecorino Romano, and I tripled the amount originally called for in the recipe. I also cut down on the bread crumbs and added more garlic, parsley and olive oil." But is it still "mother food" if you change the moms' recipes? "I'm not turning the recipes into something they're not," she says. "Also, it's my reputation at stake as well as hers, so the bottom line is I have to do what I think will please my customers.

"I'm faced with this dilemma every month," Schroeder confesses, "But sometimes I have to adapt them with my training, or we'd be a diner."

A Restaurant Is Born

Shortly after the idea for the "mother restaurant" began percolating in her brain, Schroeder's life fell apart. Laid off from her job at Weight Watchers, Schroeder suffered not only unemployment that year, but also a broken leg and a broken heart. Her second marriage came to an end when she discovered her husband was carrying on with a dear friend. And the worst part: Her daughter decided she'd like to try living with her dad, Schroeder's first husband. But instead of indulging in self-pity, Schroeder, who is as much tough mama as she is doting mom and grandma, decided to view the awful events as "the deconstruction before the reconstruction" of her life. She saw it was time to take that "mother food" restaurant dream and make it a reality.

"I could cook, so everybody told me to 'just do it.' But I didn't want to go into this if I couldn't be a success," she recalls. So Schroeder decided to really learn how to cook, and where better, she reasoned, than the Culinary Institute of America in Hyde Park, NY? More than teaching her cooking skills, she also knew a formal education would be essential to help her run a kitchen and a restaurant. Moreover, it would provide her with the connections she would need later. So, sustained only by her unemployment benefits, Schroeder enrolled at the CIA. While there and after graduation, she aggressively went after positions in top restaurants both here and abroad like Lespinasse and Le Cirque.

A spiritual person, Schroeder now believes the devastating events of her life were a blessing in disguise. "Growing up a Jewish girl in Philadelphia, I was told I could be a doctor or a lawyer, but a career in food was never something that was introduced to me. Visiting the CIA opened my eyes and allowed me to see it as a real profession. And once I saw the light, nothing was stopping me," she excitedly recalls.

In 2000, Schroeder was finally ready to launch her restaurant. She believes it was another act of fate that made it possible. A few years earlier, Schroeder met Rob Sample when he was in New York City on business. That meeting was the start of a long-distance romance. Eventually, Schroeder decided that in Sample's home of Portland, she could make a new start, both personally and professionally. Making the leap easier and more meaningful, daughter Stephanie (now Stephanie Cohen, 25 and a mom herself) joined Schroeder on the West Coast to help out.

Wanting to avoid the hassles that come along with investors and partners, Schroeder started looking for loans, which were impossible to obtain. Eventually she found an organization for women entrepreneurs that agreed to lend her $150,000 if she could come up with $50,000 of her own. Still, that would be tough, but Sample enthusiastically offered her the money. She accepted.

Next, she found the perfect spot on a busy downtown corner in a great neighborhood with lots of foot traffic. But there was a problem: bad mojo. The four restaurants that previously occupied the space all had gone belly-up, and this bothered Schroeder.

Her two-pronged approach to avoiding the same bad fortune reveals the dichotomy of Schroeder's personality. First, this savvy and methodical businessperson interviewed "everyone that wasn't dead" connected to the failed restaurants to find out what went wrong. "I learned it wasn't because of the location, but because of the people who owned the establishments or worked in them. They were doing it to make a quick buck or support their coke habit," says the refreshingly frank Schroeder. "The restaurants were like the chains. They weren't chefdriven. They were soulless. It wasn't about the love for them. It was just business. I've never had money, so it wasn't about that for me. For me, it was about making this dream come true."

Second, proving that she's as much new-age baby boomer as she is smart entrepreneur, Schroeder took steps to make sure the restaurant was spiritually fit for success. "I took the right precautions," she says, bringing in a feng shui master and scheduling a traditional native American smudging for good fortune.

But the most important part of her business plan came shortly before opening her doors. Trying to think of a way to incorporate both specials and seasonality into her menu, she had an epiphany in the form of the Mom of the Month idea. What better way to accomplish both goals than to bring a real mom and her recipes into her kitchen for a day of collaboration and cooking, with the mom showing Schroeder the recipes, and Schroeder sometimes showing the mom, as mentioned earlier, how to make them even better? In warm weather months, Schroeder looks for moms who cook Mediterranean or Latin. In colder months, she finds moms with heartier Russian or German recipes.

It was one of those moments of enlightenment, says Schroeder, who remembers thinking, "There are a lot of other restaurants around the country called 'Mother's,' but none of them are doing this." A bonus: The idea was sure to encourage repeat business.

Most importantly, Schroeder says, "The idea let me truly honor real mothers, which I was absolutely fixated on." Indeed, her M.O.M. menus contain not only a list of offerings, but a short biography of the designated mom, lovingly written by Schroeder herself. Each is a sentimental experience for Schroeder, whose own mother, a one-time restaurant owner, died when Schroeder was just 21. "You should see how rewarding this experience is for some families. One woman came to me and said that her mom had died, but she'd come and help me put together a menu of her mom's recipes. The whole family came the first night, and not just from Oregon, but from Colorado and California. I'm affecting peoples' lives with this. It's magical. I'm so rewarded emotionally. I'm doing good and serving good food."

And in her heart, Schroeder knows the restaurant is also a love letter to the two most important moms in her life — her own, whose absence makes her success somewhat bittersweet—and her husband's grandmother, whom she never met.

"Rob's family still loves to talk about his grandmother's Sicilian meals. I think about doing this to honor her. It was her grandson who lent me the money to do this, and so I'm grateful to her."