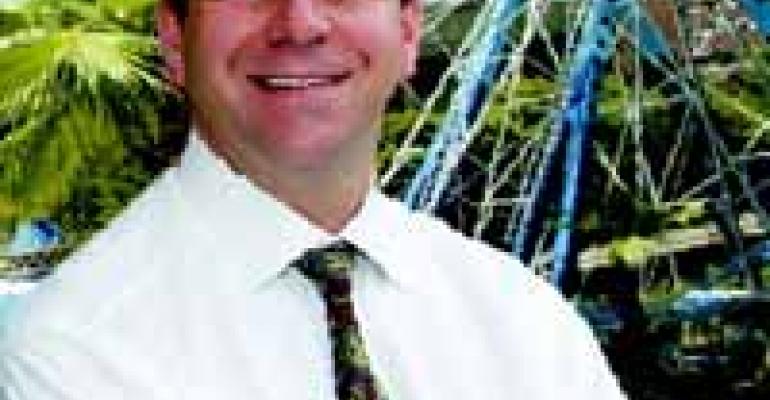 Everything about Houston-based Landry's Restaurants is as big as the lone-star state it calls home: big concepts, big promotions, big sales, big growth-all navigated by a big-living showman of a CEO. Just trying to keep up with the company's aggressive acquisitions and development plans makes one's head spin, from flashy "eatertaiment" projects like the Downtown Aquarium in Houston-replete with a 90-foot ferris wheel and a kiddie train that chugs through a tunnel filled with sharks—to a hotel division with 1,000 rooms under ownership or development.

Heady figures for a company that started in 1980 as a single seaside restaurant in Katy, TX.

The captain of this ship, 47-year-old Tilman Fertitta, is credited with steering a multiconcept foodservice company through the turbulent waters of the last few years, snapping up valuable waterfront sites and preferring to acquire existing companies rather than start up new concepts. He owns more than 21 percent of Landry's. Called the Donald Trump of the restaurant industry, Fertitta has amassed his fortune through a combination of savvy deals and brash risks.

Fertitta bought Landry's in 1986, after stints as a vitamin salesman, video arcade operator and finally, owner of a construction and development company that built residential housing, restaurants and hotels. The company went public in 1993, with Fertitta as its sole owner. Since then, Landry's has grown in large part by buying mismanaged and undervalued restaurants.

Fertitta has his critics, namely for some of the flashier projects (Texas preservationists have condemned the Landry's hugely commercial entertainment complexes, grousing that they destroy small-town character) but he brushes off the derision. "Hey, we just added a phase to the Boardwalk (Houston) because it's doing so well," he counters.

"We'll top 1.2 billion this year," boasts Fertitta, with his characteristic bravura. "Everything's going great. We blew out the numbers the first quarter, and we had a big second quarter. All the acquisitions have been integrated, and we're doing extremely well."

It looks like smooth sailing at Landry's for now. "Joe's (Crab Shack) is doing well, as is the Saltgrass (Steak House) concept," says Fertitta. "We're renovating all the Chart Houses and putting in new menus. Our Rainforest (CafÈ) continues to have great numbers. Everything is on the right track, so we're just enjoying the ride."

The only sluggish performer in the group, if it can even be called sluggish, is the company's Crab House concept. "It's just sitting there and it's got flat comps, but it's an older concept and we're ready to start redoing some of them," says Fertitta. "And yet they still average almost $4 million. We feel that as we renovate them, they'll do well."

This year, Landry's plans to roll out 20 more stores among the Saltgrass Steak House, Joe's Crab Shack, Aquarium and Rainforest brands. It also will develop more of its signature group of upscale, independentstyle restaurants. Included in recent launches are mostly Houston-based restaurants, including a steakhouse called Vic and Anthony's, the Italian-flavored Grotto's and La Griglia.

Fertittta brushes off questions about the challenges of operating an independent restaurant versus a chain: A "restaurant is a restaurant, food is food, a waiter is a waiter. You just take it to a little higher standard; that's the only difference."

Franchising is not an option, insists Fertitta, except for some international joint ventures and licensing agreements. "We like to control everything ourselves," he says.

Merchandising everything from t-shirts to drink mugs is a significant source of revenue. Walk into a Joe's Crab Shack and you run smack into a gauntlet of stuff. "We'll do $50 million in retail this year," Fertitta projects.

The culture is intense at Landry's, where this reporter was surprised to find Fertitta's assistant still at her desk at close to 9 p.m. on a recent weeknight. "Sure, we were all here," says Fertitta, when questioned about the late hour. "We're just a different kind of company. You either love it or you don't." Apparently, many employees fall into the former camp. Fertitta proudly points to the staff loyalty at Landry's. "I have basically no turnover in my senior management. On the unit level, we have the best statistics for general manager turnover and for operations managers-GMs and above-we basically have no turnover." Why?

"Compensation and credibility with our employees. We tell them something's going to happen and it happens. And they think you'll take them to the promised land."

Any new concepts on the boards? "No, we have enough concepts for now," says Fertitta. "Sure, we're always kicking acquisitions around. We're opportunistic. If a great opportunity comes along, we'll do it. If not, we'll keep plugging along."

Life is good at Landry's. So where does the company go from here? "Just keep building and maybe we'll make a few bucks along the way," Fertitta says

Joe's Crab Shack: The major growth vehicle for Landry's, Joe's had just one unit in Houston when Landry's bought it in 1994. At 138 units and growing, Joe's averages unit sales of about $3 million annually. Its kitschy seafood shack atmosphere features weather-beaten wooden decks, ceilings strung with party lights and fishnets and walls hung with fluorescent beer signs and wacky signage. Souvenir products such as t-shirts, caps and glasses fly out the door. To further enhance unit economics, Landry's clusters locations for operational efficiencies.

Rainforest CafÈ: Entertainment, education and eating come together at this family-oriented venue. Diners step into a jungle atmosphere with lush foliage, wildlife and even thunderstorms. The menu is inspired by Mexican, Italian, Cajun and Caribbean flavors. Rainforest is the only restaurant concept at all three U.S. Disney locations, reaping revenues of $73 million alone for Landry's last year. A new unit just opened on Atlantic City's Boardwalk. Landry plans selective growth of the brand at themefriendly destinations.

Landry's Seafood: This flagship concept offers a breezy but genteel Gulf Coast ambiance, circa 1940, located on prime waterfront locations and other high-profile sites in cities around the U.S. Fresh seafood gets star billing.

The Crab House: The original unit opened in 1976 in Miami. The brand's picturesque waterfront locations and Eastern seaboard ambiance boost the company's East Coast presence. The menu features fresh seafood with an accent on crab and lobster. The All You Can Eat Fresh Seafood & Salad Bar boasts freshly shucked oysters, cold steamed shrimp, crab and crawfish, marinated mussels, smoked salmon and an array of salads, fruits and vegetables.

Aquarium: Launched at Landry's Kemah Boardwalk complex southeast of Houston in 1998, this underwater dining adventure is part of the company's growing specialty division, with another unit opening this year at Opry Mills, Nashville. In the anchor restaurant, rays, sawfish, and other creatures swim right by the tables in floor-to-ceiling 150,000-gallon tanks.