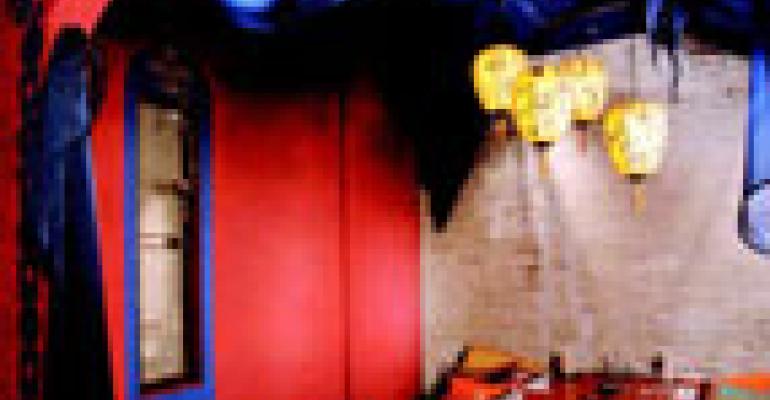 Authenticity counts — to a point — at a new breed of restaurants where spaghetti, soufflÈs and spanakopita are so yesterday.

Who would have guessed that Atlantans would crave whole grilled fish flown in from Greece? That a tapas restaurant would be hot ticket in Minneapolis? That Southern California could support a chain of more than three dozen casual Greek restaurants? That octopus would be one of the fastest movers at a NewYork Nicoisestyle bistro?

The creative minds behind these concepts all took calculated risks that appear to have paid off: Restaurants presenting distinctive and increasingly authentic tastes from the countries ringing the Mediterranean have become a mainstay on the dining scene.

The Mediterranean way of eating—stressing simple combinations of seasonal ingredients that stand on their own and lighter (if any) sauces—plugs right into two trends that show no sign of abating.

First, fans both of protein-heavy diets and lighter eating have a yen for meals reflecting the styles of Italy, Greece, Morocco, Southern France and other sunny destinations (aside,of course, from the pasta and bread). Second, the role of many more restaurants has evolved from a site to celebrate special occasions to a regular stop for lunch or dinner,and the Mediterranean style of eating fits the bill.

“I think today most people go out and eat because of a lifestyle, because they're busy doing something else. It's not for foie gras and caviar; the restaurant is ever more becoming a part of everyday life rather than a special treat,” says Lidia Bastianich, a celebrated New York City chef, restaurateur, cookbook author and host of the PBS program “Lidia's American Kitchen.”

Andy D'Amico, chef and partner with Nice Matin in New York, agrees. “There's certainly a comfort quality to the way I'm cooking right now,” he says of his Nicoise-influenced menu, where a stuffed roast duck is the fastest-selling dish. “The food is approachable, with good ingredients you can identify. If people want something different, it's here, too, but a good part of the menu is accessible.”

Cooking styles across the Mediterranean vary, but a core ethos units them: a reliance on the bounty of the region—including olives and olive oil, seafood, braised meats and a variety of fruits and vegetables. Chefs in the U.S. are doing their best to emulate this style.

“We're taking the very best ingredients in the marketplace, buying all our meats from one place, our produce from certain companies, we look for organic products and ship our fish in from the Mediterranean every other day,” says Sean Eastwood, co-owner and executive chef at Isabella's Estiatorio, a country Mediterranean cafe in Geneva, Ill. “We're trying to stay true to the philosophy of bringing in great quality ingredients and not manipulating them, which is the true quality of Mediterranean food.”

Many U.S. restaurants trying to duplicate the Mediterranean experience go to some length to procure imported ingredients. At Kyma, the Atlanta Greek restaurant that spotlights whole grilled fish, “anything we can get our hands on from Greece we do our best to get,” says executive chef Pano I. Karatassos. “We have had people come in with great products from Italy and France, and in all honesty, when we do a taste test, it's not the same. That's not to say that one is better than another, but if we're trying to be authentic, we need to buy Greek.”

At Solera, a Minneapolis tapas restaurant, “we like to be authentic within the realm of availability,” says Tim McKee, chef/owner. The 100-plus-bottle wine list is strictly Spanish vintages, and key ingredients such as anchovies, Serrano ham, cheeses, piquillo peppers, white anchovies, chorizo and dried, salted tuna loin are imported. The rest of the menu features local pork, rabbit, produce and other elements found in the area.

How much gets imported depends to some extent on check averages. The higher the average, the more likely a good portion of the ingredients were shipped from far afield. At Timo, a modern Italian eatery in Sunny Isles, Fla., chef Tim Andriola is selective about what he imports. The branzino he brings in from the Mediterranean is the star of the hottest menu item, a parchmentwrapped dish that incorporates the fish, basil asparagus, lemon basil butter, white wine and tomato, all served with a lemon confit. He favors Colavita olive oil, which he admits is pretty mainstream, but “the price is right, and that's something we have to be concerned about at our price point.”

At a fast-casual joint like Daphne's Greek Cafè, a chain with nearly 40 locations in California, hefty combo platters sell for $7 or $ 8 and the only thing not American on those plates might be the kalamata olives. At Kyma, that grilled lavraki from the Mediterranean fetches $22.50.

Not everything translates easily to the American menu.

While visiting Greece, Jim Botsacos, the executive chef of Molyvos in New York City, was stunned by how a butcher prepared a leg of lamb for yuvetsi, a braised dish with tomatoes, red wine, onions, garlic and orzo. “He whacked it up with a cleaver into all kinds of shapes,” he says. While he wanted to add yuvetsi to the menu at this rustic Greek restaurant, the challenge was figuring out how to control portions and make it look more presentable on the plate. The solution: portion the lamb into osso buco-style cuts.

He took a similar approach reinventing bougatsa, a semolina custard. In Greece, it would be baked on top of layers of phyllo in a large cake pan and scooped out. At Molyvos, the custard is baked alone in a sheet pan, scored and portioned out like polenta, wrapped in phyllo and baked to order.

Karatassos has also taken steps to adapt his menu to American tastes. He may serve whole wood-grilled fish, a traditional Greek specialty. But when it comes to the table, the head is gone and the fish has been deboned, because Americans don't want to deal with bones. In Greece, most customers of seafood restaurants want to choose their own specimen before it hits the grill. In Atlanta, very few exercise that option. “A lot of the things we're doing here are not necessarily the technique being used in Greece, but the dishes are true to their roots,” he explains.

While Solera's McKee also tries to honor his menu's Spanish roots, certain practices just don't cut it with the local crowd, so he has modernized some presentations. “In Spain, in a lot of dishes they love their olive oil, but people in this region would be pretty appalled,” he says.

Some tastes are never going to build up a huge following. Sweetbreads and oxtail ravioli were two slow sellers on the menu at Isabella's; for Arpa, the seafood from the Mediterranean takes a backseat to American varieties. Molyvos, on the other hand, sells 1,000-1,500 orders a month of octopus, either as an appetizer or else as part of a salad.

For the skittish, several Mediterranean eating styles, notably mezes and tapas, offer perfect introductions to diners leery of committing to an entrèe-size serving of something new. One of the mostordered items on the menu at Kafe Kabul, a Middle Eastern restaurant that is part of the Grounds for Sculpture in Hamilton, N.J., is a meze sampler that includes choices such as marinated anchovies, tabbouleh, roasted red peppers, buranee kadu, baba ganouj, hummus and marinated olives and almonds. “You can order four dishes for $15 and it comes out on little plates, so you get to sample a lot of things.

“It's the perfect grazing experience,” says Tom Condron, executive chef at Charlotte's Arpa Wine Bar, which specializes in tapas. The best sellers on his all-tapas menu include shrimp gambas (because “it's America, and Americans are in love with shrimp,” he says), chilled white asparagus, croquetas, fried calamari and chorizo in a rioja reduction. Originally the menu included a modest selection of entrees, but tapas sales overshadowed the larger portions

Sometimes the opportunity to sample isn't enough; it takes an educated staff to coax visitors into trying something new. Solera's McKee was a little nervous about how Twin Cities residents would warm up to tapas, which were a novelty in the area a year ago when Solera opened. “We've done a lot of training,” McKee says. “The staff has to understand the concept and know how to present it to the diner in a way to get the diner excited about it and overcome any apprehensions he or she might have.”

But not all chefs are putting forth sufficient effort to make their food more accessible to the dining public. Mediterranean cookbook author Paula Wolfert says most Moroccan cuisine in the U.S. is stuck in a time warp. She thinks too many Moroccan restaurants rely on the same few dishes, a practice that doesn't encourage frequent repeat customers. And couscous, a staple on the Moroccan menu, is rarely done well in the U.S. “Couscous has the ability to expand to six times itself, but it doesn't do that the way most people cook it. So you really feel heavy and you don't have good memories.” A few restaurants, such as Chez Panisse in Berkeley and Picholine in New York, prepare it correctly: make it from scratch and steam it. “It's a mess, but people really love it and it's really popular,” Wolfert says.

For some Mediterranean Rim restaurants, the hardest part sometimes is getting people in the door the first time. “I think people are ready,” Karatassos says. “The tough part is getting those who are completely unfamiliar with the cuisine to finally try it. Once they get here and see what it's all about, they seem to enjoy it.”