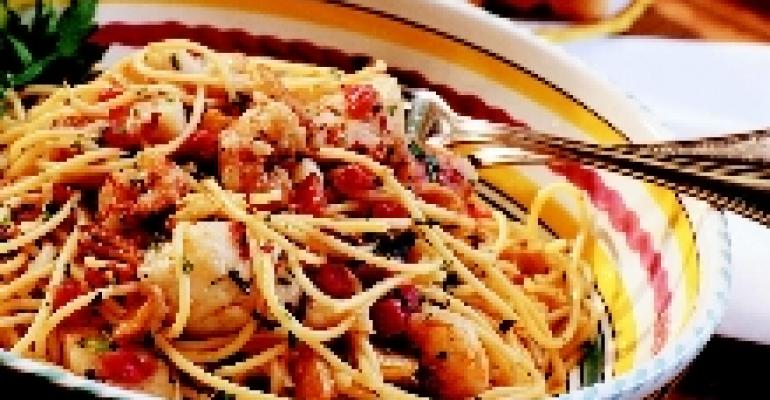 That said, is there a method to specials creation and selling? You betcha. Just like the science of menuing, there are tested strategies for putting together an effective specials program that appeals most to guests while putting more profits in the operator's pocket.

Creating specials can also be a complex task, with a dizzying number of variables to consider, from detailed daypart analysis, to the concept and price points, to profit margin projections. It also requires proper training of your staff, because if they're not selling specials correctly, not only will you not make money; you could take a loss.

"Specials can be powerful, for a number of reasons," says Bill Paul, a Cincinnati-based menu consultant. "First, they can really help freshen and expand the daily menu. They can act as a restaurant's test kitchen, for trying out new products, new styles of merchandising, different concepts. They can act to utilize unused inventory that needs to move out. Specials also give restaurants the opportunity to increase or maximize profitability. They're wonderful when done correctly."

But done sloppily or with little thought, specials can actually hurt profits and drag down your operation. "Sometimes people get off track in how they think of their specials; sometimes they don't have all the pieces in place to do specials as well as they can," says Paul. "It can get very involved. Whether offered once a week, daily, breakfast, lunch or dinner, every restaurant has to work out their specials based on such factors as who their guest is, what their capabilities are, the size of their operation, the style they offer, etc."

For example, offering a daily special might not necessarily be the most cost-effective, profitable way to go. "One needs to match up specials with the determined frequency of guest visits," says Paul. "Say your typical guest comes in twice a month. It might be feasible to change out a special every two weeks; the benefit of not having to change every day could have a potentially great impact on the success of those specials because, for one thing, you're not under the gun to create something new every day. You have time to come up with things that are better thought out as far as presentation and costs. Plus, it increases the item's familiarity for your staff."

Maximizing Profit Potential
Profitability is obviously a key issue. "There's still a tendency in the restaurant industry to think in terms of food cost percentage when developing a product, and that's not always the most advantageous way of looking at it," Paul explains. "Maintaining the lowest food cost percentage will maximize profitability in less than half the cases. So half the time food costs will maximize profitability; the other half they will not. The key is finding products that have both good food costs and good profit margins."

"It's all about your goals," says Gregg Rapp, a menu engineer based in Palm Springs, CA. "What are you trying to do? Pull in people? Add variety? If the goal is to pull in more people, then do a price special." But you have to be careful, he cautions. One of the biggest mistakes operators make is to promote based on price and then direct their waitstaff to push that special as soon as the diner is seated. Yes, the low-price special brings them in, but let them have a chance to see other menu options; ideally they will opt for a more profitable dish. Rapp suggests burying the special in the menu with a note along the lines of "ask your server for today's special."

On the other hand, if specials are profitable for your operation, say in a fine dining establishment, Rapp says go ahead and sell, sell, sell.

Certain products are better suited for specials than others. The type of special you offer in a casual restaurant will differ from what's offered in a fine dining establishment. For example, higher-ticket restaurants might have more success selling lamb as a special than as an everyday item, because lamb matches the upscale image they want to convey. Fans of lamb expect that if they buy it in a finer establishment, it will be better than lamb sold elsewhere. "If it's sold as a special, it communicates that it's fresher, it's better, it's more unique and it encourages those people to really consider it," says Paul. "And, as lamb's not inexpensive to begin with, you can price it higher."

Offering a low-cost item during a slower daypart can create a boom in business.

Sometimes taking items that sell well in a restaurant and simply changing their preparation or saucing, say, is enough to make the product "special." For example, take a universal favorite like salmon and spruce it up with a special sauce or crab cake on the side.

For casual dining operations, offering a low-cost item during a slower day or daypart can create a boom in business. For example, Rapp points out, not so long ago chicken wings were a waste product and dirt cheap, and savvy restaurateurs started promoting wing specials; now that everyone wants them, the price has gone through the roof. And Quaker Steak and Lube out of Sharon, PA, found great success with its all-you-can-eat rock shrimp special. The owner, says Rapp, found a deal on rock shrimp at a trade show and created a huge seller and a subsequent signature item. "The lesson here is to look for the cheap items and make specials out of them."

Selling Staff on Specials
Do your servers rush through presenting specials, stumbling over pronunciations and come off as ill-informed about their components and preparation? You could be losing precious profits.

"Getting people to sell products at the table is one of the most difficult challenges restaurateurs have in any environment," says Paul. "It's so important to train them properly to sell."

Paul and Rapp both recommend tasting sessions for employees to familiarize them with profitable specials. If they like them and are familiar with them, they're more likely to promote them. Managers must also be clear to servers about prioritizing what they want sold.

And what's better: Verbal or written descriptions? Both, Paul contends. "I think it's always good to do a verbal presentation first. If you take time to develop the descriptions so they sound appealing, to maximize the sale of specials you ideally do your suggestive selling presentation before the guest reads the menu, while they're open-minded. Once guests open the menu and read it for five minutes they've pretty much made up their mind what they want and then you'll have a harder time selling. Then support the verbal presentation with a printed sheet that you either leave with the menu or have on the menu."

Adds Rapp: "You can list specials on a blackboard, table tent, fresh sheet. It's like a grocery store shelf—put your most profitable items within easy eye reach."