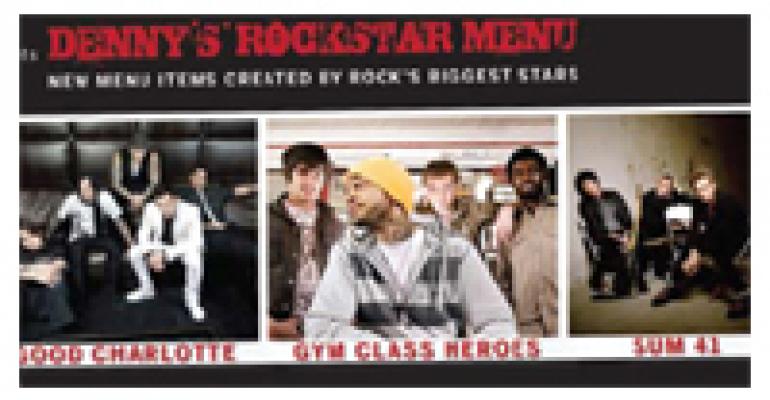 Quirks That Work: Ideas to Get Your Marketing Message Across

30+ outside-the-box ideas to help you get your marketing message across.

Winning the battle to fill seats is always a challenge, but these days it takes more than just tasty food, sharp service and exceptional surroundings to drive business. People need to be lured — whether it's by a great deal, a social media hook or a reason to celebrate — before they will cross your threshold. Here is a collection of ideas that might provide a little inspiration.

Look for a hook: a theme, that is.

Baby boomers respond well to nostalgia themes. Alfred Portale's Gotham Bar & Grill figured that out this past summer, when he rolled back menu prices to 1980s levels to cook up some traffic on Sunday nights through Labor Day.

The ongoing Allnighter promotion at Denny's combines two draws for the youth crowd: a late-night, musician-inspired menu and popular music between 10 p.m. and 5 a.m. Recently the chain collaborated with country band Rascal Flatts to create the Unstoppable Breakfast, a biscuit topped with country-fried steak, eggs, American cheese, country gravy and three bacon strips, with a side of hash browns.

North Pond Restaurant in Chicago paired a 1929-inspired dinner with an expert panel discussion that analyzed the current state of the economy. There was no retro price on the $59 retro meal, which included a “bathtub gin cocktail,” consommé, candied beets, Waldorf salad, lobster and quail à la king and a pineapple upside down cake.

Speaking of nostalgia, Café Adelaide and Swizzle Stick Bar in New Orleans launched Everything Old Is New Again Thursday and Friday nights to celebrate the era of the supper club. Evenings feature eating, drinking, dancing and “carrying on.”

A number of San Francisco-area restaurants recently created theme nights that stirred up business during normally slow periods, including:

Give a gift: a gift card.

Manny's Steakhouse in Minneapolis jumped on an opportunity when the local Morton's Steakhouse abruptly shut down. Manny's reached out to guests holding Morton's VIP and gift cards, inviting them to join the Parasole Dining Club, run by Manny's parent company, and offering them a $100 credit at Parasole's restaurants for doing so. “No restaurant can replace Morton's, but we want to give its loyal guests an opportunity to discover a restaurant we hope they'll love just as much,” says Phil Roberts, founder of Parasole Restaurant Holdings and Manny's Steakhouse.

The Akron branch of Fleming's used gift cards to boost private events. The restaurant rewarded the host with a $50 card for every $500 spent, plus a $25 card for each guest.

Bring in a guest chef/author/bartender.

Routines and consistency are admirable, but sometimes they border on boring. Stirring up a little excitement is as simple as having someone else mix the cocktails, or sauté the supper, and connecting this kind of special event with a charity builds good vibes with your guests and would-be guests.

At Vie in Chicago, frequent customer Jim Adams approached owner/chef Paul Virant with a proposal to bartend for a night. For every drink sold, $1 went to a local charity, and Vie matched the donation. Sbicca Bistro in Del Mar, CA, has scheduled similar guest bartender nights regularly for more than two decades, inviting fundraising groups to bring in their own bartender.

The author of a book about bees caused a buzz at FARMbloomington's Summer Culinary Guest Dinner Series earlier this year. The $44 five-course dinner included a welcoming cocktail; honey-flavored beverages and a wine pairing were extra. A local honey farm provided samples of its products at the Indiana restaurant.

For Blue Restaurant & Bar in Charlotte, NC, the ticket is opera. A $65 multicourse meal includes performances by artists from Opera Carolina and a champagne reception. At the opposite end of the cultural spectrum, Boston's Rialto Restaurant & Bar brought in Harvard University's Hip Archive for an evening of break dancing and food.

Make a game of it.

Contests can be a fun way to drum up some action. Ted's Montana Grill recently asked burger fans to explain why they like the chain's version; in exchange, entrants qualified for a free burger and a chance to win a Toyota Prius or a trip to Montana. Fans were invited to upload a photo, make a video, perform a song or write something describing their feelings and submit it to the company's website. “Say it. Sing it. Or shout it out,” says George McKerrow Jr., c.e.o. of the chain. “We want everyone, everywhere, to know just how great our burgers really are, and who better to tell the world than our very own fans.”

Schlotzsky's introduced three Big League Clubz sandwiches with the help of a web microsite in which fans could enter a sweepstakes to win a trip to St. Louis during Major League Baseball's all-star game. The site included video games and a fantasy baseball league that involved drafting friends for teams. It included links to Facebook and other social networking sites.

This past summer, a new operation in Atlanta, Pacci Ristorante, promoted its presence by letting a server's coin flip determine whether breakfast was on the house. The promotion, called The Scramble Gamble, covered special menu items. “We wanted all the neighbors to know that we're a great place for breakfast, so we came up with the Scramble Gamble as a way to introduce ourselves to them,” says Keira Moritz, executive chef. The staff delivered sugar cookies decorated to resemble fried eggs to invite neighbors to try their luck.

U eat free/pay what U want.

Mama Fu's, a chain of pan-Asian eateries, ran a “Mamas Eat Free” week-long program in conjunction with Mother's Day that helped the chain set net sales records for nine individual store days. The brand used its e-mail database, Facebook and Twitter to publicize the offer, which comped the check for moms who brought their families in to dine. Stores gave away an average of 450 meals, but checks for the parties using the deal were 50 percent higher than average. “A big part of our business is families and we wanted to do something for moms on Mother's Day,” says Randy Murphy, Mama Fu's president and c.e.o. It was the first of what the company says will be a series of brand-building campaigns.

Bootsy's in Cincinnati gave away $2 million in gift cards during the summer to celebrate its first summer season. Guests who bought a minimum of $15 or $25 in food at Bootsy's during certain time frames received $25, $50 and $100 gift cards for any of the Jeff Ruby Culinary Entertainment restaurants in the area.

Eighty One, a new upscale modern American eatery in New York City, launched a value-driven two-course menu by offering it for free to the first 150 guests visiting on the restaurant's one-year anniversary. The value menu, at $31 for two courses (chosen from appetizers, mains and desserts), was priced lower than some of the regular entrees alone. Chef/owner Ed Brown noted that the promotion was designed to make Eighty one seem more accessible and, ultimately, to drive traffic.

Table 301 in Greenville, SC, saw Wednesday night revenues jump from zero (the place had been closed) to nearly $7,000 shortly after introducing a pay-what-you-think-it's-worth deal. Drinks were listed at full price, but everything else was up for bids. A few parties have cheaped out, but the higher volume of business has balanced that out.

Gordon Biersch locations across the U.S. ran an employee discount promotion earlier this year, with lunch specials going for 40 percent off the regular tab.

And at Ben Pao, a Chicago Chinese restaurant, all tables get a $50 per table discount once a week when the golden gong is sounded.

Whist and Blue on Blue, restaurants in two L.A.-area luxury hotels, kicked off 2009 with nine days of dining deals offered to Facebook users who signed up as fans of either restaurant. Deals included $1 specialty cocktails and beer, freebie lump crab fritters and more.

Looking for other ways to use Facebook and Twitter to drive business? You'll find articles at www.restauranthospitality.com; search for “social media.”

How's about a little romance?

Valentine's Day isn't the only day when your guests want romance, but it's a nice jumping-off point for togetherness-themed promotions. The Oz. in Bethesda, MD, ran a Cooking Couples class in February, Executive chef Timothy Jones led participants through preparation of a four-course healthy aphrodisiac-inspired meal. The $100 fee included parking, recipe cards, refreshments and a special gift.

Valentine's Day at SushiSamba in New York City meant more than a special menu. Singles were invited to sign up for the restaurant's Sushi and Sake 101 class and complete a matchmaking questionnaire that the staff used to suggest two to three perspective couples.

Want wedding business? Take a cue from Lettuce Entertain You Enterprises, which hosted its first bridal fair in February to showcase 20 of its Chicago-area restaurants. Brides- and couples-to-be were invited to sample food and cocktails and check out how the company's restaurants would handle rehearsal dinners, postwedding brunches and more. A concurrent bridal fair focused on wedding-related services and products. The 450 attendees received free admission and valet parking. The potential business? Priceless.

BOGO, Other Deals Have Most Impact

A June 2009 survey by Technomic for American Express showed, not surprisingly, that value is very much on the minds of consumers. Here's what influenced Americans to dine out at least once in recent months:

More than nine out of 10 consumers said a BOGO entrée offer would be “extremely” or “somewhat” appealing; more than three-quarters liked the idea of a combo meal for a set price.