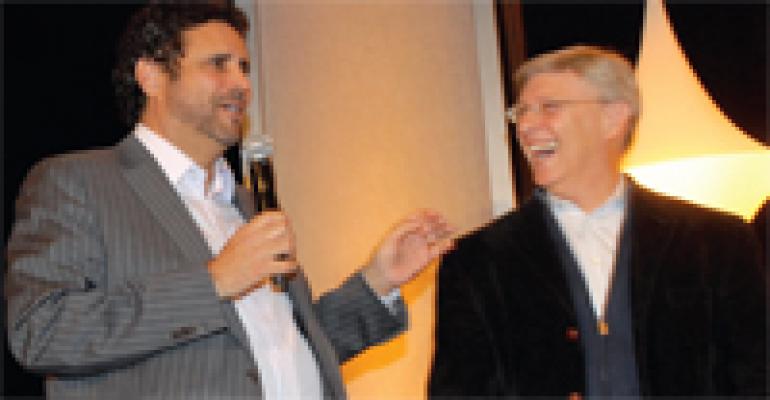 The U.S. economy may be tanking, and many operators may be panicking as they see customer counts fall, but it's hardly the end of the world. Speaker after speaker at this year's 10th annual Restaurant Hospitality Concepts of Tomorrow Conference urged attendees to use the current environment to think opportunistically, pounce on what are sure-to-be-vacated prime locations and improve on their basic food, design and service offerings. The key, they stressed, was to look at ways to retain loyal customers and to create a reason for new ones to visit once the market rebounds — as it is sure to do — and consumers feel better about dining in restaurants again.

“People are spending money,” observed keynote speaker Howard Gordon, a longtime Cheesecake Factory top exec who is now president of the Gordon Group. Shrewd restaurateurs will try to capture as much of that money as possible, he added. The average American family may have curtailed its spending on food away from home, but interest in all things food-related continues to be strong, thanks to TV cooking shows, the cult of celebrity chefs and more, he noted. “There's a lot of business going on out there,” Gordon observed.

The question operators need to ask themselves, he suggested, is whether they are making their restaurants a place people want to be. And by the way, he added, if you think things are going to be bad, they will.

For the value-conscious, there are ways to entice interest besides simple price cutting, Gordon added. Encouraging guests to share orders, menuing less expensive items such as salads and other ways to offer more value-oriented choices are options. And if you're doing something, make sure to get out the word about it.

Besides getting one's house in order, Gordon thinks “location is huge” when it comes to ensuring long-term success. He advised sticking to “A” locations and avoiding “B” spots — the higher rent will pay off in the end, he said.

McAlister's Deli is experiencing a flurry of recent expansion, but chairman and c.e.o. Phil Friedman acknowledged that “it's getting sticky” out there when he looks at the future. Friedman said McAlister's has succeeded by following a “we win if you win” approach toward franchisees. He said some of the typical animosity that crops up in the relationship is offset by two practices: working closely with franchisee committees and scheduling two major face-to-face events a year. “We think a lot about relationship management,” he added.

THE RHINOS HAVE IT

The dynamic Dave Magrogan, whose company operates two Irish pub concepts, offered his own prescription for dealing with challenges such as the current economy: “Life is 10 percent what happens to you and 90 percent how you react to it,” he observed. And how you react, he added, depends on whether you and your staffers are “rhinos” or “cows.” Rhinos are high-energy, proactive and wake up looking for adventure; cows prefer things to be handed to them.

Magrogan is big on goal setting. He follows a five-step technique:

Magrogan, trained as a chiropractor, has adapted his pub concepts as they have expanded. At first he wanted them to be the next P.F. Chang's, but he realized after operating for a while that pubs have a narrower niche and belong in different markets, such as college towns and locations within walking distance of residential areas.

Fred LeFranc, who has experience turning around some troubled brands and now runs his own consulting firm, focused on strategic planning and execution. He described today's climate as a “whitewater market,” and stressed the importance of facing it by working out a clear strategy for success and focusing on core strengths while minimizing weaknesses.

Operators can be creative about finding ways to boost sales, shave costs or motivate staffs. One of the most productive exercises in his experience was a staff brainstorming session to suggest ways to save money. LeFranc said asking for ideas was more productive than dictating to employees.

“If you want to increase sales and increase profitability, measure it and post it on the wall,” he advised.

Patrick Colombo, who helped establish the Sfuzzi chain of Italian eateries and most recently developed Cru, a budding chain of wine bars (and a featured RH Concept of Tomorrow), reminded the audience that they should focus less on being all things to all people and more on the three or four things they do better than anyone else. In developing Cru, he looked at the Starbucks model for inspiration, especially the way the brand was able to attract customers more than once a week.

Cru has succeeded by making a sometimes intimidating subject — wine — approachable. That's been accomplished through a design that has created talking points for the servers, along with the flights approach, which allows guests to sample a variety of wines without committing to a whole glass or bottle.

Colombo also acknowledged the importance of location in his brand's success. “I like to think that we draft off” the other restaurants and stores in the vicinity, he said.

Past Richard Melman Concepts of Tomorrow winner Cameron Mitchell joined this year's program to offer an insider's look at his recent sale of Mitchell's Fish Market and Cameron's Steakhouse to Ruth's Chris. The deal — a fantasy for many concept developers — was not without a few hitches, as Mitchell explained.

Today, Cameron Mitchell Restaurants is focusing its energies on developing restaurant brands, not necessarily to find buyers for them, he said. “I think it's a slippery slope to develop a brand with the intention of selling it,” Mitchell observed.

The final speaker of the conference, Technomic senior manager Kevin Higar, took the audience on a whirlwind tour of the current state of the industry, providing strategies for dealing with the challenges it presents. He pointed out that consumers are facing a perfect storm: Economic uncertainty and lower perceived (or actual) home equity has eroded consumer confidence. In addition, the rising costs of food and energy are the two top concerns for consumers. As a result, when they do go out for a meal, they want to be sure it's worth the investment.

To capture more consumer dollars, Higar suggested operators focus on providing consistently solid basics (service, food, décor), while developing qualities that differentiate them from the competition (lifestyle integration, menu desirability, a sense of hospitality). But he advised against any drastic reactions to current market conditions.

“Stay true to who you are,” he suggested. He isn't seeing any fundamental changes in consumer behavior to suggest otherwise.

For more photos from 2008 Concepts of Tomorrow Conference, select here.