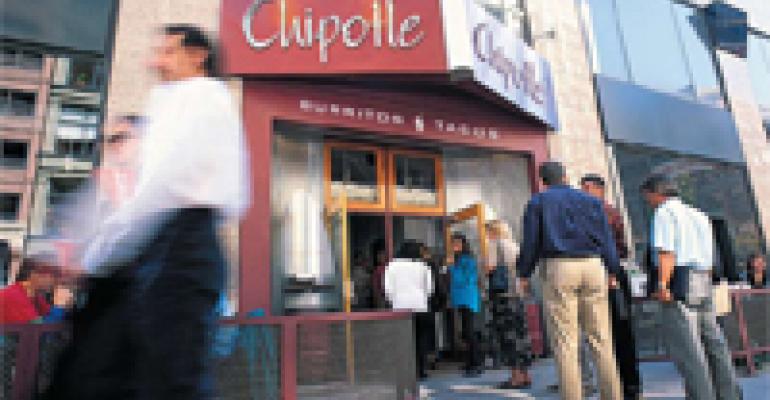 There Will Be Lines

You can't get more things right about restaurant chain development than founder Steve Ells and the rest of his management team have done at Chipotle Mexican Grill (CMG). Ells and company created their then-idiosyncratic fresh-Mex concept back in 1993, got their money out once by striking an agreement with McDonald's in 1998, then cashed in again and regained control when CMG became a public company in early 2006. Throughout the chain's 15-year history, the menu, the food and the interactive customer experience have remained virtually unchanged, even as the company built itself out to its current 730 stores.

Chipotle proved that you could serve really good food fast, price it so it was accessible to everybody and make a bundle of money for yourself and your investors in the process. It's been so successful that it has become the standard reference point to anyone who speaks or writes about the fast casual part of the industry. All of which is why Restaurant Hospitality has chosen Chipotle Mexican Grill as our 2008 Chain of the Year.

Through it all, Chipotle has been careful to make sure its dining experience isn't fast per se. Every customer interacts with at least two employees, personally directing how their burrito, taco or bowl should be built. Although it would be quicker from an operations standpoint to have a few predetermined combinations workers could pump out in a hurry, or even preassemble during busy times, Chipotle doesn't go that route. Instead, mass customization is the service format, even though it causes the line to move slower. And as anyone who has eaten at a Chipotle knows, there will be lines.

But the rest of the Chipotle dining experience fits neatly into the fast-casual template. Burritos and tacos — hand-held foods that are inherently messy to eat — are as casual as it gets. And the minimalist design — lots of corrugated metal and other hard surfaces — gives units a certain industrial chic. It must have been tempting in the beginning to go with an old-school cantina motif, but Chipotle went in the other direction.

It went in another direction with its food, too.

Right from the start, Chipotle committed to using only fresh, premium ingredients. Ells' background in high-end cooking (he's a Culinary Institute of America grad who worked under Jeremiah Tower at Stars in San Francisco before founding Chipotle) had already convinced him this was the only way to go. But until Chipotle came along, nobody was doing it in this service format, let alone at this price point.

Ells took it a lot further, sourcing as many items from small family farms as possible. Protein items, in particular CMG's early partnership for pork products with upscale (and costly) purveyor Niman Ranch, were a special emphasis. Where Chipotle's protein ingredients came from, and how the animals used to produce them had been raised, gradually became a huge emphasis for the chain (see sidebar).

The genius of this “Food with Integrity” strategy was that while its lofty principles resonated deeply within Chipotle's customer base, Ells had also figured out how to source this level of product without breaking the bank. CMG has since ridden the farm-to-table trend to the top, lately finding itself positioned on the right side of key food-related issues.

More importantly, high-end ingredients make for great-tasting food. Many in Chipotle's now-vast customer base were not regular burrito-eaters before Chipotle came on the scene. They are now.

Having a great concept and sticking to it are keys to restaurant chain development. So are site selection, operations and financing. Chipotle did these things adequately on its own, but it wasn't until it hooked up with McDonald's in 1998 that it really became sophisticated in these areas. Chipotle had 14 restaurants in 1998. It had grown to 480 restaurants by the end of 2005.

It wasn't exactly a buyout. Ells structured the deal so that McDonald's got input on some, but not all, issues. He told Fast Company the idea was “that McDonald's would essentially become ‘the banker’ without changing recipes ingredients or culture-all the elements to which Chipotle fans and team members are loyal. Today (2004), Chipotle selectively uses McDonald's resources for such things as distribution while leaving Chipotle's original concept essentially unchanged.”

That concept remains unchanged today, but the financial results differ dramatically. When McDonald's divested its Chipotle holdings, it produced an IPO that's still talked about on Wall Street today. CMG stock was offered at $22 per share on Jan. 25, 2006, doubling to $44 per share by later that day. On Dec. 31, 2007, CMG's share price peaked at $155. Now trading in the $70-80 range, the company is seen as a bellwether of the restaurant industry, particularly in the current economic environment. Analysts now worry that a humble Chipotle burrito has become an “unnecessary luxury item.” If Chipotle, with its food and its pricing, can't weather the storm, the thinking goes, who can?

Analysts think there's plenty of room for growth left, with the chain peaking out somewhere between 1,200 and 1,500 units. At the unit level, methods for keeping the ever-present lines of customers moving more efficiently are still a major operational focus. And when long lines are your biggest problem in the middle of a slowing economy, you know a restaurant's growth isn't over yet. It definitely isn't at Chipotle.

Chipotle's mantra, “Food With Integrity,” sounds like a slogan an ad agency would dream up to tap into consumer interest in the origin of the foods being served to them. But this approach has been Chipotle's core principle since 1993.

The most notable move was the addition of Niman Ranch pork in 2000. Previously available only in white tablecloth restaurants, now customers could get it at Chipotle for a fraction of the price. Ells and Bill Niman himself would attend Chipotle openings to get the word out.

CMG followed suit by adding other naturally raised meats — chicken, then beef. This year Chipotle will serve 52 million pounds of “naturally raised” meats coming from animals that are raised in a humane way, aren't dosed with antibiotics or hormones and are fed a pure vegetarian diet. All the pork and chicken served at Chipotle meet this standard; 60 percent of its beef does. Cheese and sour cream served by the chain come from cows that aren't treated with rBGH (recombinant bovine growth hormone).

Here's how the chain positions its approach:

“Food With Integrity is not a fad. It has been part of Chipotle since we started in 1993. Its importance has grown as we have grown. And make no mistake, growth can be good. Our size helps us influence the decisions of our suppliers. And it lets us shoulder our way into the consciousness of the American eating public. Like we're doing now. Our size means we can change for the better the way more people eat.

“Looking forward, it means encouraging growers to pursue humane and healthy practices, and rewarding farmers who eschew mass production in favor of quality. ”

Chipotle is basically telling its customers they're doing the right thing by wolfing down hefty-sized burritos that don't cost very much. As a value proposition in the current economic climate, it can't be beat.

The chain isn't stopping here. The latest initiative: A commitment to purchase 25 percent of its produce items from small and mid-sized local farms when seasonally available.