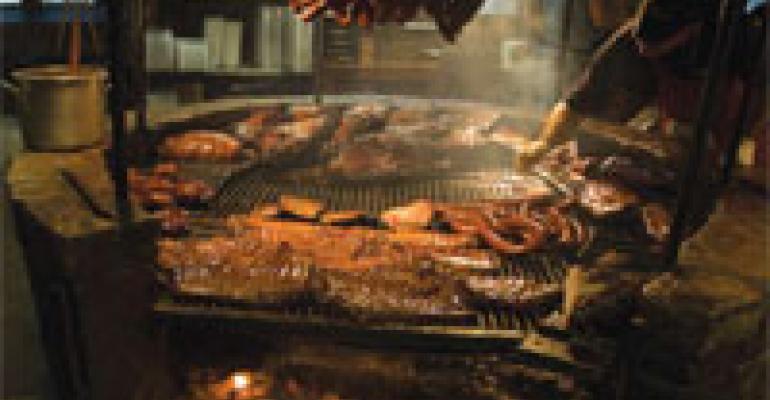 Lessons from Austin PitmastersInside the Cult of 'Cue

How's this for a confounded concept for destination dining?

Location? The boonies. Exterior? Looks like a barn. Interior? Looks like a high school cafeteria with a few stuffed animals on the wall, seating 560. China pattern? Brown butcher paper will do fine, thank you. Utensils? You were born with hands, weren't you? Kitchen equipment? Handmade brick “pits” caked with carbon. Fuel? Some cowboy with a pickup and a chainsaw brings it. Menu? The ultimate in slow food. It takes 5-6 hours to cook a brisket. If we run out, you're gonna hafta eat somewhere else. Service? You want to eat, get off your duff and come to the counter. Cost per entree? Pay by the pound. Wine list? Shoot, son, we don't even sell beer.

That's more or less been the business model for Kreuz Market in Lockhart, TX, for more than a century, and purt near the same concept for a herd of other joints in the Austin Barbecue Belt. Their names make carnivores salivate, face south and genuflect. Not much has changed at some of these joints in the past century, iffen you don't count internet ordering and overnight shipping.

Charles Kreuz started his place in 1900 just a horsehair off the town square in downtown Lockhart, where Smitty's Market squats now. It was just a grocery store with a meat market at first. He whupped up his own sausage and smoked meats. Tuckered out cotton pickers and cowboys would buy his grub wrapped in butcher paper, and sit outside to chow down with their hands and pocket knives. Before long he put in tables. In 1999 the new owners moseyed to the north edge of town and built a new place. But there still ain't no plates or flatware.

The menu couldn't be simpler: brisket or shoulder clod ($9.90/lb.), pork spare ribs and pork chops ($9.50), ham ($7.90), sausages ($1.45-$2.00 for a big fat link), and boneless prime rib ($17.90). White bread, tortillas or crackers are tossed in because it's traditional. Beans (most definitely not sweet), German potato salad and sauerkraut are the sides ($2.80/pint). There's soda, iced tea and lemonade, but no beer or wine. A personal-size pie is $2.50. Prices are the same if you order online (shipping is extra), and because of their reputation, they are among the highest prices in the barbecue belt.

Barbecue is king in Texas, and if you haven't experienced it firsthand, you have nooooo idea. Texas barbecue is as different from Kansas City, Memphis and Carolina as a cow is from a steer.

There are three important culinary influences: European immigrants, freed slaves and Mexicans. Nope, cowboys didn't have much to do with it.

Czech, German, and Hungarian immigrants came in large numbers in the mid 1800s and they brought their expertise in making sausages and smoking meats, common practices in the homeland. Slaves were relegated to eating the tough cuts of meat such as ribs, shoulder, brisket and the scraps, while master ate high on the hog, the tender loin. So they learned the art of low and slow cooking, a technique we now understand allows the collagens to liquefy without tightening the proteins and squeezing out the juices. Mexicans, with their Spanish, Mayan and Aztec roots, were masters of spices, chilis, corn, tortillas and beans.

The influence of all three groups can be found in practically every barbecue joint in Texas, although the house style will vary if the owner is Bohemian, African-American or Tejano. One thing they have in common: You can taste the tradition and the history in every bite. This is cooking that has stood the test of time. “Barbecue is not what we do, it's who we are,” says Tim Mikeska of Rudy Mikeska's in Taylor.

Kreuz is the most famous in the barbecue belt, and the whole cotton pickin' state for that matter, but calling it the best will start a kerfuffle in any Austin bar with no shortage of hombres to defend the honor of Smitty's, Southside Market, Cooper's, Black's, Louis Mueller's, City Market, The Salt Lick, Broken Spoke, Stubb's, Taylor Cafe, County Line, Iron Works, Meyer's, Opie's and Rudy Mikeska's, just off the top of my head. They're all in or within spittin' distance of the state capital, and they all dish up the Holy Trinity of Texas 'cue: Brisket, guts and ribs.

Brisket is the national food of the Republic of Texas. A whole barbecue beef brisket is a huge clod of meat, in the 12-16 pound range. It is a cheap cut of cow, especially the select grade favored by many restaurants, as tough as a boot if you grill or roast it over high heat. Yankees turn brisket into corned beef, pastrami, or pot roast. But in Texas brisket is smoked low and slow for 8 to 18 hours over glowing post oak and mesquite coals. It comes off the pit almost black, looking more like a meteorite than a meal. But it is not burnt, and beneath the crust is tender, juicy, smoky meat which, when sliced ¼-in. thick, melts in your mouth like buttah. You can get it on a sandwich in some places, but most places dish it up nekked on a plate or butcher paper. Some offer it chopped on a bun, but here's a tip: The best meat is sliced, not chopped.

Guts, also known as hot guts, are fat, greasy, spicy, smoked sausages, packed in snappy natural casings (hence the nickname). Some are hotter than a $2 pistol and others are quite mild. Some cooks mix in pork or other meats, but most are beef. Don't ask for a bun or mustard or sauerkraut. Jes pick it up with your fingers.

And don't ask for no dadburned barbecue sauce at Kreuz. They have none. Only some hot pepper sauce on the tables. Although most other Texas barbecue joints serve barbecue sauce nowadays, it's something totally different from what most of us call barbecue sauce. Beef don't cotton to sweet sticky sauces, so most Texas sauces are typically thin and tart, flavored with vinegar, chili powder, lots of black pepper, cumin, hot sauce, fresh onion and a touch of ketchup or tomato sauce. They often resemble a thin tomato soup and penetrate the meat rather than sit on top. Some of the best have meat drippings, and so they cannot be bottled. They are used as an optional finishing sauce for everything, including sausage, mutton, pork ribs, chicken and goat.

In the small towns of Lockhart, Taylor, Luling, and Elgin, the barbecue restaurants are the heart and soul of the town. Their large capacity seating makes them the natural place for events of all sorts, from weddings to football banquets. And I'm not kidding about this being destination dining. Rick Schmidt of Kreuz says that 85-90 percent of his customers come from outside the county. When I had lunch at Opie's in Spicewood six guys choppered in and landed in a parking lot out back. Cooper's leaves a van at the local airport. At Black's the parking lot often looks like a Harley dealership.

Earlier this year I made a pilgrimage to Austin and barely ate my way out alive. The photos herein are just a taste of what I witnessed.

Barbecue is not the only reason people are drawn to the Austin area. There are a numerous other good restaurants, the Capitol Buildings, the University of Texas, the LBJ Presidential Library, several excellent museums and a vital arts community. There is also a major music scene that rivals Nashville, especially in the 6th Street downtown warehouse district. South by Southwest has become a major music and film festival every March, just about the time the abundant wildflowers begin to bloom. In recent years the flavor of New Orleans has been seeping into the dining and music scene with the arrival of the refugees from New Orleans after Hurricane Katrina, so don't be surprised to taste gumbo in your chili.

The city's motto is “Keep Austin weird,” and Austin is definitely different than the rest of the state. Evidence: In 2004, in a red state, in the county where George W. Bush sat as Governor, the citizenry voted for Kerry over Bush 56 percent to 42 percent. The Colorado River flows through the city and water sports are a big part of the lifestyle. Just west of the city is Hill Country, which is rapidly becoming Wine Country with more than 20 wineries. The LBJ Ranch is now the Lyndon B. Johnson National Historical Park west of Austin. Texas A&M, Houston, San Antonio and Dallas are not far, but why bother with so much to do and eat in and around Austin?

If you'd like to study more about Texas barbecue, here's where to go: