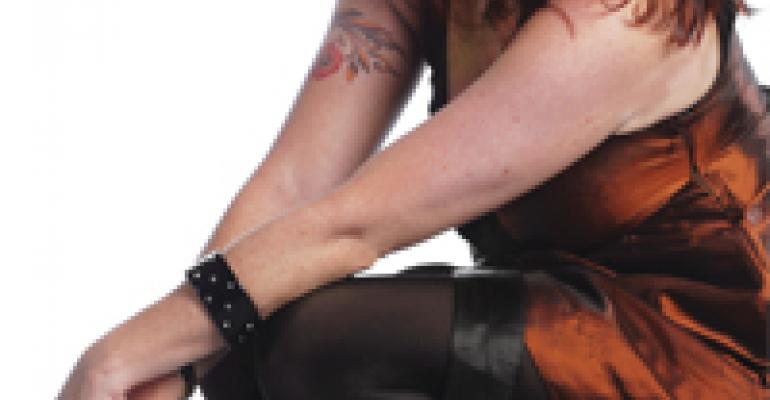 Michael Symon is all over the airwaves these days, taking on the latest Food Network Iron Chef challengers and whipping together meals on “Dinner: Impossible,” developing a cookbook and debuting Roast, his first venture in a hotel, an 8,000-square-foot meat-lover's mecca at the lovingly restored Westin Book Cadillac in Detroit. Wife and business partner Liz Symon takes care of making sure the vibe, the look, the wine and service in the front of the house are up to the lofty standards of what leaves the kitchen at the acclaimed Lola, its more casual stepsister Lolita and now Roast. She recently took a breather from managing preopening details in Detroit to catch up with RH's Megan Rowe.

RH: So, Michael is becoming a household name, you two are branching out to Detroit with your partner, Doug Petkovic…things are good. How did you start on this road?

Symon: Michael and I started working together in 1991 at Players on Madison here, and when he took over Caxton Cafe in 1995, he hired me as the manager. We were friends for a long time, but shortly after Caxton we started dating. We opened Lola in the Tremont area in 1997.

RH: Going into what could at best be called a transitional neighborhood must have taken a leap of faith.

Symon: When we decided to buy it, everyone told us were were crazy. They said it might be busy enough on weekends, but not Monday through Thursday. But it was busy from day 1; we opened at 4:00, and the bar was full by 4:30. When Michael left, Caxton was really coming into its own and I think people were interested to see what we were going to do. Also, we always had a lot of support from other restaurateurs, and we always tried to to support them, and I think it paid off. Buzz created more buzz. Then people felt more comfortable opening their own restaurants.

RH: I know you started out as a server and worked your way into management; how did your role evolve and expand with Lola?

Symon: I pretty much ran everything but the kitchen — handled the front of the house, did books, answered phones, took care of the wine list and worked the door.

Symon: The one that's the least amount of work is really working the door. It gets to be a little more fun, interacting with the customers. That doesn't really feel like work to me.

RH: Your restaurants are known for their thoughtful wine lists. How did you get up to speed on wine?

Symon: I learned mostly by drinking! My interest really started at Players, when the owner let me sit in with the sales people to taste. Then I got interested in the geography. It kind of evolved from there.

RH: Similarly, you have drawn praise for your sense of style. You've built a reputation for creating sophisticated and comfortable urban settings.

Symon: We always work with the same designer, and at the beginning of a project we sit down and I tell him what I think it should look like, what colors are in my head. Then we go back and take a look at the plan and try to imagine how it will function. We try to envision a place that's full of people instead of empty. It just evolves from there down to the finishing design touches, the “accessories,” like the the menu design, candleholders or uniforms.

I think I'd be a good personal shopper. I have something in my mind and I'm in and out. I can see things really fast and pick them out — especially when it's other people's money!

RH: How is opening in a hotel different from your past experience?

Symon: It's a complete other beast working in a hotel. I believe first of all that the restaurant itself has to keep pace with the hotel--it has to somehow look like the lobby and the rooms, but at the same time it's important to keep its own identity. It's sort of a fine line.

Also, because it's in a new city, I don't know where anything is. The liquor laws are different; I don't have relationships with the wine reps; I'm learning where the restaurant supply stores are. I can't just run out if we're low on something.

RH: How has Michael's Iron Chef celebrity affected the business? Is there an upside and a downside to it?

Symon: There's definitely more upside. TV is very powerful — more than I would ever have thought. It's definitely increased business, and it gives you a much broader audience. People come from out of town just to come to the restaurant — it's brought in a lot of people who would not have come to Cleveland for any other reason.

RH: What's next for you and your partners? I've heard rumors about Las Vegas and St. Louis….

Symon: Vegas is something we would always love to do, but I think it's important to do some of these corporate projects that need a little more infrastructure (like the Westin Detroit project) first. We can't be everywhere at once. That's been the hardest thing: to pull away and let people who we think are capable take care of the day-to-day things.

With Vegas, you really have to be on your “A” game and have good management in place.

RH: Where do you see yourselves 10 years from now?

Symon: I hope we'll have some busy, successful restaurants and not be taking on any new ones. Michael's dream has always been to have a little place were I would work the front and he would work the back, maybe six tiny tables, with great wines.