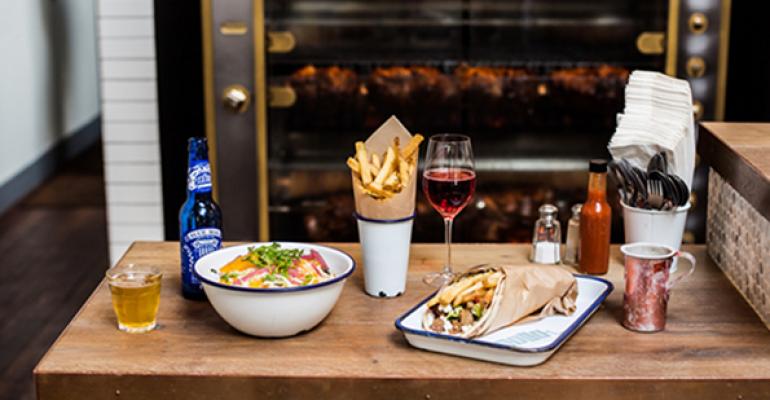 Fine-dining chefs have reinvented burgers, pizza and grilled cheese sandwiches. Now Charles Bililies is having a go at elevating the humble sandwich known as a gyro—or "souvlaki" in Greece.

Bililies is the owner and founder of the San Francisco restaurant Souvla, a sandwich and wine bar designed to carve out a niche he calls “fine casual.”

On the menu is a simple selection of souvlaki sandwiches and salads made with a choice of four proteins: naturally raised rotisserie grilled pork shoulder, lamb or chicken, along with a vegetarian white sweet potato option.

On the side are Greek-style fries spiked with mizithra cheese, oregano and sea salt; succulent potatoes cooked in the meat juices; salad or soup.

Beverages are all Greek, from the sparkling water to a selection of wine and beer, which Bililies says offer food-friendly quality at a value price.

For dessert is frozen Greek yogurt with toppings like olive oil and salt, sour cherry preserves or baklava crumble.

The design of the 45-seat restaurant, tucked neatly into only 1,000 square feet, blurs the line between limited- and full-service dining.

The first visual is the row of eight spits on which the meat is slowly roasting. Guests order at the counter, but food is delivered to tables, with bussers cleaning up. There’s no menu board or walking the line, in the style of a Chipotle Mexican Grill.

“Souvla can be a lot of things to a lot of different people,” says Bililies. “It can be a quick and bustling lunch spot, and we do an awful lot of to-go and now delivery as well. But it can also be your go-to dinner spot, with the lights down and the wine aspect. It’s nice enough that you can bring a date.”

The restaurant, located in San Francisco’s Hayes Valley neighborhood, has been a hit.

With degrees in culinary arts from Johnson & Wales University and hospitality management from Cornell University, Bililies worked earlier in his career as culinary assistant to chef Thomas Keller at The French Laundry and later as dining room manager for Keller’s Bouchon Bistro.

He moved on to work for chef Michael Mina in San Francisco, helping to open the first RN74 and later becoming the restaurant’s assistant general manager.

A Greek-American, Bililies also comes from a restaurant family. The vintage copper pots that decorate Souvla came from his grandfather’s restaurant in Boston.

Coming from the fine-dining world, Souvla borrows the “standards and approaches and thought processes” that tend to support higher-end menus and brings them into the casual realm, Bililies says.

It’s a concept he hopes to be able to replicate. Bililies is looking for a second location and plans to expand in the San Francisco Bay area and possibly beyond.

“We’ve had tremendous success with the first store and it has far exceeded anyone’s expectations from a performance standpoint,” he says. “Now the plan is to grow organically and naturally.”