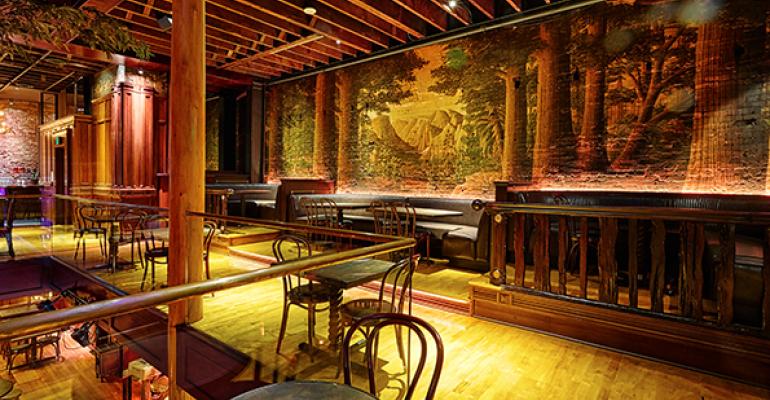 After a five-year, $10 million top-to-bottom renovation, the 80-year-old Clifton’s Cafeteria reopened last week, as reimagined by a history-loving hospitality entrepreneur.

The legendary 47,000-square-foot Clifton’s Cafeteria, founded in 1935 by Clifford Clinton, was known for its whimsical décor and sheer size, serving up to 15,000 per day in its heyday. The venue was bought in 2010 by Andrew Meieran, a preservationist turned Hollywood writer/director who also created the Los Angeles nightclub The Edison in a space that once housed the city’s first private power plant.

With Clifton’s, Meieran has attempted to recapture the cafeteria’s former glory, but he has also added much that is new, opening up the multi-level space with the addition of five new bar areas.

At the center of the building is a three-story atrium that encloses a 40-foot simulated redwood tree that Meieran had made to fit the forest-oasis theme that was key to the original décor.

The restaurant was reworked with input from the Los Angeles Conservancy and the Natural History Museum of Los Angeles. Meieran’s aim was to capture the authenticity of the somewhat bizarre space, which is believed to have inspired Walt Disney and science fiction pioneers Ray Bradbury and Robert A. Heinlein, as well as Beat Generation journalist and poet Jack Kerouac.

Artifacts include things like dinosaur fossil eggs, massive geodes and wildlife displays, including a nine-foot preserved bison. There’s a waterfall on one floor, and Bradbury’s favorite corner booth has been lovingly restored with paraphernalia donated by his family on wooden shelves above the table.

“Clifton’s Cafeteria’s restoration embodies everything I hold dear,” said Meieran in a statement. “It embraces historic preservation, conservation, intergenerational wonder, California’s natural and cultural history and food and beverage. I greatly respect Clifton’s Cafeteria’s legacy and have a unique vision of bringing that into the future so that it lasts another 80 years.”

The renovation, however, was a massive undertaking, says Barbara Jacobs, president of Kinetescape Inc., which owns Clifton’s Cafeteria and The Edison.

“It was a much more extensive project than anticipated,” she says. “The building was in great disrepair.”

Because the Clinton family had preserved so much of the eclectic décor over the years, it was a matter of peeling back the layers, she says.

So far, feedback has been positive.

“On opening day we served 4,000 people–1,400 in the first two hours,” says Jacobs. “People seem pretty happy. The overall comments from guests were how they feel like it’s Clifton’s, that the authenticity had been sustained.”

Open last week were the main cafeteria and bakery, which is helmed by former Malibu Inn chef Jason Fullilove, as executive chef, and joined by pastry chef Michael Luna.

On the menu is a lineup of classic dishes and desserts–including the much-loved Jell-O–but made contemporary with upgraded ingredients like fresh farm-to-table vegetables, rather than the canned used back in the day at the restaurant, says Jacobs.

As it did in the past, the cafeteria features several carving stations, with roast beef, turkey, ham and sides like mashed potatoes, a salad and soup section, and an area with made-to-order dishes, like bison burgers, ahi tuna sandwiches and fish and chips.

A new addition is a pizza oven, and at the front of the restaurant is a pastry counter with a full range of desserts.

A three-course special is $12, while most guests will spend roughly $15 to $20 with a drink, says Jacobs.

At the entry is the Grotto and Cave, a retail space lined with historic photos and featuring curated edibles from California.

Another bar area called Monarch will be more of a neighborhood hangout recreated as a 1930s soda fountain.

Later this year, Meieran will reveal reimagined spaces that will open on the floors Clifton’s previously used for offices and back-of-the-house support.

The Gothic Bar, for example, will debut, featuring a former church alter adorned with a 250-pound meteorite.

In the basement will be Shadowbox, a speakeasy with a high-end mixology program and botanical theme, found behind hidden doorways.

The art deco Map Room, inspired by the Golden Age of travel, will lead into the Pacific Seas, described as 1930s-Polynesia-meets-1950s-tiki, with a mahogany Chris Craft boat as the centerpiece.

On an upper floor will be Treetops Bar, offering the experience of living at the redwood forest canopy, with performances by aerialists on the limbs of the 40-foot-tree. Jacobs says a steakhouse is planned for Treetops down the road.

Guests can wander among the themed areas or take their food to eat in one of the bars. In a few weeks, Clifton’s will be open 24 hours, which is unusual in downtown Los Angeles, opening the venue up to after-hours parties and residents looking for a late night/early morning bite, says Jacobs.

The restaurant has a staff of 250 and is designed for volume.

The original Clifton’s was known as a restaurant where those who couldn’t afford to pay could still get a good meal, and Meieran has continued that legacy with a focus on social responsibility.

About 10 percent of employees have been hired through downtown second-chance outreach programs, like Midnight Mission and Chrysalis.

“I did this at The Edison and we had great success with hiring through sober living and second-chance programs,” says Jacobs. “Once you walk in the door, you’re only judged by what you do in the building. I believe deeply that people want to do the right thing if given the opportunity."