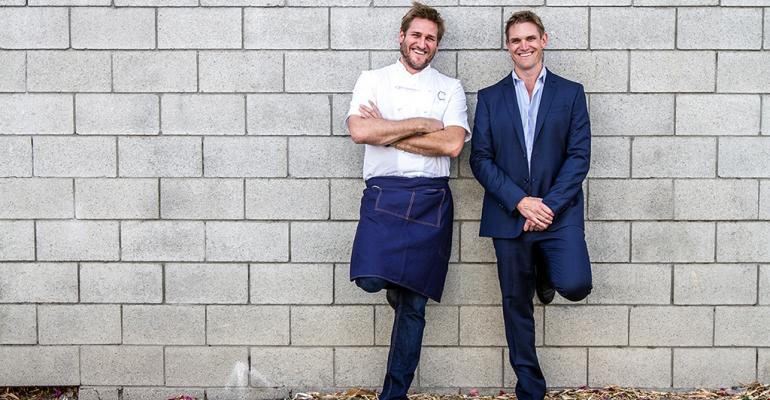 Los Angeles chef Curtis Stone is expanding as a family operation with the recent opening of the new concept Gwen.

The 80-seat restaurant was developed in partnership with his older brother, Luke Stone, who serves as co-owner and g.m.

Both raised in Melbourne, Australia, Curtis is known for his tiny 25-seat-restaurant Maude in Beverly Hills and many television appearances. Luke’s background is in the floral industry.

The two brothers have been talking about doing a restaurant together for years, Luke says. But with both building families, the timing never seemed right.

That is, until last year, when the two found a stunning Hollywood location that has become a handsome art deco-inspired venue they named for their maternal grandmother Gwen. Luke moved his family to Los Angeles and worked with Curtis at Maude for about 18 months as Gwen came to fruition.

At Gwen, it’s all about meat.

At the front of the dinner-only restaurant is a European-style retail butcher shop, with daytime hours. The shop area includes a dry-aging room and curing room.

The shop is designed to spotlight premium animal proteins from small, boutique farms in the U.S. and around the world—from Scottish grouse to pasture-raised Mangalitsa pork from California. Gwen, for example, is the sole distributor of Australian Blackmore wagyu beef, a richly marbled product that will be for sale through the butcher shop but also on the menu.

Also available is house-made charcuterie, with products ranging from terrines, pates, rillettes and head cheese, along with dry-cured pancetta, culatello and salami. Patrons of the shop can also grab a sandwich or a coffee, featuring Australian roaster St. Ali.

“We didn’t want it to be a gimmick,” says Luke of the butcher shop. “We really wanted to create a world-class butcher shop that would stand on its own two feet.”

The Stone brothers have brought in as butchers Alex Jermasek, formerly of meat-focused Belcampo in Los Angeles, and Daniel Roderfeld, who previously led the meat department at Eataly Chicago. And Luke says both he and Curtis worked in butcher shops when they were young.

Curtis went on to pursue a career in food, working for famed chefs like Marco Pierre White in London before being pulled into the food TV world in the U.S., from Top Chef Masters to MasterChef. Luke, meanwhile, stayed in Melbourne and went into accounting, later buying his mother’s flower business, which he grew and still operates.

An opener of charcuterie will be followed by a “Maude-esque” composed salad, then a house-made pasta, the main course and dessert. Dishes are cookied primarily over almond wood in a glass-lined fire pit that serves as a visual centerpoint to the exhibition kitchen and dining room. But the kitchen also has a wood-burning oven.

Non-meat-eaters can be accommodated, Luke says, “But because it’s a butcher shop and meat-focused restaurant, I’m not sure how many vegetarians we’ll get in. But we have beautiful vegetables out of that wood-fired oven.”

At the bar or a more-intimate wine room on the mezzanine, guests who don’t want to invest in a five-course meal can grab a more casual bite with a cocktail.

Luke says the brothers are aiming for “fine dining without the stuffiness.”

Cooking over wood can evoke a more rustic atmosphere, but Gwen promises to offer an elevated experience with attention to service, he adds.

“We have all the rules you would find in any of the finest fine-dining restaurants in terms of our steps of service,” says Luke. “When we come to the table, the synchronized way we serve our plates, the way we pour our wines, the way we clear our tables: All of those rules are applied here and we’ve trained our guys really hard to be sure they’re at the level we want them.”

The restaurant will also take an 18-percent service charge, which will allow for higher wages for both front- and back-of-the-house.“We want to attract staff that are passionate industry professionals,” he says. “My goal is to have our staff be the best paid in the city because they are the best in the city.”

The brothers are open to doing more restaurants, though Luke notes there are no immediate plans.