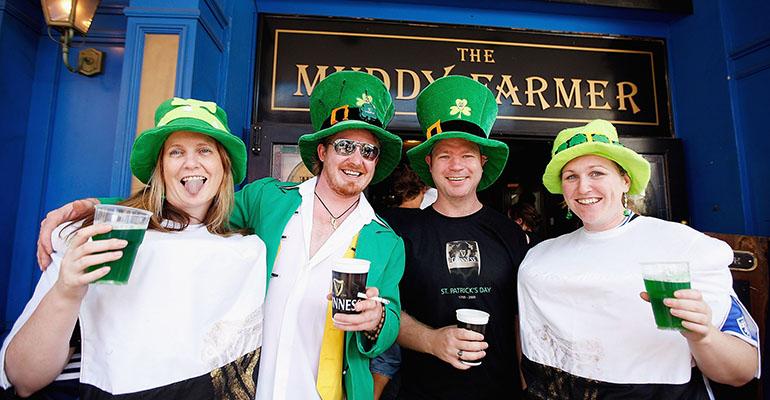 <p>It&#39;s no surprise that St. Patrick&#39;s Day brings out the beer drinker in many Americans, Irish or not.</p>
Food & Drink>Drink Trends

What operators can learn from March beer sales

Restaurant operators don’t need precision analytics to know they sell an ocean of beer—Guinness yes, but other brands, too—on St. Patrick’s Day. But consumption data captured by draft beer management firm SteadyServ Technologies is still worth a look, especially now that an additive that will allow operators to instantly transform low-end suds into craft-worthy beer is about to hit the market.

SteadyServ’s  month-by-month draft beer rankings for 2016 show that it’s a Bud Light and Miller Lite world. Those two brands were No.1 and No. 2 in both January and February of this year. They sold even better in March, a huge beer drinking month overall. Bud Light sold 11,152 ounces per day across SteadyServ’s wide-ranging client base, whose members collectively poured 4.51 million ounces of draft beer in March. Miller Lite consumption averaged 9,326 ounces per day during this 31-day period.

Consumption spiked on March 17. SteadyServ’s customers sold 442,174.73 ounces of beer on St. Patrick’s Day this year. The numbers show that 152.5 percent more draft beer was sold on March 17 this year than on a typical Thursday in March. Guinness consumption rose 819 percent on the day. In Atlanta and Columbus, Guinness accounted for 38 percent of all beer consumed. Austin beer drinkers collectively drank a keg of Guinness an hour.

The top-selling craft product during this period was Bell’s Two-Hearted Ale. It was the No. 5 brew in March (7,579 ounces poured per day) after ranking No 3 in February and No. 5 in January. New Belgium Fat Tire is the second-best selling craft brew so far in 2016.

Craft brews remain a dominant trend. Their share of market could grow even greater, but lofty price points limit their sales. That’s a problem Mad Hops, a maker of flavor concentrate drops that transform inexpensive brews into craft-worthy beer, hopes to address. The company is currently running a Kickstarter campaign to fund its first round of mass production.

Mad Hops positions itself this way: “The craft beer industry is exploding as consumers demand more variety and complexity in their brews. However, beer drinkers on a budget have been left behind…. until now. Mad Hops Flavored Brew Drops deliver a satisfying craft beer experience at a fraction of the price.

“Two years in product development, Mad Hops uses craft beer ingredients like hop oils, bittering and malt to elevate the base beer flavor and then mixes in some popular flavorings to upgrade the color, aroma and taste.”

The technology is simple enough. It works the same as MiO, the water enhancer flavor mix that enables consumers to customize nonalcoholic beverages. A thrift-driven restaurant bar patron or a bartender just squirts several drops of the Mad Hops flavoring liquid into a 12-ounce glass of beer and the result, backers say, is transformative. The list of available flavors includes Pale Ale, Mexican Lime, Apple Amber, Cherry Wheat and Wild Blueberry.

Come next St. Patrick’s Day, adding a few drops of Mad Hops Irish Porter flavor concentrate to an inexpensive beer such as PBR will allow any bar to supply Irish beer to revelers on demand. The current interest in beer-based cocktails may also drive interest in this flavor-altering product.

Mad Hops is just a few days into its KickStarter campaign and has already drawn solid support. The company hopes to start production soon and ship product in July. In the meantime, if you want to sell a lot of beer in 2017, be sure to have plenty of authentic Irish beer on tap when next March rolls around.