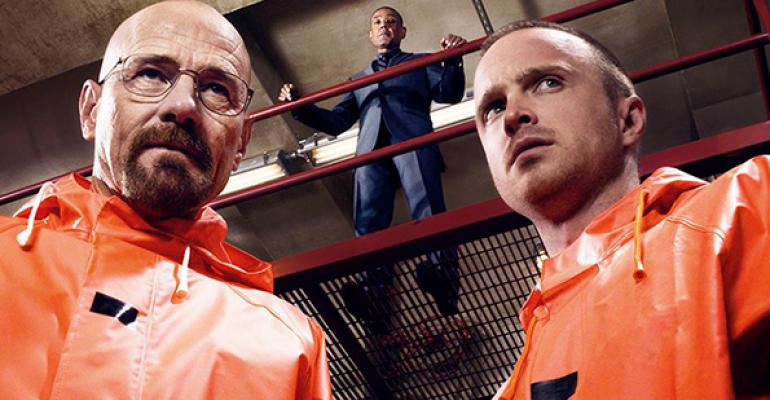 There won’t be any more new episodes of Breaking Bad coming out, so binge-watching old ones is about all that’s left for diehard fans to do. But binge-drinking might be an option, too, with the opening of the Breaking Bad-themed ABQ, a pop-up cocktail lounge housed in an RV just like the one Walt and Jesse used as their mobile meth lab. There’s a way other restaurant bars can get in on the action, too.

ABQ is set to open on July 24, but we already know how business is going to be. Named for Breaking Bad’s hometown Albuquerque despite being located in London, England, the bar-on-wheels sold out the first two months of its projected three-month run in just three days. For roughly $34 U.S. at current exchange rates, 20 patrons at a time get to spend two hours inside the RV’s lab. Everyone gets two cocktails; a lucky few get to “cook” some drinks, too.

ABQ will serve three groups of ticket holders per day. So far, nearly 29,000 people have signed up to be on the list for tickets. The next batch, covering the third month of the pop-up’s operation, goes on sale soon. The run could be extended to a fourth month.

What does Sony Pictures Television, owner of Breaking Bad, think about ABQ? The company hasn’t said anything yet, perhaps because it sees a liquor marketing opportunity among the show’s fan base, too. Here’s the announcement.

On the show, Heisenberg was lead character Walter White’s alias for his drug business persona. Breaking Bad creator and executive producer Vince Gilligan is behind this product all the way.

“The Dude had his White Russians, the Blues Brothers had their Night Train… and now Heisenberg has his very own Blue Ice Vodka!” he says. “I’m counting on our fans to use it in the creation of a great many delicious cocktails. I’m getting thirsty just thinking about it.”

If you want to serve Breaking Bad-themed cocktails in your restaurant’s bar, this would be one way to do it.

But that’s not the only foodservice-related spinoff that holds appeal for Gilligan. When asked if he had ever thought of doing something with Los Pollos Hermanos, the fictional 14-unit quick-service chicken restaurant owned by arch-villain Gus Fring and scene of many tense meetings between Fring and Walter White, here’s what Gilligan said.

“Believe it or not...there is talk of a Pollos Hermanos becoming a real restaurant. This is not an idea that I generated personally. But it's one that's been presented to me, through the good folks at Sony, and the idea came to them from a businessman who has an interest in doing just that ... Speaking for myself, I'd love to see that happen!”

Seems like a long shot. But so did ABQ before people started clamoring for tickets.