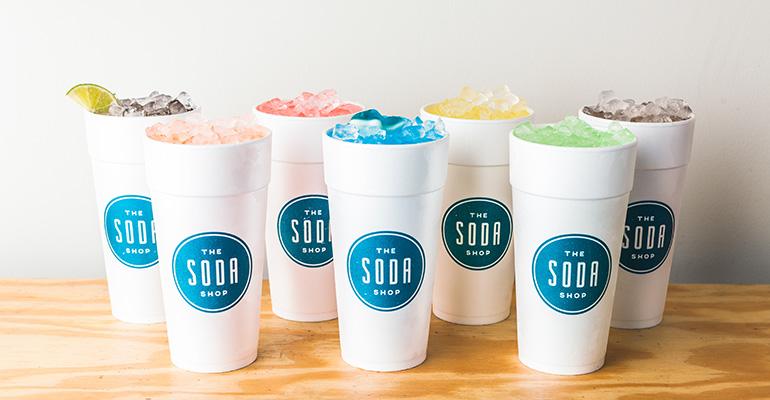 Putting the fizz back in pop

For more than a decade, carbonated soft drinks have been losing their fizz as diners have continued to pull back on ordering the sugary beverages.

To bring soda sales back to life, a growing number of restaurants are taking a cue from the craft beer and craft cocktail movements and are elevating soda, concocting house-made carbonated drinks using fresh ingredients and often unexpected combinations.

“More operators are putting these [beverages] on their menus,” said Caleb Bryant, senior foodservice analyst for market research firm Mintel. “There’s a need to elevate soda to something more premium to appeal to modern tastes.”

According to the most recent research from Mintel, in the fourth quarter of 2016 “house-made” as modifier for soda on restaurant menus increased 76 percent over the year prior. “Restaurants are a great channel for premium sodas because restaurants want to have ways to provide uniqueness and a point of differentiation,” said Gary Hemphill, managing director and chief operating officer for consulting and research firm Beverage Marketing Corporation. “Having different soda options would be one way to do that.”
The premium beverage movement hit a hiccup during the recession, said Hemphill. But the trend is continuing as some consumers — mostly those with disposable income — are again ready to explore new products to treat themselves. However, Hemphill noted that premium soda is still a small part of the industry, accounting for only about 1 percent of market share.

“There’s an opportunity here,” added Hemphill. “The question is how big."

Restaurants across the country are seizing the opportunity. Here are some examples of restaurants innovating with creative carbonated beverages.

Beverage director Taha Ismail is responsible for the robust selection of house-made sodas on the menu at chef Mike Isabella’s Washington, D.C.-area restaurants, including Arroz, Kapnos and G.

“Instead of selling Coca-Cola you can sell a bit more,” said Ismail. “We are putting a lot of love into [our sodas], treating them like a cocktail.” Among the inventive offerings are sodas in flavors such as blackberry lavender, rhubarb grapefruit, lemongrass-pineapple and watermelon-tarragon. Ismail uses the same fresh ingredients and techniques to make these sodas as he would in crafting a cocktail, and he said they sell extremely well, especially at lunchtime and happy hour.

Making fresh-to-order sodas could be an operational nightmare, but Ismail said it isn’t when you put the right systems in place. For example, each of Isabella’s restaurants have a staffer who comes in several times a week just to make fresh juices and syrups for the various beverage programs, so all the bartenders need do is mix and carbonate to order.

Bryan Dayton began experimenting with craft sodas back in 2008, two years before opening Oak at Fourteenth, his locally sourced New American restaurant in Boulder, Colo. Now, his house-made and bottled sodas are available at all of his restaurants, including Acorn and Brider in Denver.

Dayton, who is co-owner and beverage director of the three concepts, always offers a house-made root beer, a ginger beer and a seasonal concoction. Right now, the seasonal soda is blood orange, while other flavors have included kumquat-tarragon and cucumber-basil. For the seasonal selections, Dayton starts with fresh, seasonal ingredients and then uses a keg-based carbonation system to give them the necessary fizz before bottling. The sodas do double duty on the restaurant’s cocktail menu, serving as mixers in high-alcohol cocktails, low-alcohol cocktails and non-alcoholic mocktails.

The culinary team at the Pittsburgh, Pa.-based Mediterranean restaurant Cure, concocts carbonated sodas that are influenced by what’s happening in the kitchen and that are true to the concept’s focus on fresh, local and seasonal ingredients.

Martina DiBattista, Cure’s general manager, said sodas are given the same care as cocktails. “Not an after thought at all.” Cure’s house-made soda, which changes monthly, is currently peach-ginger. The sweet-and-spicy soda is made with last summer’s peaches that were harvested at their peak and then preserved, spiced with ginger and herbs de Provence, all cooked down into a syrup then topped with local seltzer.

Previously, the featured soda was paw paw, sarsaparilla and coffee, which was made by reducing paw paw, a banana-meets-mango flavored fruit native to the Eastern U.S., sarsaparilla, espresso and cocoa nibs into a syrup, which is then mixed with a touch of sugar, lemon and seltzer. DiBattista described the unusual combination’s flavor profile as a “banana-y root beer float” and said it was “pretty intense, but delicious.”

For the next soda, the culinary team is currently experimenting with Concord grapes and sage.

“It’s one of the aspects of the menu that we have a lot of fun with,” said DiBattista. “They sell really well.”

In addition to restaurants making their own sodas, a handful of newer concepts have emerged that are focused on serving carbonated drinks that are made by mixing pre-packed syrups and purees and sometimes fresh fruits with traditional sodas, like Coke, Dr. Pepper or Mountain Dew.

The newest example is The Soda Shop, a fountain drink concept that opened its first location in Gilbert, Ariz., in 2015 and a second in Mesa, Ariz., about a year later. Customers can either come inside the shop or use the drive-thru to purchase drinks with names like Fruit Ninja (Sprite, strawberry, peach, watermelon), Big Booty Judy (Coke, raspberry, vanilla and fresh lime) and Guava Have It (Mountain Dew, strawberry, guava and coconut cream). They can also customize their drink using more than 30 different flavors, purees, creams and fresh fruits, as well as order a selection of concretes and cookies.

“America loves soda,” said Dylan Roeder, co-owner of The Soda Shop. “You can get soda anywhere, but something about the fun names, the unique flavors … people love the experience.”

And Roeder is hoping even more people will come to love The Soda Shop, as the fledgling concept, which recently was acquired by American Fork, Utah-based Four Foods Group, is expecting to add four new locations this year and an additional six to seven locations in 2018.

Photos courtesy of The Soda Shop, Cure, Oak at Fourteenth, and Kapnos