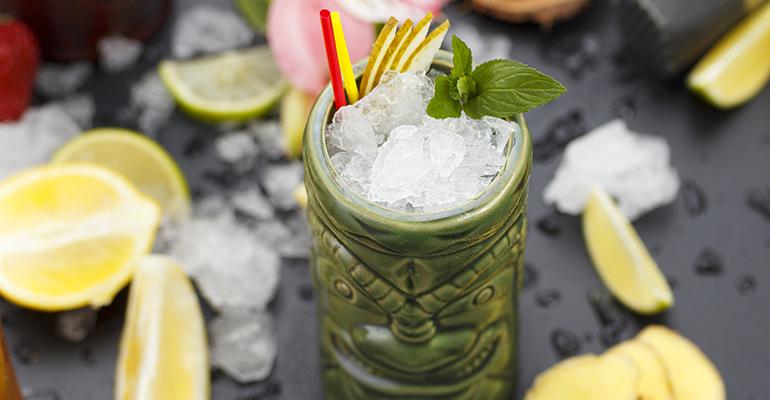 A primer on tiki culture

David Flaherty has more than 20 years' experience in the hospitality industry and is the marketing director for the Washington State Wine Commission. This article does not necessarily reflect the opinions of the editors or management of Nation’s Restaurant News.

Of all the places I traveled to as a kid, the Enchanted Tiki Room at Disneyland still sticks with me vividly.

I remember the robotic birds that chirped from all corners, the steaminess of the jungle, the methodical pounding of drums, and the Polynesian god heads that looked down on us with a mix of anger and curiosity. It was otherworldly, strangely alluring and a bit terrifying.

I’m not alone: Americans have been fascinated by tiki culture for quite some time, and despite ups and downs in popularity, serious tiki cocktail joints continue to open around the country to immediate fandom.

Tiki culture swept through the U.S. after World War II, but it helps to go back a little bit further and look at the two men who are credited with starting the tiki-themed bar craze in America. In 1934, Ernest Raymond Beaumont-Gantt opened the first Polynesian-themed restaurant/bar in Hollywood named Don the Beachcomber. Later that same year, Victor Bergeron opened Trader Vic’s in San Francisco.

Both men were inspired by their travels through the South Pacific and became enamored of the exotic rums they came across. In 1944, “Trader” Vic Bergeron is said to have created the Mai Tai, but Ernest (aka “Donn Beach”) is credited with first adding flavored syrups and fresh fruit juices to make exotic rum punches, both of which are staples on any tiki-themed cocktail menu. Trader Vic’s continues to expand and now numbers nearly 20 locations around the world, including outposts in Japan, England, Saudi Arabia, Bahrain, Germany and the United Arab Emirates.

“Both started their businesses at a time in American history when people were looking for ways to escape,” said Sother Teague, beverage director at Amor y Amargo in New York City, and co-host of “The Speakeasy” on Heritage Radio. “They were like an oasis. If you think about it, all bars are an escape from the day-to-day, but the dial is turned way up at a tiki bar. Instead of just having a drink, you get an experience beyond the glass.”

Equally known for their warm hospitality and flavorful food, the decor of tiki bars can span the gamut of kitsch, including everything from bamboo fixtures, thatched roofs and wooden masks, to giant aquariums stocked with skilled swimmers in mermaid garb. But at the heart of show are the cocktails.

“If you're speaking directly to tradition, rum is the obvious requirement,” Teague said. “Followed closely by fresh juices like pineapple and coconut, as well as flavored syrups using baking spices like cinnamon and anise. Then, beyond the liquids, it's all about the glassware, the garnish and sometimes even fire.”

But staff can’t get sloppy with their proportions, despite the seemingly carefree attitude of the room.

“All too often, bartenders make tiki drinks that meet the visual requirements, but are far out of balance,” Teague said. “A Zombie [cocktail], for instance, can be strong, but it's balanced. And a Missionary's Downfall [cocktail] can be sweet, but balanced, too.”

In Seattle, Anu Apte and Chris Elford recently jumped into the fray by opening Navy Strength, a bar that expands the tiki theme in a broader direction.

"We split our menu three ways between tiki, tropical, and travel," Elford said. "The canon of tiki drinks has already been written and sealed — they're classics created by a handful of individuals in the ’30s, ’40s, and ’50s. But the reason we chose to do it now in Seattle is that the age of cocktail people taking themselves too seriously is over. People want to have fun with it again, bartenders and drinkers alike."

The continued popularity of these often strong and lip-smackingly delicious recipes means that many bars and restaurants have begun incorporating at least one tiki drink into their offerings, with the most popular being the Mai Tai.

While there are countless variations on the Mai Tai, the drink is made by blending a number of different rums, and then shaking the mixture with fresh lime juice, orgeat syrup, and Cointreau. The high number of ingredients means efficiencies can be found that ensure fast service and quality control.

“Since the Mai Tai has five spirits in it that are all half-ounce pours and non-perishable, they can be mixed in advance in equal parts and stored in an empty liquor bottle, known colloquially as a 'cheater,’” Teague said. “The bartender is then only responsible for a single pour of 2.5 ounces per drink, allowing for high speed and less room for errors. Then just add the orgeat and lime and what was once a seven-bottle pick-up is now only three. Efficient as well as cost-effective.”

The quality level continues to rise, as serious bartenders work their craft to better the guest experience. Whether it's cold-pressing fresh juices or sourcing exotic fruits and spices, the ethos of the tiki bar comes down to creating a culture of escapism.

Forbidden Island in Alameda, Calif., for instance, touts itself as a “retro-oasis in the desert of your busy modern day,” while Three Dots and a Dash in Chicago encourages guests to “surrender all your cares and let us whisk you away onto a rum-soaked tropical excursion.”

I think the tiki Gods would approve, assuming their heads haven’t been shrunken first.

June 26, 2017: This story has been updated with information about Seattle tiki bar Navy Strength.