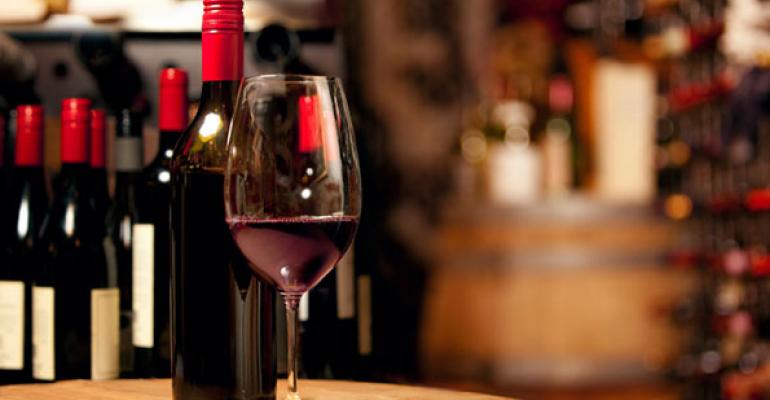 Operators already know customers will order microbrews and handcrafted cocktails from their bars at a torrid clip. But hot as those two categories are, wine is where restaurants may be able to grow alcoholic beverage revenue the most. New data from Technomic shows that while customers have indeed been drinking more beer and spirits while away from home over the past two years, their wine consumption has actually risen at a faster clip.

Looking at the data from the opposite perspective tells a similar story. Twenty-two percent of consumers told Technomic they drink fewer spirits than they did two years ago. Seventeen percent order less beer. Only 12 percent have cut back on wine.

Either way you look at it, wine looks like the alcoholic beverage category where restaurant operators have the good boost sales. Overall, the research firm predicts a 3.1 percent increase in wine purchases this year, the highest rate in four years.

"Consumers today are intrigued by wine, and one-third report ordering wine more often in restaurants and bars,” observes Donna Hood Crecca, senior director at Technomic. “The marketplace is so crowded with brands, varietals and styles, however, that it can be overwhelming,” she cautions.

Which may be why Technomic found that most consumers tend to stick with a name they know when ordering wine. Its research found that 70 percent of consumers are likely to order the same brand of wine in a restaurant or bar that they purchase at retail.

This practice could take some of guesswork out of fine-tuning your restaurant’s wine list. Try asking your wine salesman what brands sell best in wine stores in your area. Then add a couple of them to your list to see if your customers behave as Technomic suggests.

And you might look toward the upper end of the price spectrum when you’re deciding which wines to add. Wine industry lender Silicon Valley Bank’s 2015 State of the Wine Industry report predicts consumers will spring for more costly wines, most likely red ones, this year.

The bank provides funding to companies that do business in many parts of the wine industry, giving it a perspective few other forecasters enjoy. Here are some of its predictions for 2015:

• Starting in mid-2014, wines priced above $20 a bottle broke out strongly higher. “Trading up” is a clear trend again. Red wines in particular showed the strongest growth. We expect that to continue throughout 2015.

• Wines priced below $9 per bottle performed poorly both on and off premise in 2014. The poor performance is likely to continue into 2015.

• Growth in sales of wines priced above $20 was driven by accelerating volume with little in the way of price increases getting through to the consumer.

• After finishing the year at the top end of our predicted growth in sales of 6–10 percent, we are predicting a breakout year of growth in the fine wine category in the 14–18 percent range in 2015.

Which restaurant customers will be spring for these more costly wines? It’s Gen Xers, not Millennials. “We can’t stress more emphatically that one day, Millennials will be at the center of fine wine sales,” says Rob McMillan, executive v.p. and founder of the bank’s wine division. “But the reality is — no matter what a generation is called, the most active buyers of fine wine and luxury goods will continue to be in the 35- to 55-year age group. The younger generation is just now entering an age where they can participate in a more meaningful way. Today, the largest consuming cohort is the Boomers (49-66 years-olds), and the cohort with the greatest immediate growth opportunity is Gen X (37-48 year- olds). That’s where wealth is centered, and that’s where income supports purchasing at higher prices.”

If your restaurant attracts a middle-aged and up demographic, adjust your wine list accordingly.