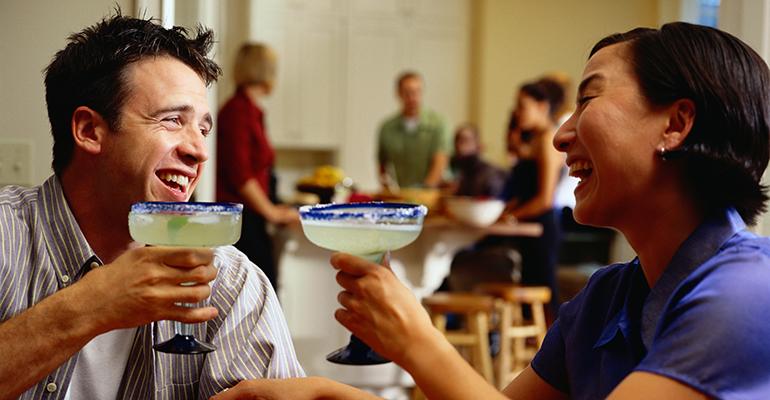 <p>Regardless of the cuisine, margaritas seem to have universal appeal among Americans.</p>
Food & Drink>Drink Trends

We’ve said it before, and we’ll say it again: If you don’t have a margarita on your menu, you should.

According to the first on-premises consumer survey of the U.S. market by Nielsen CGA, 60 percent of the 15,000 consumers participating prefer that frozen concoction over other cocktails. It’s one of a many insights designed to provide a comprehensive look into America's eating and drinking habits in restaurants and bars.

Other selected findings from the study:

• 23 percent of the U.S. population have drunk a cocktail away from home in the last three months.

• The margarita (60 percent) is the most popular cocktail in the U.S., followed by the daiquiri (44 percent), piña colada (36 percent), Long Island iced tea (33 percent) and mojito (29 percent). Recent figures from Datassential support the popularity of margaritas.

• 48 percent of consumers believe that named liquor brands on a menu are very important or important when choosing a cocktail.

• Chilli's customers are more likely to try a margarita than the U.S. average (67 vs. 60 percent).

• Buffalo Wild Wings guests consumers are more likely to try a tequila sunrise than the U.S. average (34 vs. 27 percent)

• T.G.I. Fridays patrons have a better-than-average chance of choosing a mojito (41 vs. 33 percent).

Americans like their boozy brunches: About 6 in 10 say they are likely to imbibe at that meal occasion. Of those who drink, mimosas (45 percent), Bloody Marys (36 percent) and champagne cocktails (27 percent) are the most popular choices.

What are Americans willing to shell out for their drinks? Survey participants said they would pay just shy of $9 for a standard cocktail, 25 percent more for one crafted with premium spirits. The overall average was $11.

The Nielsen CGA on-premise consumer survey was conducted online, in English, within the U.S. between March 20 and April 7, 2016, among 15,000 adults (aged 21 and over) who had visited an on-premise establishment at least once in the last three months during the time of the survey.

Nielsen CGA is a joint venture between the research firm and CGA, a marketing information company. Complete survey results are available to Nielsen clients.