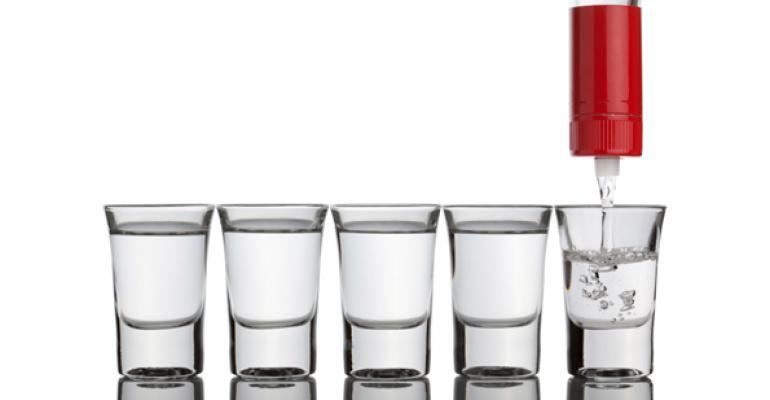 Vodka is available in an ever-widening array of flavors ranging from bacon to bubblegum and beyond. But a new push for quinoa vodka—made from, not flavored with, the renowned superfood grain—gives operators the chance to put a high-minded spin on their cocktail program. When you or your mixologist wants to create a new signature drink, superfood-themed cocktails could be a good place to start.

Fair Spirits, the maker of quinoa vodka, isn’t the first company to market a superfood-themed vodka. Dutch vodka maker Van Gogh already plays the superfoods angle with its pomegranate and acai-blueberry flavored vodkas. (You can also find some cool cocktail recipes for them.) The company uses a variety of grains—wheat, corn and barley—to produce its small-batch vodkas.

Fair Spirits differs in that its vodka is distilled from quinoa seeds. The company sources raw quinoa from a 1,200-grower association located in Bolivia’s Altiplano region, then transports the seeds from South America to its home base in the Cognac region of France for production.

The finished product doesn’t taste like quinoa. Tasting notes describe the nose as “quite mineral—cereals and citrus fruits,” its palate being “balanced between green and fruit notes” and its finish as “hot and lasting—almond milk.” In Europe, a bottle goes for 38 euros (roughly US$51.)

Fair’s quinoa vodka isn’t completely brand new. It’s been on the market since 2009, and has won medals in spirit-tasting contests including one put on by Chicago’s Beverage Tasting Institute in 2010 (gold medal) and the 2011 San Francisco World Spirits competition (medaille d’or). It’s undergoing a new marketing push right now to take advantage of three factors:

• the growing popularity of quinoa on U.S. menus;

• the heightened awareness of quinoa as a superfood; and

•  the momentum created by the United Nation’s declaration that 2013 is the “International Year of Quinoa.”

The collective result: a quinoa craze, with prices and supplies fluctuating more than this grain’s various promoters might have hoped. Billed as a “perfect protein,” quinoa contains all essential amino acids, valuable trace elements and vitamins and is gluten-free. No wonder demand for it has grown so fast.

But does that demand extend to cocktails made from quinoa-based vodka, where the nutritional benefits really don’t come into play? That’s what Fair is going to find out. The company’s adherence to fair trade practices certainly adds to the do-the-right-thing halo surrounding this product. Fair says it guarantees higher margins to quinoa producers and donates 2.5 percent of its revenue to the financing of local development programs in the growing area.

We don’t know that every customer who frequents your bar will care that you offer a superfood-cocktail whose purchase aids the indigenous farmers of Bolivia and Peru. But enough of them might if your mixologist can come up with a tasty drink that combines quinoa vodka with other superfood-tinged ingredients.