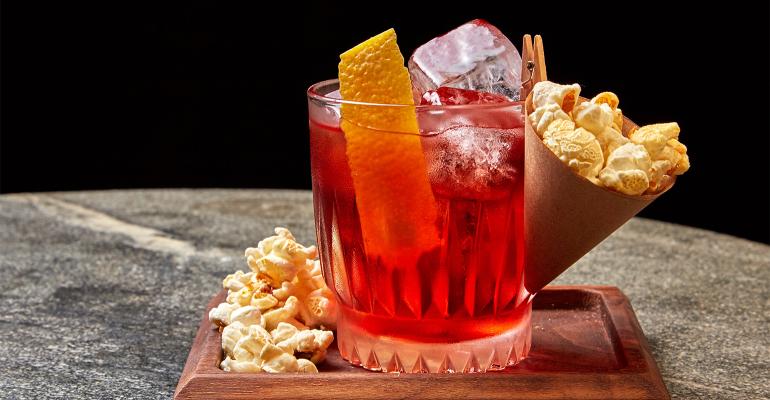 Cocktails paired with a snack add a new dimension to drinking

When customers choose to actually dine in a restaurant rather than order takeout or delivery, they’re often looking to be dazzled a bit — charmed by great service or wowed by a dramatic presentation. Increasingly the people in charge of running beverage programs are meeting those needs by serving cocktails that are more than mere drinks. There’s a bona fide trend of beverages with edible components.

These go beyond the olives in a martini or the occasional over-the-top grilled cheese sandwich on a brunchtime Bloody Mary. Nowadays, little side dishes come paired specifically with the cocktails that were ordered.

“It’s not just about improving the presentation,” he said. “They also add flavor and texture to your drink.”

Guidoni’s version of the cocktail is a bit different from the norm. He adds diced pineapple to vodka and lets it macerate for two days, pushes it all through a strainer several times to blend it together and combines it with vanilla syrup, passion fruit purée and a few dashes of habanero chile tincture. He upgrades the sparkling wine from Prosecco to Champagne.

“So the passion fruit floating in the drink blends with the sweetness coming from the vanilla syrup, the spice component coming from the habanero and of course the freshness of the pineapple-infused vodka. Altogether your experience goes beyond the drink because you have an external ingredient in the passion fruit that you can eat,” he said. By having some fruit, and then a sip of the cocktail and then some Champagne — which he said brings “bakery notes” as well as acidity — “it all becomes a larger experience than just a simple martini.”

Along a similar vein, he embellishes a classic Mojito — rum, sugar, lime juice, soda and mint — with a slice of dehydrated pineapple.

“So you smell the mint, then you eat the pineapple, then you drink the Mojito, and your experience is amplified,” he said.

Another option is the Negroni — gin, sweet vermouth and Campari — served with a popcorn cone clipped to the glass. He tells guests to eat a couple of pieces of popcorn before sipping the drink. “The savoriness and the butter of the popcorn prove to be a great enhancer for the bitterness of the Campari, the sweetness of the vermouth and the floral notes of the gin,” Guidoni said. “This is really talking about more of a three-dimensional liquid experience; the garnish becomes functional to the drink.”

At PS, a speakeasy-style bar in back of a new high-end food shop in New York City’s Hudson Square, bar manager Melissa Brooke has several cocktails with their own side snacks.

Her Exit through the Gift Shop cocktail — named for the bar’s hidden entrance — is a choice of mezcal or bourbon stirred with chocolate tea-infused sweet vermouth, Lustau amontillado sherry and Montenegro amaro poured into a chilled glass with three droplets of black truffle oil in it. It’s accompanied by a side of mushroom jerky, made by shaking sliced portobello mushrooms in a bag with soy oil, coconut amino acids, brown sugar, salt, pepper, garlic powder and other spices and then dehydrating it, adding a savory element that Brooke says enhances the other components.

Her High Tea Negroni, on the other hand, made with gin, sweet vermouth, Faccia Brutto aperitivo and Brennivín Rúgbrauð, an Icelandic cousin of aquavit, comes with a cracker topped with chef Ali Ghriskey’s rhubarb marmalade that Brooke enhances with different amari, sugar and orange peel.

“That’s one of my favorites,” she said.

Her Martini Moment is a classic martini made with gin, vodka or Salcombe pink gin and served with a whole jewel box of pickled vegetables, which vary by season but might include wax beans, snap peas, endive and peppers.

“I enjoy picking and eating while I’m drinking,” she said, “so the martini has a side of pickled vegetables.”

Andrew Paniagua, bar manager of Camphor in downtown Los Angeles, said many martini drinkers like briny snacks with their drink. 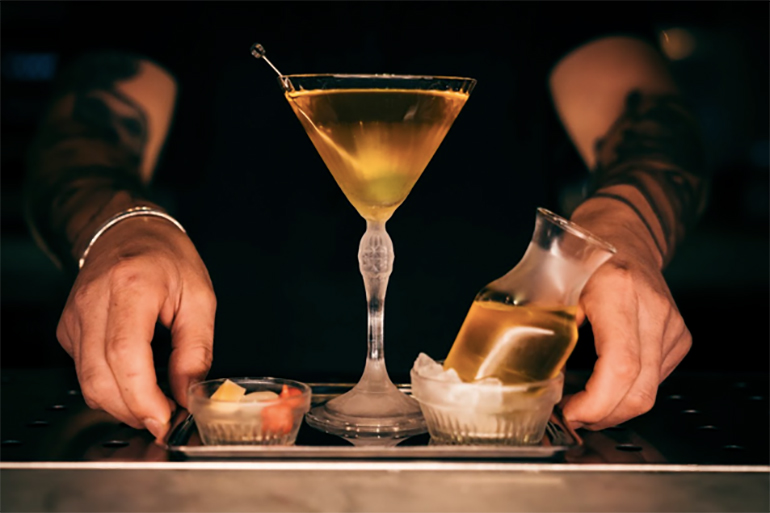 “People ordering martinis always ask for extra olives,” he said. “We wanted to take it to the next level and present it in a more elegant way.”

Hence his Provence Martini. It starts with an increasingly common mixology practice called fat washing, for which Paniagua adds olive oil and herbes de Provence (in this case a blend of marjoram, basil, lavender, sage and rosemary) to a bottle of vodka, lets it sit at room temperature for eight hours and then freezes overnight so the oil and herbs solidify. He strains it through a coffee filter “so we get this nice, clean, velvety texture and really herbaceous flavor,” he said.

That’s combined with pear eau de vie French white vermouth and a few drops of saline. He gives it a stir and serves it in a cocktail glass with Castelvetrano olives, marinated Peruvian drop peppers, goat milk gouda and a pearl onion marinated with star anise, cloves and tarragon, all on a silver platter.

He said presenting it with that kind of elegance makes it feel special. Besides, “when you get to play with your food or drinks it makes it that much better,” he said.

March Restaurant in Houston accompanies its martini with a battered and fried Gordal olive stuffed with mushroom duxelles.

“The same way a martini tasks you to slow down, so does a freshly fried olive,” bar manager Chad Matson said. Pairing olives with martinis has always made sense,” he added. “It combines herbaceous dry gin with briny sweetness to satisfy both your sweet and salty. And with a fried olive, it satisfies your hot and cold."

“Actually, I started with the garnish and then I worked out a drink that would go with it, because I love Pop Rocks,” she said.

At Birdie G’s in Santa Monica, Calif., chef and co-owner Jeremy Fox makes food inspired by childhood memories, and bar manager Stephanie Reading plays into that with Not Your Grandma’s Grasshopper, made with crème de menthe, crème de cacao, Fernet Menta, vodka and vanilla ice cream, which she serves with a minty dark chocolate cookie. 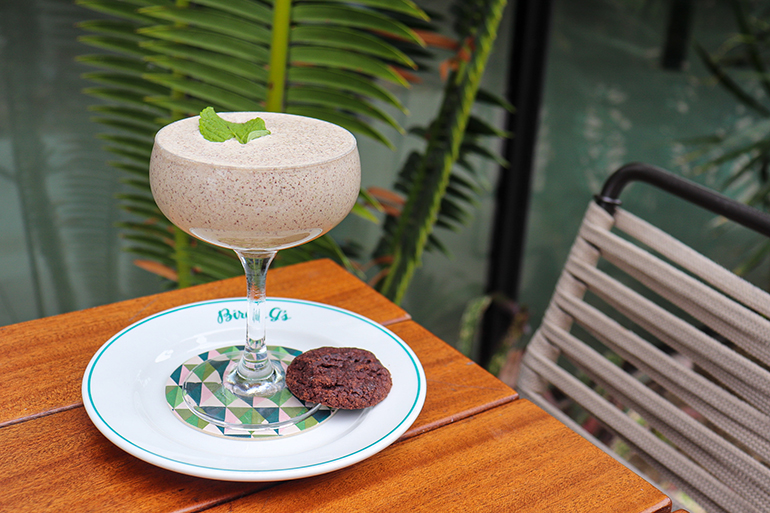 “At first, it was just a dark chocolate cookie, which was good, but not quite right with such a minty, chocolate drink. We added mint extract to the cookie, instead of the vanilla the recipe originally called for. It’s like Birdie G's take on the Keebler’s Grasshopper treat,” Reading said.

Back at PS, Brooke makes a cocktail called Untitled Homage to People That Matter of components that remind staff members of  loved ones they have lost, including an herbal aromatics elixir sprayed on top that’s meant to evoke the perfume of the co-owner’s mother, along with gin, pineapple, chamomile, passion fruit liqueur and egg white, and on the side is a piece of Regal Crown sour lemon candy that her father enjoyed.

“I was workshopping the cocktail for its flavor profile … and I actually found that the candy works best as I serve it now” on the side, she said. Also, “It feels like a sweet gift.” 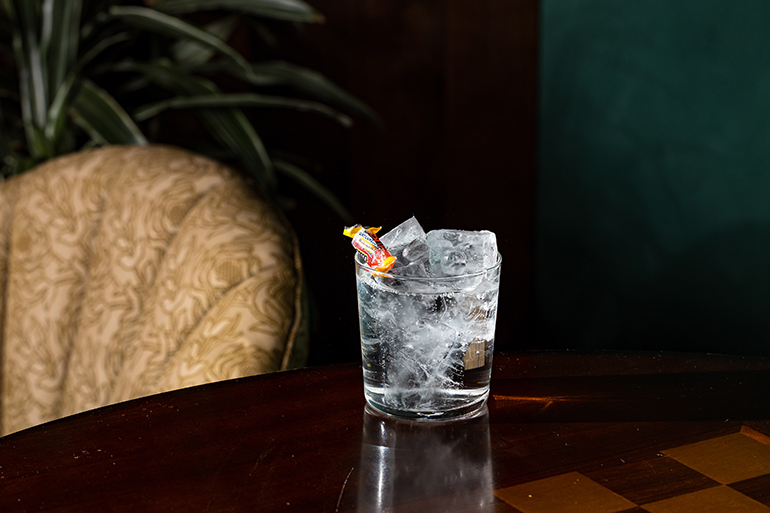 The Watermelon La Crawl at Yacht Club in Denver is made with Vida mezcal, watermelon, Dolin Blanc and super lime, and served with a watermelon Jolly Rancher.

“This drink is a summer crusher that hits all the right bits of ’90s nostalgia, with the candy garnish being a sort of nod to the ‘dark days’ of Zima and Jolly Ranchers,” Hedges said. “Though I think we’re offering it in a more relevant and delicious way.”