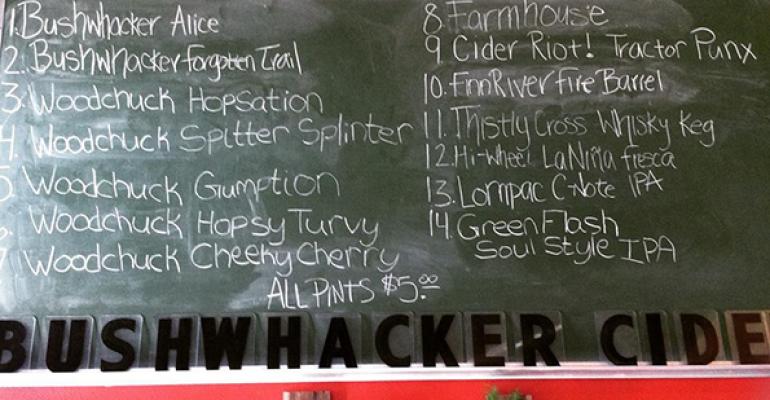 Cider: Plenty of growth on tap

We'll find out soon whether cider-focused gastropub concepts have long-term viability in the restaurant world. But now that trend-watchers tab cider as the beverage to watch, beer manufacturers view it as a growth category they have to be in, and analysts see cider as a long-term threat to beer and wine consumption, restaurant operators who have yet to make a serious push on cider may want to think about upping their game.

Trend trackers were prescient in their forecast for cider.

"The craft beer movement has paved the way for an influx of artisan ciders," is what Andrew Freeman wrote in his company's 2015 trend preview. "On tap, in bottles and even in the can, these easy drinking, sweet-yet-tart beverages are a welcome addition to bar menus."

"Hard cider will take off next as beer brewers enter the market to protect their businesses...food-friendly, low-alcohol, gluten-free...even seducing non-drinkers," is how restaurant consultants Baum & Whiteman saw it in 2014.

The major beer brewers got up to speed on cider in a hurry. Among them: Heineken USA (cider brand Strongbow); MillerCoors (Smith & Forge); Anheuser-Busch (Johnny Appleseed); and Boston Beer (Angry Orchard).

Business analysts see a bright future for cider, too. Netherlands-based global lender Rabobank thinks cider is on a tear, to the point where it has become a threat to competing beverage categories. The fastest-growing market is the U.S. where case sales of cider tripled between 2012 and 2014.

One reason why: cider's customer demographic has changed in a way that's favorable for restaurants and bars.

"In the past decade, the cider category has gone a long way to discard its old-fashioned image and connect with a new wave of consumers," says Rabobank analyst Mark Soccio. "The relative appeal of cider to younger consumers—both male and female—presents a real threat to competing alcoholic beverage categories."

In particular, wine producers should watch out.

Cider might be consumed more like beer, but the wine industry needs to come to terms with the fact that cider is not solely a threat to the beer category, Soccio notes. The impact might still be at the margin, but wine companies need to seriously consider what might lead their current and future consumers astray.

Analyst Rakhee Sturgess at UK market research firm Canadean also sees a bright future ahead for cider. His prediction is that the U.S. cider market will grow at an average annual rate of 12 percent between 2015 and 2020. The rest of the world will experience a slower annual rate of five percent.

"The launch of new and innovative ciders will cause this growth, as will the introduction of cider to new regions in the U.S.," Sturgess says. "More consumers will discover the beverage and change from beer and other flavoured alcoholic drinks to cider."

Who are these new cider consumers? Here's an analysis from Mainstreet, the online magazine of financial website TheStreet.com.

"Roughly half of cider's consumer base is made up of women, compared with about 28 percent for beer, according to Nielsen," the site says. "It's also gaining momentum with younger drinkers. While Baby Boomers and World War II-era beer drinkers are 41 percent to 69 percent less likely to pick a cider than the average drinker, Generation X is one percent more likely to choose a cider, while drinking age Millennials are more than twice as likely to go with a cider. While women have no problem picking up cider, they're 38 percent to 46 percent less likely to pick up domestic, imported or craft beers than their male counterparts."

Numbers like these have convinced a handful of operators to go all in on cider. Among the pioneers:

• Bushwhacker Cider in Portland, whose first unit opened in 2010, bills itself as the first continuously operating cider pub in the U.S. It offers five house-crafted ciders and a 350-bottle and can list. Its simple five-item menu is headlined by cheese and charcuterie plates.

• Scrumpy's in Fort. Collins, CO, offers cider flights in three different sizes (10, 9 and 8 samples) drawn from among its 18 ciders offered on tap. Some of the options are made in-house by sister operation Summit Hard Cider Company. A menu of sandwiches and sweets rounds out the offerings.

There are other cider-centric restaurant concepts in the U.S., but the list compiled by industry watcher Cyder Market puts the current number at just 25. Expect more soon. If the analysts are right, the cider segment is wide open, and it can accommodate many more operations than are in it now.