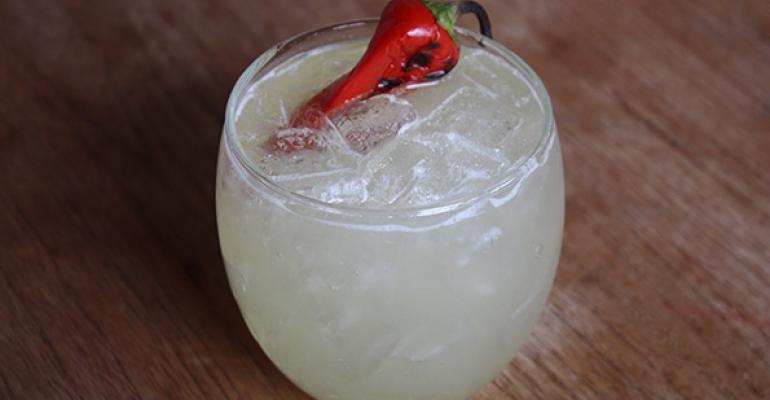 Margaritas at Kachina Southwestern Grill in Westminster, CO, take on an adjustable note of heat, thanks to a housemade scorpion pepper tincture. The Controlled Burn ($10) is made with Milagro Silver tequila, fresh-squeezed lime juice, pineapple juice, Green Chartreuse, simple syrup and scorpion pepper tincture. The scorpion pepper’s Scoville Scale heat ranking is between 1,500,000 and 2,000,000 units, making it one of the hottest in the world. The Controlled Burn cocktail gets its name from the fact that bartenders can control the heat level by the number of scorpion tincture drops they add to the drink. Just for the record, four drops is the average added amount.

Urban Farmer in Cleveland offers a chili-infused cocktail. The Everything Nice ($12) is a combination of Balvenie DoubleWood scotch, amaretto and chili-infused cider. The steakhouse menu features a Midwestern flavor with locally sourced ingredients. Cocktails at Urban Farmer are enhanced by local craft spirits.

A hint of hot sauce adds spicy flavor and a little color to selected cocktails at The Original Dinerant in Portland, OR.  Chef AJ Voytko ages tequila in the same barrels in which he ages and ferments his house-made hot sauce. The spicy tequila is used in the restaurant’s Bloody Maria (a tequila version of the Bloody Mary) and the Super Duper Spicy Margarita.

Meanwhile, at The Cecil in New York City, the Afro-Asian-American menu is complemented by cocktails incorporating traditional African spices and flavors. For example, the Amina cocktail ($14) is a mix of Elijah Craig Bourbon, African baobab fruit powder, chili pepper-infused molasses and lime. Check out these other spicy ideas, too.