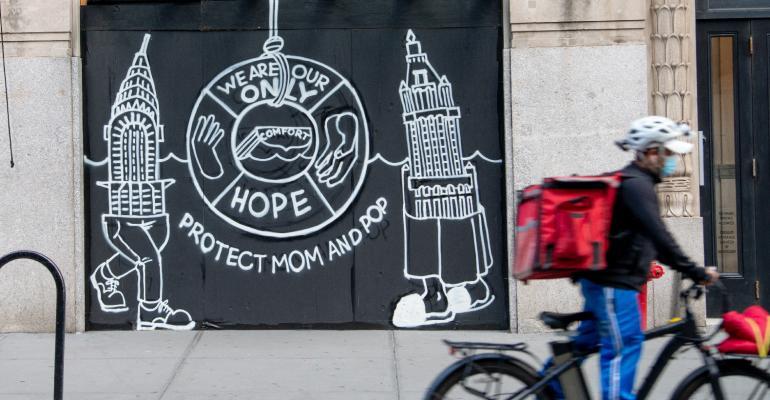 An antitrust suit filed this week accuses Postmates, Uber and Grubhub of monopolizing delivery prices by not allowing restaurants who contract with them to sell menu items to consumers at lower prices on other platforms, including direct orders from the restaurants.

“Defendants do this because if the restaurants were to offer lower prices for sales outside each defendant’s platform, then such pricing would reduce the restaurants’ sales on the platform and reduce the defendant’s profits,” according to the lawsuit filed by Philip Eliades, Jonathan Swaby, John Boisi and Nathan Obey, all residents of New York.

As a result, the suit states that “these anticompetitive agreements prevent both restaurants and other platforms from competing with defendants and thus force all consumers to pay supracompetitive prices.”

Grubhub declined to comment. Uber, which owns Uber Eats, and Postmates did not return a request for comment. The lawsuit was filed the same day Uber Technologies announced plans to buy San Francisco-based Postmates in an all-stock deal valued at $2.65 billion.

Delivery market leader DoorDash was not named in the suit.

In announcing its acquisition of Postmates, Uber said the merger would result in lower commission fees for restaurants, and more choices for consumers. However, the company didn’t elaborate beyond that.

The lawsuit, however, said the third-party delivery players named in the suit are “exploiting without procompetitive justification their dominant position in the fast growing market for delivery and takeout through internet-based platforms that aggregate the offerings of multiple restaurants.”

With commission rates running as high as 30% on each order, some restaurant chains have found a workaround that appears to conflict with allegations made in this lawsuit, according to reporting by Nation’s Restaurant News.

Del Taco, for example, sells a BRC Burrito on its app for $1 for pickup orders. That same burrito is sold for $1.20 on Grubhub, according to prices listed on each app as of Thursday.

Dan Simpson, CEO of Taziki’s, told Nation’s Restaurant News in a recent podcast that prior to the COVID-19 pandemic, third-party delivery companies did not allow restaurants to engage in premium pricing on their platforms. Some have since softened their position, allowing pricing to be higher on the delivery platform as compared to the restaurant.

Separately, Simpson said delivery companies have required Taziki's to have the same price across competing delivery platforms. “"So if we sell a gyro for $10 on Grubhub we have to also sell it for $10 on Postmates,” he said.

When the pandemic hit, Simpson said Taziki’s expanded its third-party delivery operators to include Postmates, Grubhub and DoorDash. He said all three are okay with Taziki’s keeping its in-house prices lower than what’s listed on their delivery platforms.

In November 2019, El Pollo Loco, which works with DoorDash, Postmates and Uber Eats, said it marks up prices on third-party marketplaces.

“We don’t see resistance necessarily from the more elevated pricing that we’re charging in those channels,” Acoca said in November. “I think consumers there are looking to pay for convenience, first and foremost. And so we’re kind of enthusiastic and excited about the progress we’re making with these providers.”

That runs counter to what is stated in the lawsuit.

“MFNs prohibit restaurants from selling menu items at a lower price to consumers who order directly from restaurants, regardless of whether those orders are for takeout, delivery, or sit-down, and regardless of whether those orders are made online, in person, or over the phone,” according to the lawsuit. “Under these MFNs, for example, a restaurant that lists an item on defendants’ platform for $10 is contractually prohibited from selling that item for $9 to a consumer who calls the restaurant to order that item for takeout.”

Lawyers for Eliades, Swaby, Boisi and Obey did not return a request for comment when asked about premium pricing tactics.

The lawsuit comes as delivery has become a crucial channel for earning revenue for operators forced to close dine-in operations to curb the spread of the coronavirus. Adoption of third-party delivery accelerated, leading to a surge in orders.

Before the pandemic, delivery represented 3% of all restaurant orders. It’s now grown to 7% of orders, according to the latest market research from The NPD Group.

But the pandemic has also shed light on the growing frustration among restaurant owners who say that hefty commission fees erode already thin profit margins.

According to the latest data from ecommerce research firm Edison Trends, DoorDash has dominated market share in the delivery space for more than a year. The company’s market share in April, based on millions of transactions, was 45%, ahead of Uber Eats (28%), Grubhub (17%) and Postmates (7%).