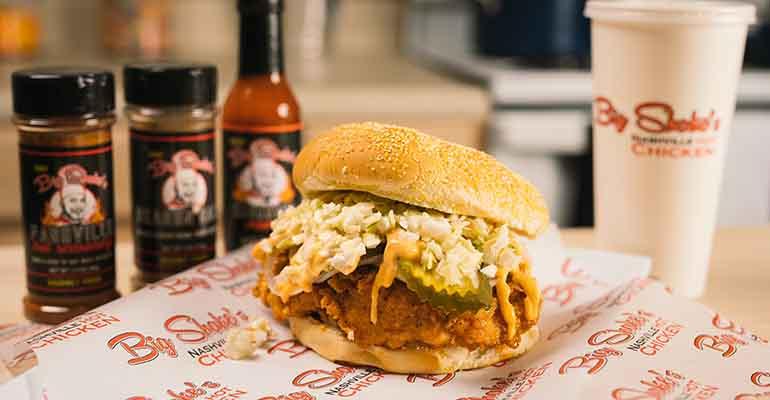 When much of the restaurant industry was reeling from pandemic-related closures and staffing issues, Big Shake’s Hot Chicken & Fish was doubling down on its hot chicken concept.
Operations>Delivery & Takeout Solutions

When much of the restaurant industry was reeling from pandemic-related closures and staffing issues, Big Shake’s Hot Chicken & Fish was doubling down on its hot chicken concept.

The restaurant, which opened its first location in Franklin, Tenn., in 2014 and today has four company-owned stores across Tennessee and Alabama, has several more locations in the works, including one in downtown Nashville that’s preparing to open in February. While expanding the physical footprint of its fast-casual, counter-service operation, Big Shake’s also went virtual, launching a shipping business to reach customers outside of its regional sweet spot.

“Even before COVID, we were getting requests from out-of-state customers who asked if we could ship them our products,” said Big Shake’s chef and owner Shawn Davis, aka Big Shake. “During COVID, those requests exploded, so we decided to invest in a warehouse and a new cooking facility to efficiently run that side of the business.”

Big Shake’s started out using Goldbelly, the popular platform that ships food and gourmet products directly to consumers. But soon thereafter, they were one of 25 restaurants around the country asked to join Doordash’s new Nationwide Shipping pilot program. After about a year of testing, the initiative officially rolled out in November 2021.

Now, anyone with the Doordash or Caviar app can order Big Shake’s, with shipments completed in a few days and many qualifying for free shipping. Customers can also order food and retail products online via the restaurant’s dedicated shipping website. The Nashville hot chicken family dinner pack ($90) is a best-seller and features enough chicken (available in multiple heat levels), mac and cheese and white beans to feed four people. Other options include chicken and waffles ($99, serves six), wings and shrimp burgers, plus hot sauces and seasonings. Cooked food arrives frozen, complete with quick reheating instructions that Davis said are so easy, anyone with an oven can follow.

To meet demand, Big Shake’s had to expand outside its restaurant kitchens. They hired eight employees to work in the warehouse, where they handle incoming orders and send out shipments.

“It was a big investment,” said Davis. “We were pretty nervous, but happy to get it done.”

He admits they made some mistakes in the beginning and had trouble keeping up with early demand, but they learned on the fly and worked out kinks as they popped up.

“The biggest thing is having the right inventory on hand, because demand changes,” he said, with a nod to restaurateurs charting a similar course. “Going from a restaurant to a full-blown fulfillment center, there’s a lot to take into account, like coolers, dry ice and shipping costs. You need all that figured out before you can scale the business. We overcame it pretty quickly, but we’re still learning every day.”

Davis’s plate is full, but he still has room for more. He said that Big Shake’s is opening restaurants in Tampa and Tuscaloosa, Ala., and after some COVID-related slowdowns, they’ve got franchise disclosure documents ready and are actively looking for opportunities to expand.

“Today people can get our food and products anywhere in the country,” said Davis. “And hopefully one day, they’ll also have a Big Shake’s down the block.