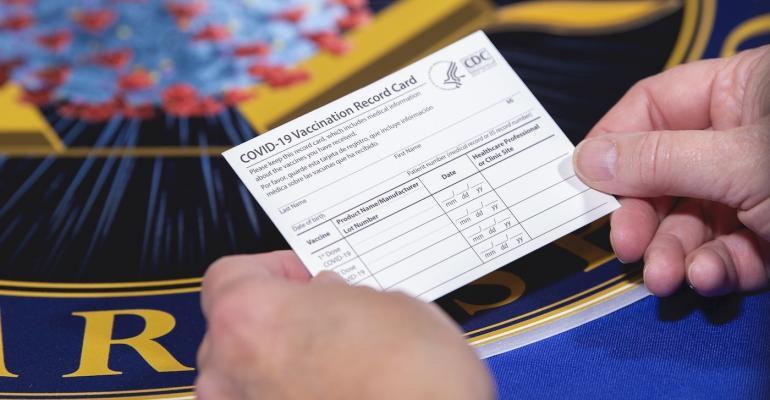 Philadelphia, San Francisco, Baltimore and Dallas are among the growing number of cities requiring masks or vaccines for indoor dining

After the Centers for Disease Control and Prevention changed its mask guidance in July to recommend that some vaccinated people begin wearing masks again as the COVID-19 delta variant surges throughout the country, local municipalities started to reinstate mask mandates for indoor businesses and some are even instituting vaccination proof requirements for indoor dining, like New York City, which will begin enforcing proof of vaccination to dine at restaurants indoors starting Sept. 13.

Over the past month, COVID-19 cases have more than quadrupled nationwide, mostly driven by the delta variant, with 31% of the eligible U.S. population still unvaccinated.

We rounded up the latest cities, states and businesses requiring masks for indoor businesses, proof of vaccination for indoor dining or restaurant workers, or are heading in that direction:

Related: Mask up again, in areas where COVID cases are climbing, the CDC says

Baltimore – Baltimore instituted an indoor mask mandate beginning Aug. 9 at 9 a.m. for all public and private indoor spaces within the city limits. In nearby Anne Arundel County, masks are required for all government buildings and Montgomery and Prince George counties just outside of Washington, D.C. also implemented mask mandates for all indoor businesses, which went into effect the weekend of Aug. 7.

According to CDC data, Baltimore is in an area of “substantial” transmission with 50.9 COVID-19 cases per 100,000 residents. The CDC is strongly recommending wearing masks in areas of substantial or high transmission.

Dallas — In defiance of Texas Gov. Greg Abbott’s ban on mask mandates, both Dallas and San Antonio’s Bexar County instituted local indoor mask mandates. On Tuesday, judges granted both county officials a temporary restraining order, blocking Abbott’s ban on mask mandates. Both decisions are temporary, pending hearings. In San Antonio, Judge Antonia Arteaga’s final decision will be made on Monday, while in Dallas, Judge Parker’s decision will remain in place until Aug. 24, pending the final hearing, according to the Texas Tribune.

In response to this court decision, Abbott and state Attorney General Ken Paxton are seeking to block the local mandates.

“Attention-grabbing judges and mayors have defied executive orders before, when the pandemic first started, and the courts ruled on our side — the law,” Paxton said in a press release. “I’m confident the outcomes to any suits will side with liberty and individual choice, not mandates and government overreach.”

Durham, N.C. – Durham announced a state of emergency on Aug. 7, that went into effect Aug. 9, and includes indoor mask mandates for all, even those who are fully vaccinated. North Carolina’s original mask restrictions had ended July 30, but now Durham is masking up again because of the delta COVID surges.

Orange County, N.C. – Orange County in North Carolina announced a countywide mask mandate for indoor businesses that went into effect Aug. 11. At 5 p.m. The mandate requires all patrons 2 years of age or older to wear masks in public or private indoor spaces except when actively eating or drinking. The towns of Chapel Hill, Carrboro and Hillsborough are included in this mandate.

Hartford, Conn. – Hartford, Bridgeport, Stamford and Norwalk are joining Newport in requiring mask mandates for all indoor restaurants and businesses, the cities’ officials announced this week, according to the Hartford Courant. Hartford and Bridgeport’s mask mandates went into effect Wednesday, Stamford’s went into effect Thursday, while Norwalk will require masks beginning Friday. Gov. Ned Lamont said he would not institute a statewide mandate but would let local states and counties decide for themselves.

Oregon – Oregon residents will need to begin wearing masks in indoor businesses starting Friday, Gov. Kate Brown announced, after it became clear to her that “local officials were not willing to make tough decisions” to re-institute COVID-19 restrictions in the wake of the delta variant. The original mask mandate was lifted six weeks before as vaccination rates climbed, according to Oregon Live.

Philadelphia – On Wednesday, Philadelphia health officials announced that the city would require that masks be worn at all indoor public spaces and private businesses, beginning Thursday, unless the business already required proof of vaccination.

"That means everyone in Philadelphia must wear a mask when going into any business or institution, with an exception for those that require vaccinations. Restaurants and bars will need to require masks for all staff and customers, except when people are seated and actively eating and drinking," Acting Health Commissioner Dr. Cheryl Bettigole said in a statement.

Customers will need to carry vaccination cards for those businesses that require proof of vaccine status.

Los Angeles – Los Angeles officials are one step closer to requiring vaccines for patrons of indoor restaurants, bars, gyms, shops, movie theaters and event venues.  On Wednesday, the City Council voted to draft a law that would require proof of vaccination for many private businesses. Once the law is drafted, it would go back to the City Council for final approval, according to the Los Angeles Times. Already in Los Angeles County, county workers must provide proof of vaccination to remain employed.

New York City – While New York City’s vaccine verification rules do not go into effect until September, the city released a list of 30 businesses that are testing out the policy, which requires patrons to show proof of at least one vaccine shot.

The businesses include several iconic New York City restaurants and bars like City Winery, Death & Co., Dirt Candy, Ladybird, The Bell House, and the Queensboro. A full list can be found here.

San Francisco —Mayor London Breed on Thursday said all businesses that serve food or drink — including restaurants, bars, clubs, theaters and entertainment venues — must obtain proof of vaccination from their patrons and employees for them to go inside the facilities. This does not include those who are picking up food or drink to go. Masks are also required to enter businesses, even for those who are vaccinated. The mandate goes into effect Aug. 20 for patrons. Employers have until Oct. 13 to validate proof of vaccine for workers.

ThinkFoodGroup -- Chef José Andrés‘ ThinkFoodGroup announced Wednesday that the restaurant group would begin requiring proof of vaccination for all indoor dining patrons aged 12 and older for their restaurants in the Washington, D.C. area. These restaurants include Jaleo, Zaytinya, China Chilcano, Oyamel, barmini/minibar, according to Washington City Paper.  He joins a growing number of isolated restaurants nationwide that are also instituting proof of vaccination requirements, like Danny Meyer’s Union Square Hospitality Group.