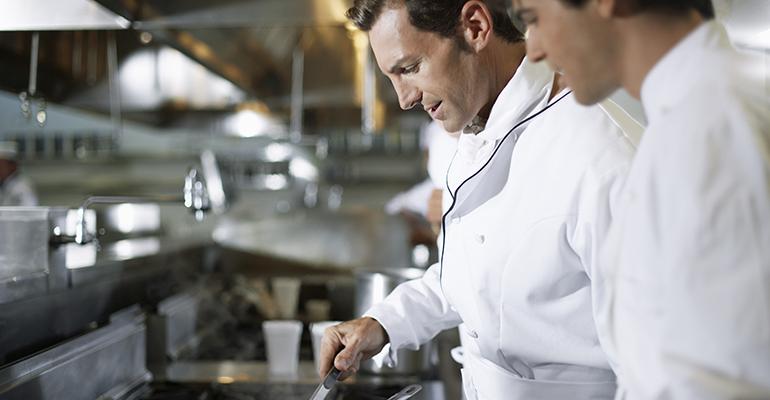 <p>Higher wages should attract workers in the front and back of the house.</p>
Trends>Consumer Trends

Tipping elimination (aka service compris) is a hot topic that recently attracted significant attention when Danny Meyer's Union Square Hospitality Group, based in New York City, announced it will eliminate tipping at Gramercy Tavern, Union Square Cafe and its 11 other restaurants by the end of next year.

At the same time, media outlets including the Washington Post, Food and Wine and Fortune have chronicled the growing chef shortage that plagues restaurants around the nation.

As an immigration lawyer whose clients regularly sponsor chefs and other restaurant workers—particularly Europeans—to work in the U.S., I am intrigued by the question:  is there a connection between these two trends?

The motivation behind the move toward service compris is complex.

It is partially an attempt to pay servers a more predictable wage. By offering compensation that doesn’t depend on unpredictable variables such as customer whims, the weather and the economy, restaurants hope to attract a dedicated, professional pool of labor rather than opportunists seeking to make a quick buck.

Secondly, it may be intended to redistribute some part of the service charge to pay for benefits for all employees. When The French Laundry, one of the frontrunners in the service compris movement, implemented the policy, they were able to offer healthcare and retirement benefits to all employees—a rare thing in the restaurant industry (and something that would otherwise be hard to pull off given the historically low profit margins in the industry).

A third factor behind the service compris trend may be the desire to even out the wage gap between poorly paid kitchen workers and more generously compensated front-of-house staff. It’s no secret that servers make substantially more than cooks, in terms of total annual compensation.

The State of New York recently raised the minimum wage for quick-service restaurant workers to $15 per hour. While non-quick-service restaurants are not subject to this wage requirement, they are competing with QSRs for a limited pool of labor, and thus need to offer similar wages to say in the game. Other localities including L.A., Seattle, San Francisco and the California cities of Oakland and Berkeley have also implemented wage increase legislation for kitchen workers.

Overall, the tipping elimination trend, if it achieves the above goals (a more predictable wage for servers, benefits for all employees and increased pay for kitchen workers) would likely help decrease the domestic chef shortage, as higher wages and benefits would attract more talent to the kitchen.

At the same time, by creating a system that is closer to that in Europe, it is expected that restaurants will decrease their need to recruit and sponsor qualified staff from overseas.

In very simple terms, employment-based immigration trends are based on regional differences in the available pool of labor. Companies sponsor workers from overseas because those workers have attributes (skills or abilities) that are not available in the local labor market.

A recurrent theme among the top restaurants I represent is “we sponsor staff from overseas because in Europe, hospitality is considered a profession. In the U.S., it’s often a stepping stone to another career. Americans just don’t take restaurant jobs seriously.” From this perspective, offering more predictable wages to front-of-house staff, higher wages to kitchen staff and more benefits to all restaurant employees should be a way to attract more serious, career-minded U.S. workers to the field.

One open question is whether overall restaurant service may suffer as a result of the tipping elimination trend. Some restaurant servers are attracted to the field because of the opportunities it offers to make quick cash by providing excellent customer service. If service compris becomes the norm, will these financially motivated types find work elsewhere? If so, it could potentially have the perverse effect of creating a labor shortage in the front of the restaurant, to be filled by Americans (or foreigners) looking less for short-term financial gains and more for long-term job stability and security.

Becki Young, cofounder of Hammond Young Immigration Law and head of the firm's hospitality practice, is a seasoned business immigration attorney with 20 years of experience in the field. She has facilitated the sponsorship of foreign professionals, trainees, interns and individuals of "extraordinary ability" in finding employment in the hospitality industry in the U.S.