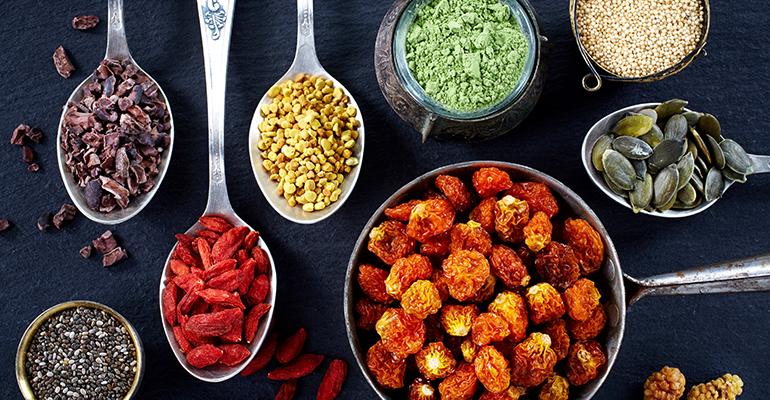 <p>Superfoods have been in the news for years, but consumer momentum in that category seems to be building.</p>
Trends>Consumer Trends

Superfoods remain popular among consumers, despite a dearth of hard evidence that they promote health. And manufacturers are listening.

According to Mintel, the years between 2011 and 2015 saw a phenomenal 202 percent increase globally in the number of new food and drink products launched containing the terms “superfood,” “superfruit” or “supergrain.” These products are touted as providing health benefits.

Last year alone 36 percent more super-something food and drink products were launched. The U.S. led in the most introductions.

The stakes are considerable. According to Mintel, more than seven in 10 consumers in France (72 percent), Germany (71 percent), Italy (73 percent) and Spain (72 percent) agree that health-promoting benefits of natural foods such as fruit and vegetables are preferable to the added benefits of functional foods.

Mintel research also reveals that the superfood sensation has spread beyond food and drink. While 43 percent of products launched globally 2011-2015 with the words “superfood,” “superfruit” or “supergrain” in the product description were in the food category and 11 percent fell under the drink category, the remainder were in the beauty and personal care, health and hygiene or pet categories.

A big factor in the growth of supergrains, or ancient grains, is the trend toward a wheat-free diet. While quinoa and buckwheat have both become household names in recent years, Mintel says chia has seen the biggest rise in usage. Between 2014 and 2015, there was a 70 percent increase in the percentage of food and drink products launched containing chia, while new food and drink products containing teff rose by 31 percent. Meanwhile, the number of quinoa products rose by 27 percent.

“While the number of products containing ancient grains has been rising, next we could see the popularity of sprouting ancient grains,” says Stephan Mattucci, global food science analyst at Mintel. “The ancient, accidental process of sprouting, where whole grains are soaked and left to germinate, has largely been eliminated by modern processing techniques. There has been a return to this ancient practice, with controlled sprouting practices being introduced, as the nutritive advantage of sprouted grains is being recognized.”

Going forward, Mintel research suggests that turmeric (known for its anti-inflammatory benefits) and moringa (said to have beauty and anti-aging properties) could be the superfoods to watch.

“Turmeric has potential as an ingredient in supplements and functional food and drink products, particularly within products aimed at the growing senior population. Additionally, moringa could be used in anti-aging beauty food products. While currently the ingredient is used in many beauty launches, the leaves are nutritional powerhouses,” Mattucci observes.

Restaurants—aside from some niche concepts that cater to health-obsessed eaters—seem to be way behind the superfoods curve. Even if they do work superfoods into the menu, few chefs are talking about it. Cheesecake Factory, with its “Super” Foods menu section, is a notable exception. The chain has shrewdly positioned itself to satisfy the desires of a broad customer base by balancing indulgent treats with health-halo choices. Maybe it's time for more restaurants to follow that lead.