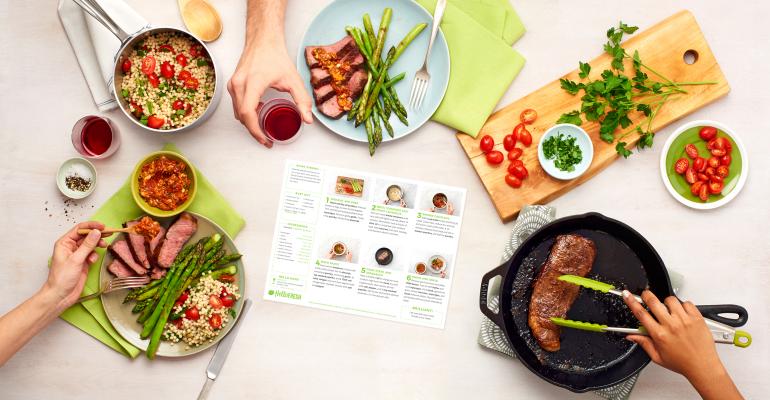 Restaurant rivals aren't who you think they are

The already heated competition for butts in seats in the independent restaurant industry is about to get hotter. But the biggest threat to market share comes not from the restaurant down the street, but from outside the industry.

Restaurant operators may soon see themselves losing guests to the local grocery store offering cooked-to-order meals and table-service, along with a full bar.

At the same time, the young-but-full-of-potential meal-kit industry is also out to steal diners from restaurants, offering quality and unique ready-to-cook-dishes — often at a lower price — directly to consumers where they live.

And there’s potential cross over between the two. Grocery stores are also beginning to offer meal kits to appeal to the growing number of consumers who don’t know how to cook, or don’t want to.

This year e-commerce giant Amazon bought the specialty grocery chain Whole Foods Market, a move that has sparked a wave of speculation about how Americans will be enjoying the home delivery of all manner of fresh ingredients and pre-prepped meals in future. Behind both of these trends is a common theme: Time-starved diners across the country are looking for convenience.

Consumers want to eat well, but the pull of the couch at home is strong. The one-stop shopping of the “grocerant,” and the home-delivered ready-to-cook meal kit give diners two more reasons to skip the neighborhood bistro.

In the spirit of knowing one’s enemy, here’s a look at the growing threat from grocery stores and meal kits.

Grocery stores get into the restaurant business

For years, restaurants have had to compete with grocery stores, with their in-store delis, rotisserie chickens and salad bars.

Last year, however, eating meals outside the home surpassed those eaten at home, and the grocery industry felt the jolt of a shift in consumer behavior.

Seeing that shift, grocery stores are looking for ways to increase foot traffic and win that spending back. The result is an innovative wave of restaurants within grocery stores with cooked-to-order menus, beer, wine and cocktails. Some are fast casual, but some have full table service.

Whole Foods, for example, for years has been adding restaurants to stores in partnerships with known chefs and brands like the sandwich chain Mendocino Farms, the vegan burger concept Next Level Burger and the vegan chain By Chloe. At a store in Philadelphia, Whole Foods has a “Restaurant Row” with Israeli concept Dizengoff by Michael Solomonov and Steven Cook; an Asian restaurant Cheu Noodle Bar by Bun Puchowtiz and Shawn Darragh of Bing Bing Dim Sum fame; and the Italian-American concept Severino Cucina Rustica by chef Marc BrownGold.

But Whole Foods is developing its own in-house restaurant brands as well, creating small food halls within their markets.

In September, Whole Foods opened a unit in Buffalo, N.Y. with a community café including outlets serving craft beers, grass-fed beef burgers, kabobs, sushi and pizza and more. The store was also the chain’s first to host a bocce ball court, inviting guests to gather, eat, drink and play.

In Dallas a new store includes a pub, a self-service desert outlet and fresh pizza. It Atlanta, there’s a fast-casual Brazilian concept serving churrasco bowls with beer, wine and cocktails.

Grocery giant Kroger Co. is also making no secret of intentions to move into the restaurant space.

Kroger CEO Rodney McMullen hopes to redefine the market as “share of stomach,” rather than share among traditional grocery stores, he said while reporting second-quarter earnings for the Cincinnati-based chain in September.

“We know that the massive $1.5 trillion U.S. food market creates a unique and sustainable growth opportunity for Kroger,” he said. “We see anyone who sells food as competitors in the future.”

In September, for example, Kroger planned to open a store in Union, Ky., with a restaurant called Kitchen 1883 — a reference to the year Kroger was founded — offering “New American comfort” food.

Hy-Vee Food Stores in recent years has been adding full-service restaurant and bar concept called Market Grille to stores. With a broad menu of steaks and chops, pastas, salads, sushi, Thai-inspired bowls, seafood and chicken and all-day breakfast, Market Grilles are in more than 100 store locations, including some as a fast-casual express variant.

Hy-Vee Inc. in August also announced plans to become a franchisee of the Wahlburgers restaurant chain, which Hy-Vee CEO and President Randy Edeker described as “a bold step to deliberately evolve our business to meet the change in our customers’ lifestyles and spending habits.” The grocer plans to build and operate 26 Wahlburgers locations in seven Midwestern states, more than doubling the size of the 17-unit restaurant chain.

In addition, Hy-Vee will add Wahlburgers menu items to its Market Grille restaurants in stores. The first Hy-Vee-owned Wahlburgers unit is scheduled to open in Des Moines, Iowa, in mid 2018.

Meal kits zero in on convenience

The grocery industry is also under threat from the growing crop of meal-kit providers, online services through which guests can order ingredients ready to cook at home.

Born roughly five years ago, what began with a handful of players, like Blue Apron, HelloFresh and Plated, has grown in to a crowded field with backing from powerful venture capitalists.

MarketResearch estimates between $1 billion and $1.5 billion meal kits were sold in 2016. Wall Street analysts with Piper Jaffray estimate the market will reach $4 billion near term and $36 billion in annual sales by 2026.

However, a disappointing initial public offering by meal-kit leader Blue Apron earlier this year has created some skeptics about those predictions. After an IPO in June, Blue Apron’s stock price was down nearly 48 percent by early September.

The potential competition created by Amazon’s acquisition of Whole Foods was partly to blame, but the company also reported  worse-than-expected second-quarter results revealing the meal-kit company’s challenges in retaining customers.

As meal-kit players move into new markets, generous discounts are being used to get potential customers to sample and loyalty is weak.

Meanwhile, Amazon has been building its online grocery business for years, most recently adding Whole Foods private-label products to its AmazonFresh delivery service. Earlier this year, Amazon also applied for a trademark of the term “We do the prep. You be the chef,” indicating it will be used to market prepared food kits.

Some speculate that grocery stores will also get more into the meal-kit game. A report from tech news site The Information in September indicated grocery giant Albertsons Companies, which owns Safeway, has discussed the purchase of the meal-kit company Plated, for example. Purple Carrot is part of the growing wave of meal-kit providers. Its offerings target consumers interested in plant-based eating.

Canadian grocer Metro Inc. recently invested in the meal-kit start up Miss Fresh with plans to offer the meal solutions both in stores and benefit from sales online, according to Supermarket News.

In May, Whole Foods on the West Coast partnered with the meal-kit provider Salted to create pre-prepped meal options for shoppers to pick up in stores. Salted meal kits are also available in Gelson’s markets. And Kroger is piloting a Prep+Pared meal kit line at stores in Cincinnati.

Given the bumpy start, is the meal-kit industry a real threat to restaurants?

“As the meal-kit market expands, the restaurant industry is poised to lose millions of occasions and billions of dollars to this new form of competition,” Goldin wrote in a report earlier this year. “This adds new pressures for the industry to rethink its practices and make appropriate corrections.”

Pentallect estimates meal kits are a $2.2 billion industry today and will see annual growth of 25 percent to 30 percent over the next five years.

Goldin notes that’s a mere “rounding error” in comparison to the $1.5 trillion food industry in the U.S., and it pales in comparison with the estimated $800 billion in sales the restaurant industry is expected to see this year.

But Goldin is a believer that meal kits will evolve to meet needs of consumers in a way that could steal significant market share from restaurants.

In a June survey, Pentallect found that only about 3.8 percent of consumers said they’d tried a meal kit within the past 30 days, though 27 percent said they were interested in trying one. That leaves room for quite a bit of growth, he said.

Of those who had tried, more than half, or 53 percent, said they used meal kits for convenience, while 34 percent said they enjoyed the experience and 28 percent were motivated by the unique dining options.

But Goldin said another key factor is likely price: Meal kits are generally about $7.50 less per person than dining in a full-service restaurant. Grocer Kroger wants to build business with both restaurants and meal kits.

“By all measures, the perceived quality of meal kits is very, very high,” said Goldin. “It’s competitive with restaurant quality.”

And while restaurants are increasingly offering online ordering and delivery to meet on-demand food needs, Goldin said that won’t be enough to compete against meal kits.

“Home-delivered restaurant meals just don’t taste as good,” he said, they tend to cost more, and they add the expense of a delivery fee, taxes and tip.

Menu prices are a growing concern for consumers, and it may be a challenge to offer meals at the $10 to $12 per person price range typical of meal kits, he said.

“Restaurants have to play to their strengths,” he said. “Focus on quality and the dining experience.”