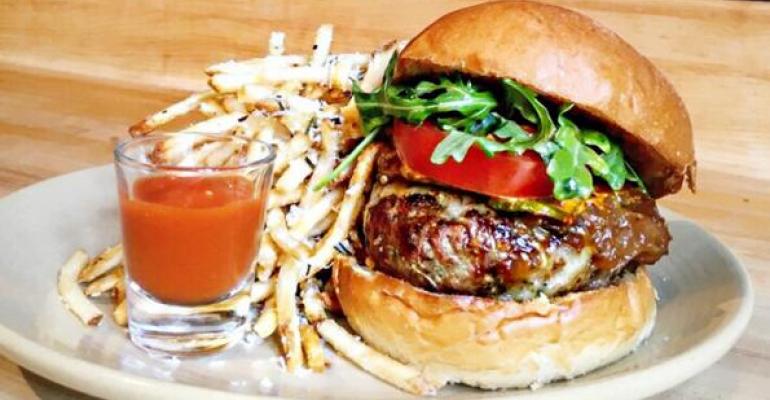 Recent research from Mintel shows that three in five (62 percent) consumers say that they love burgers. But that love, especially among millennials, increasingly extends beyond the traditional definition of a burger.

According to Mintel’s “The State of the Burger U.S. 2016” report, nearly half of consumers (46 percent) would like to see more chicken burgers on menus, while more than two in five (42 percent) would prefer more turkey burgers. Another third (34 percent) of Americans crave bison/buffalo as a burger option on more menus.

Millennials are leading the drive for for non-beef burger offerings. Three in five (58 percent) of them would like more chicken burgers and half (52 percent) would like more turkey burger options on menus. Overall, millennials are more interested than any other generation in every non-beef alternative mentioned in the Mintel survey, including lamb, seafood and vegetarian choices.

It’s probably no coincidence that millennials are also the most apt to agree that healthful menu items are the top criterion for choosing a restaurant (64 percent).

“Non-beef burgers appeal to diners for a number of reasons,” says Caleb Bryant, foodservice analyst at Mintel. “Beyond offering less fatty, more nutritious alternatives, non-beef burgers tend to have a ‘wow’ factor as they are new and different to many consumers. Having a lineup of non-beef burgers can help a restaurant’s menu stand out from other restaurants’ burger offerings.”

Beef burgers still reign, but Mintel research point to a growing taste for grass-fed beef burgers, with 43 percent of consumers in the study saying they’d like to see more grass-fed burgers on restaurant menus.

“With its purported superior taste, healthfulness claims and ‘feel good’ connotations, burgers made with grass-fed beef are an especially important foodservice trend right now. Diners today are interested not only in food that is good for them, they also want food that makes them feel good. This is magnified for food that comes with a ‘story,’ as consumers increasingly want to know where their food was made and how it was prepared and produced,” Bryant says.

Three in five (59 percent) consumers say they want to know the origin of beef in burgers. Among millennials, that figure rises to 68 percent.

Consumers are scrutinizing the buns that carry those burgers as well. Nearly half (47 percent) say they would like more premium burger buns at restaurants, and operators are apparently listening. Mintel Menu Insights reveals significant growth of pretzel (97 percent), kaiser (93 percent) and brioche (59 percent) buns on menus over the last three years.

Similarly, half (50 percent) of consumers want more variety of cheese for burgers, and restaurants are calling out specific cheese types on menus more often. While unspecified "cheese” as a topping for burgers fell by 11 percent, mozzarella (29 percent) and pepper jack (13 percent) have grown more popular on menus over the last three years.

“While burgers are a favorite for many Americans, restaurants must work hard to make their burgers stand out. Consumers are interested in new burger formulations, allowing restaurants to take chances with their menu,” Bryant observes. “This gives restaurants the opportunity to branch out with multiple ingredient options and toppings to separate themselves from competitors, and can be accomplished by offering high quality buns and cheeses, as consumers are willing to pay more for premium ingredients for a food they love.”

For the burger study, Mintel surveyed 1,767 U.S. adults who ordered a burger from a restaurant in the three months preceding January 2016.