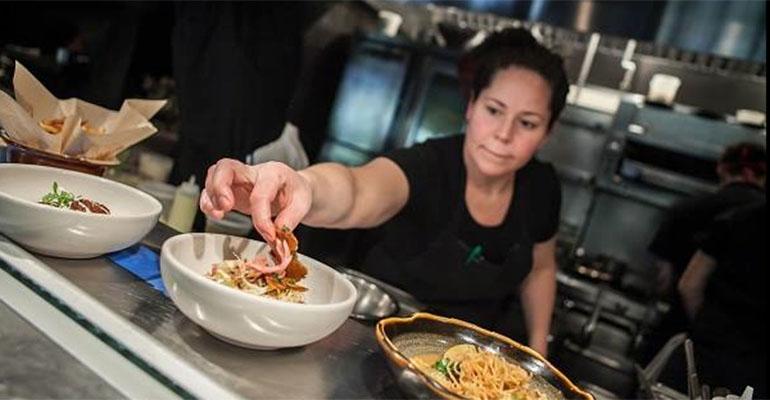 Some of the ideas found on Sterling-Rice Group’s just-released “10 Cutting-Edge Culinary Trends” for 2017 might not catch on in mainstream restaurants right away, if ever. But others could find their way onto full-service menus soon.

The key is that consumers aren’t just looking for something to eat; they’re “yearning to deepen their understanding of themselves and how they can fit into the world around them in a sustainable way,” says SRG culinary director LIz Moskow.

The question for operators is how to channel this dynamic in a way that boosts revenue and traffic. One approach could be to offer items that play into three loosely interwoven trends that appear on SRG’s list.

The first is what this Boulder, Colo.-based food-centric ad and branding agency dubs "dosha dining." SRG argues that fans of Indian food are ready to make the leap into the ancient practice of Ayurveda, “a holistic science focused on physical and emotional balance. Consumers will learn more about their doshas, or natural constitutions, and gravitate toward foods and practices that provide balance, reduce inflammation, and improve energy and stamina.”

What to serve the dosha-watchers? Migratory meals, a second SRG trend, could work.

“While host countries continue to face challenges associated with helping refugee populations, one area where these different groups are finding common ground is food. By celebrating their unique cultural heritages and cuisines, refugee populations are beginning to carve out their own culinary connections with their new home countries,” SRG suggests. “Look for menus that highlight cuisine with herbs and fresh flowers, orange blossoms, cardamom, fenugreek, sumac, pistachio, and pomegranates.”

A third 2017 trend, goat, looks to be the key protein component here. A menu rarity in the U.S, it’s a fixture of cuisines elsewhere in the world. Goat curry, for example, is a staple of Indian cuisine and fits neatly into the dosha dining trend. Likewise for migratory meals.

“Low in calories, fat and cholesterol, goat is poised to become the next go-to protein,” SRG points out. “There’s a reason that 63 percent of the world is gaga for goat — it makes a great foundation for spicy and sour preparations, can be kosher and halal and is sustainable to raise.”

It can also be a challenge to source. Immigrants from Asia, Africa and the Middle East favor goat meat and purchase much of what is available here. According to the American Goat Federation, the demand for goat meat is so high in the U.S. that only 20 percent of the current supply is domestically produced.

Goat aside, SRG identified two cutting-edge trends that might prove to be concept-worthy for entrepreneurial-minded operators. Both should provide highly favorable food costs.

Plant butchery is also one trend to watch. “A new breed of butcher shops is emerging, catering to vegans and meat lovers alike. From inside the meat display case, plant-based mock versions of chicken, ham, meatballs, steak, and charcuterie beckon to be sliced, wrapped in butcher paper and tied up with string.” Not realistic? The introduction of the meatless Impossible Burger at high-end New York and San Francisco restaurants indicates this trend may already be headed for the mainstream.

A move to reduce food waste is the third food cost-friendly trend that stands to profit some restaurants. SRG says items like watermelon rind pickles, riced cauliflower stems and similar items conjured up from once-discarded meal components have potential to boost the bottom line.

Other trends on the SRG’s radar include:

• Mocktail mixology, up to and including nonalcoholic happy hours and standard mocktail menus to sell these upscale drinks.

• Cook + connect: given the ubiquity of the sharing economy, customers crave communal dining experiences. If you’re wondering whether your new dining room should include a communal table, all signs point to “yes.”

SRG’s trend list is just one of several restaurant and food outlooks set to be released before the end of 2016. Keep watching Eat Beat for more 2017 trend news.