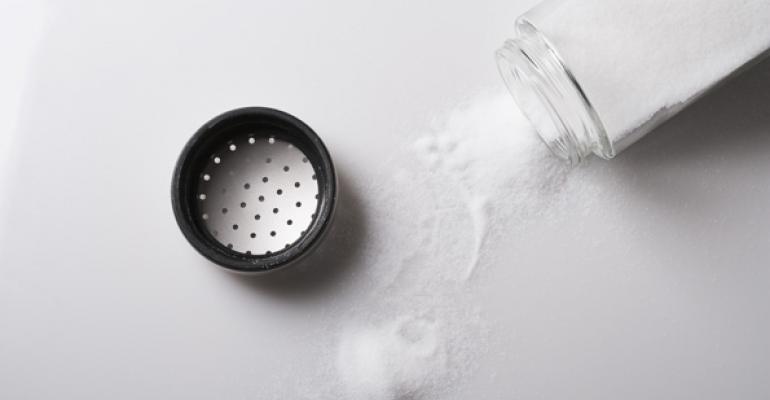 Do Americans care about sodium?

Americans care about the sodium content of their food. Or do they?

One week we hear that customers are clamoring for sodium-reduced meal options, the next week another source says we are eating fewer of those foods. The first report, research led by Healthy Dining and funded by the National Cancer Institute, says that consumers accept and usually prefer lower-sodium menu options. Healthy Dining’s registered dietitians and research team reduced salt and other high-sodium ingredients in several popular menu items at four large restaurant chains and tested the items with 1,200 frequent customers. The items, which included burgers, seafood, pasta, soups and salads, pulled in flavor ratings at least as good as the original versions.

In direct contrast to that, The NPD Group reports that while many Americans say they would like to trim the sodium from their diet, that figure is shrinking. Four years ago it was 68 percent; in 2013 it dropped to 64 percent.

“People are paying less attention to the basics on nutrition labels like sodium, calories, fats and carbs, and more attention to sugar and protein,” says Darren Seifer, NPD’s food and beverage industry analyst. NPD predicts that interest in foods labeled low sodium/salt free, low/reduced, fat/no fat or whole grain/made with whole grain will decline across most age groups over the next five years.

“Salt is an important ingredient in making foods taste good,” Seifer says. “Simply removing sodium from foods and/or beverages will likely be met with consumer resistance.”

Pizza preferences depend on demographics, according to a new study by Culinary Visions Panel.

500 consumers were given a menu of pizza combos and asked to say which one they would order in a restaurant. The options were meat lovers, four cheese, garden/vegetarian, dessert, breakfast and salad.

Consumers in the West strayed from the carnivorous norm, voting more frequently for the four-cheese and garden pizza. And the younger age group showed more interest in the four-cheese, garden, dessert and breakfast styles.

Diners in the 18- to 34-year-old group preferred green pepper, onion and mushrooms; their 35- to 54-year-old counterparts favored mushrooms, onion and olives; the oldest survey participants were keen on onion and tomato toppings.

If you’re in the coffee business, brace yourself for competition from a new corner: retail.

Foodservice sales dominate the $48 billion coffee industry in the U.S., but retailers are eating away at that share through innovation and marketing designed “to bring the coffee shop experience into consumers’ homes,” says market intelligence provider Packaged Facts.

The latest competition for coffee drinkers comes from the premium segment, with Godiva, Entenmann’s and Cold Stone Creamery extending their brands with coffee as well. And retail coffee makers are trying limited-edition blends and seasonal flavors to keep customers interested.

Shuttered a year ago, New Orleans institution Brennan’s gets a new life.

Terry White and Ralph Brennan bought the pink building at 417 Royal Street a few months ago. Last week a bankruptcy court allowed them to buy rights to the Brennan’s name along with recipes and other assets. And in the fall, after a renovation, the two expect to resurrect the storied restaurant with the help of executive chef Slade Rushing.

Brennan’s was evicted following a foreclosure auction about a year ago. In December, according to The Advocate,  a group of creditors forced Brennan’s Inc., the company that until last summer operated the restaurant, into Chapter 7 bankruptcy to collect on claims of more than $60,000.

Coming to mobile screens near you: an app that spreads the word about “sick zones.”

Viral social media may hit your business without your awareness. The latest threat comes from Sickweather, an app that monitors social media for reports of illness. Thanks to location services, the app can collect that data and alerts users when they enter a place that could be a potential health risk—because others there are currently or have been ill.

Sickweather doesn’t rely solely on passive reports of illness, either; the app also encourages users to log in when they are under the weather.

We can’t wait to see how this plays out during flu season.